In Which I am Somehow Uplifted

It's been an interesting day and mostly a very good one. It's been cooler, for one thing. Still warm enough for me to break a sweat on the walk which I took this morning. Last week, in my slugfest state, I did not walk once and this morning I knew I absolutely had to and I'm glad I did although this sight presented itself to me as I walked past my next door neighbors' house. 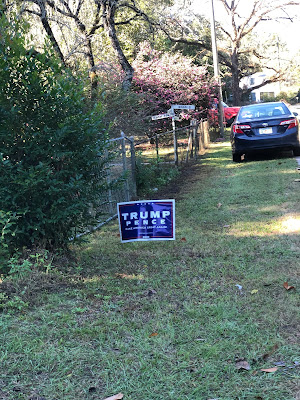 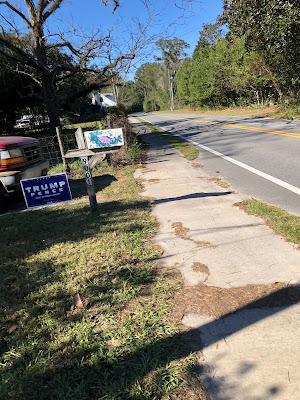 They have not only replaced the original Trump sign, they've added a new one. And the "Women for Trump" sticker which had been scraped off the back window of their car has also been replaced.
This all leads me to believe that the original sign and sticker were stolen although it's hard to believe that anyone would take the time and energy to scrape that sticker off a window.
Jesus H. Christ. Am I really going to have to look at those signs for another four years? Forever?
I have to admit that I felt downhearted, seeing these signs. One of the worst parts about them is that the new one is practically in the yard of the church which lies between our houses and it is a Black church and I have no reason to believe that our neighbors didn't put that damn horrible racist sign as close to their property line as they could.
But then this cheered me. 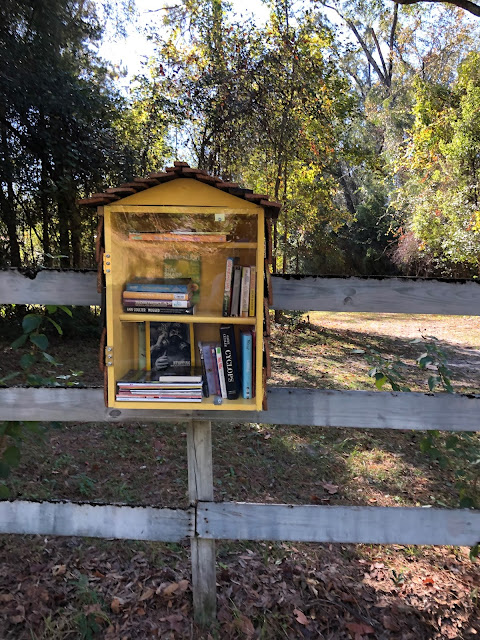 Have I mentioned that another neighbor put this up recently? It makes me so happy. I've been asking Mr. Moon to make me one for years but it's low on the project list and hasn't happened yet but having this one so near is almost as good. I have taken some books and magazines down there and put them in including one kid book that I NEVER WANT TO READ AGAIN because Owen loved it so much and I read it to him about a million times. It's an Elmo book and thus, no great piece of literature. But here's a funny thing- recently, Boud, of Field and Fen had posted about books she's reading and one of them was an Anne Tyler book. "The Beginner's Goodbye." In my comment to her post, I had said that I did not remember reading that one and I thought I'd read all of her books except for her newest one and that I needed to get a copy of it. And lo and behold what should I find in the little library today but that very same book?
It came home with me.
What a very nice coincidence!
As I was walking, a truck honked at me and pulled over and goodness, gracious- look who was in that truck! 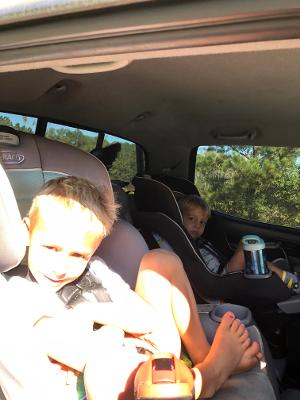 I know. I know. It's a terrible picture of two beautiful boys. Vergil was taking them to a local river and they were on their way to stop at our house to borrow Boppy's trolling motor. What a nice surprise!
And the rest of my walk was sweet. I did not walk fast but took my time and spent an hour outdoors and I had a little chat with Jacob and Emma who were sitting in their yard. I came home and hung laundry on the line and had lunch and made Mr. Moon's lunch and then I put on my gardening overalls and went out and attacked a small piece of ground near the sidewalk where my husband had poisoned some poison ivy which sort of worked but of course, not really because even a nuclear device would not completely eradicate poison ivy and I've been meaning to get out there and pull what's coming up before it becomes another murder jungle. I wore gloves but felt the entire time as if I was probably the stupidest person on earth although I know that Ellen  has been doing the same thing on her property over in Texas. Maybe we're not stupid so much as just...stubborn?
Whatever. I gave it my best shot although I know I left a ton of the stuff in the ground via roots which are long and thick and travel far. While I was working a guy from down the road who travels about in a motorized wheelchair came by and he stopped and we talked for a few minutes. We've never really done that, he and I, although we see each other all the time. He's one of the regular visitors at No Man Lord's and lives right across the street from him. He showed me a picture on his phone of the car wreck he'd been in which is the reason he's in a wheelchair. It was horrific. It didn't look like anyone could have possibly survived in that flattened mess of steel and glass.
"Good Lord!" I said. "How are you still alive?"
He told me that it was because of angels, his mother being the main one. I'm not going to say it wasn't because some sort of miracle had obviously occurred.
He's a handsome man and his face appears to be unscarred.
He's also a popular man. Every local car that passed honked at him and he waved at them all. Finally he asked if I'd seen Pinot and I said that no, I had not, and he said that he was going to go down to where he stays and see if he could find him and off he went.
When I finished up with all of the poison ivy I wanted to pull, I came in the house, threw my clothes in the washing machine and took a hot shower with Dr. Bronner's, scrubbing every bit of my body, even the parts that had been covered. We shall see what happens.
So it's been a good day and here's a picture of Magnolia June that Lily sent in a group text. 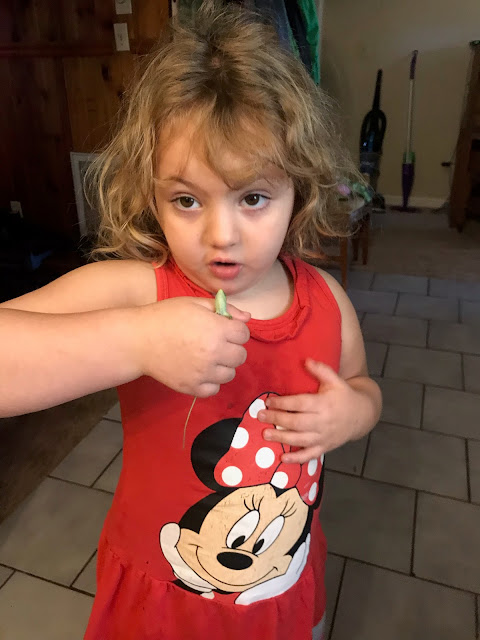 She is holding a little green anole she named "Girl" and trying to convince her mother not to make her let it go so that she can keep it as a pet.
That child.
Hank sent an attachment of the video of the song "Born Free" by Andy Williams and this message:
"Play her that. Hold her and sway. Tell her it's best for everyone and that Girl is a wild lizard who must reach her potential out in the world."
I might quite possibly have the best family in the whole damn world.
Love...Ms. Moon
Posted by Ms. Moon at 6:17 PM