Get The Fucking Truck 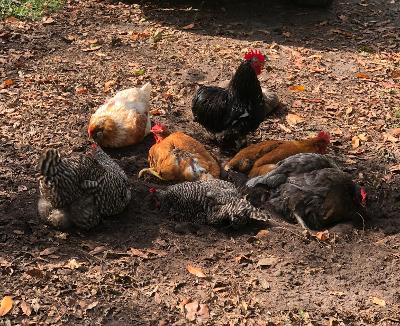 Here is a lovely little group of chickens, dust bathing and relaxing in the driveway spa area. Here's another picture. 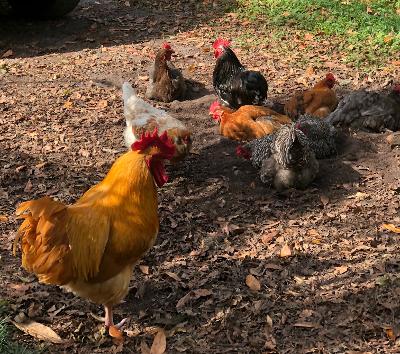 As you can see, Liberace and Fancy Pants both are standing guard. That's what roosters do. They watch over their flock. Not so much by night when they're all sleeping, but all day long they are attentive and keep track of where the ladies are. If a hen calls, Liberace runs to her, depending on what sort of call she is making. They have very specific calls and warnings. They have different warnings for threats from the sky and threats from the ground. As in hawks or dogs. A rooster will risk his life for a hen. A mother hen will gladly risk hers for a chick.
I see my little flock as a metaphor for how a community depends on each member's attention and participation and how important accurate communication is.

Liberace is an orange one but he is a far better man that the melting down, losing his shit Orange One who has made all of our lives such a true-life phantasmagoria of horror for the past four years. Given a choice between Liberace and DT, I would feel much safer with the nuclear codes in the capable talons of my rooster.

Another day of waiting, of being patient. It's okay. It's so much more okay knowing what we know about how the election count is going than it would be if it were going the other way. Still, for every reason in the book, I would give anything if the margin wasn't so razor slim in so many states. I am absolutely amazed that Georgia is looking blue and I give all the credit for that to Stacy Abrams who is a goddess, a superior human being, and someone I would love to see as the first woman president of the United States.

Jessie and the boys are here to spend the night. Jessie is a little weary after two weeks of being a single mother and she is quite looking forward to martinis. Levon has announced that he wants to sleep with me but we shall see about that. August has already pulled his fold-out bed from the closet and placed it by Boppy's side of our bed. Meanwhile, we have played the matching game, read a book, played with toys, and the lads have discovered the joys of using all the different doors in this house to run inside and out and around and around, screaming "BOO!" at their mother and me every time they pass us and then laughing hysterically. I have a meatloaf ready to go into the oven and Boppy just got back from the woods.
TV Time!

So here we are again, living our lives as life goes on within us and without us. I saw a video on a group that I belong to on FB and I am going to post it here. I could watch it all day long. However, I must warn you that if the word "fuck" in all of its glorious uses and variations offends you, please, for the love of god, do not watch it as it could be used at a training session for the proper and most affective ways to express yourself using the word as often as possible.

That is Michael Rapaport and I kneel at his fucking feet.
Happy Friday, y'all.
Love...Ms. Moon
Posted by Ms. Moon at 5:46 PM