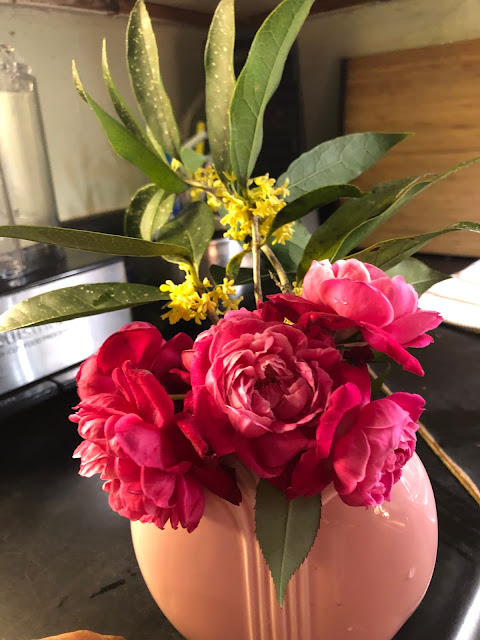 Late Roses and Tea Olive
I walked today after procrastinating for a very long time, reading interviews, older and new with Keith Richards and poor man- they always ask the same things- what was it like when you and Mick were feuding, did you really snort your dad's ashes, did you steal Anita from Brian, and mostly- why aren't you dead already?
READ THE BOOK, PEOPLE!
But now I know that he really misses going on tour which I could have guessed, that he is wearing comfortable clothes and staying masked and mostly at home, and that he and Mick are sending music back and forth because they were working on an album when Covid hit, his dogs are named "Sugar" and "Honey" AND that he doesn't have a cell phone.
Why would I? he asked.
So yeah, a walk and I'm always so amazed at how No Man Lord and his friends can spend hours sitting under a tree and just talking. They probably don't need cell phones either. We wave at each other and ask, "How ya doin'?"
Obviously I have very little to say today. I've just been at home, doing a little of this and a little of that. Cleaned the hen house, dumped the poopy hay on the compost pile, did a little weeding. Nothing special at all and yet, it's been a good day in its way. I'm feeling guilty right now because Mr. Moon is out shoveling compost on our garden after he spent an entire day shoveling compost in Lily's and Jessie's gardens and the sun has already set.
And he wonders why his shoulder hurts. He wonders why he gets so tired.
I'll say that the roses are still lovely in their late bloom, that the tea olive's scent is so strong and so intoxicating. I'll say that I'm a lucky damn woman. Those are the things I have to say and I think that's enough. My mind seems to be somewhere else right now, so I'll just wish everyone well, promise to be more be-here-now tomorrow.
Meanwhile...
Love...Ms. Moon
Posted by Ms. Moon at 6:15 PM