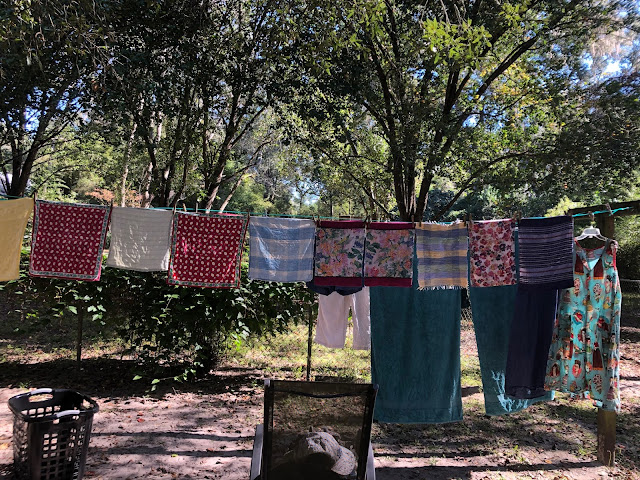 First let me apologize for not answering comments in a timely manner. I have a very strict routine about when I do certain things and answering comments is one of them and some days I just get way behind doing a project or prepping supper or whatever and that's what's been going on here lately.

It's been the most beautiful day. Laundry on the line under a blue sky and the first part of the day we still had the Weatherfords here because they decided just to stay the night last night. The boys were exhausted, Mama and Daddy were exhausted and martinis were involved. And so we feasted on delicious leftovers and the boys got a bath and used their fingers as toothbrushes and Levon, used to some sort of natural child's toothpaste declared that my toothpaste tasted better than track hoes.
"You better get that boy some Colgate," I told Jessie this morning.

We read books before bed and then August demonstrated how his daddy taught him to do a rain massage which involves many different massaging techniques, on both Bop and Mer and it was the most delightful massage I've ever had. August slept on his fold-out bed beside Boppy's side of our bed and he talked and talked and talked until finally I just said, "Okay. Love you. Night night," and turned out the light and left the room at which point he fell asleep immediately. That child is absolutely full of words and he endlessly describes inventions that he is going to make. They very often feature rockets and cars and things bigger than cars (just a few feet bigger) and chargers and super chargers and, and, and...
I can't even begin to tell you but I will tell you that when he woke up this morning and jumped immediately in the bed with us he was already talking about some other invention.
Levon slept in the pac'n'play in the room with his parents and I hear that he got up at his usual 5:30 a.m. and his daddy read books to him until August and Boppy and Jessie joined them and by the time I got up, there had been a great deal of snacking and TV watching and I don't even know what all. I told Jessie it reminded me of this wonderful scene from The Big Chill.

You have to watch it until the very end to hit the joke. God, that was a great movie.
But I got up to speed pretty quickly and before you know it, pancakes were ready and bacon and eggs and leftover biscuits and beauty berry jam and then Mr. Moon and Vergil continued with their project of getting the clutch on the tractor unstuck, which they did, and the boys got to drive the tractor, sitting on Boppy's lap and all was very well. Jessie did the boys' hair with some gel so that they looked like this. 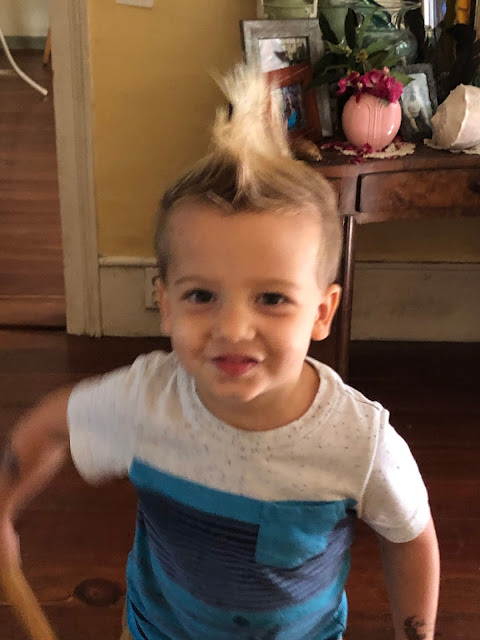 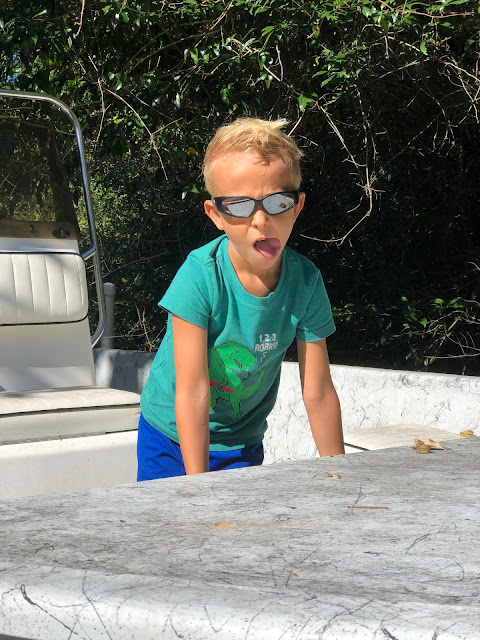 August had sort of already smashed his down but he's still cool.
It was quite a busy morning but at one point Jessie was cleaning up the toys in the Glen Den and watching an episode of "The Office" and I joined her and we watched together and both teared up at the end of it.
"If I broke my ribs again, I'd watch the whole series again," I said.
"You don't have to break your ribs to do that," she said.
"I sort of do," I said. "Or something. I'd have to break something and I'd rather not do that."
After they left Mr. Moon went to town to go do some car-related business and I stayed here and didn't do much. A little sweeping, unloading the dishwasher, getting in the laundry, weeding the newest rows in the garden.
The way the weather feels and smells and the way the light slants and shines has been bringing back all sorts of nostalgic emotions. Not exactly memories, but more just the emotions associated with this time of year, most of them good. I'm grateful for that. A sweet, slow ride of feelings.
I've got gumbo simmering and I'm afraid I've done something wrong. Somehow it tastes a little scorched as if I rushed the roux but I don't feel like I did. The problem is that I have never used just one recipe but have read a bunch of them and used them as a framework and of course every time I make it I go through the same process, meaning I never do it exactly the same.
Well. It'll be fit to eat.
Getting chilly. I do believe the duck will be on my side of the bed tonight. I just checked and it's 68 degrees in the house. Good Lord! Feels like an arctic wave to this old southern woman.
I have to tell you that last night when the kids got here, the boys were drowsy and when Jessie got Levon out of the car I was standing there and she, cradling her baby said, "Look- here's Mermer."
And that boy reached his arms out to me and I took him and he cuddled down onto my old bosom and I felt like I'd been given the sweetest gift in the world.
And I had.
Love...Ms. Moon
Posted by Ms. Moon at 6:05 PM