I Bought Bacon, Butter, And Barack

I have taken exactly zero pictures today. I've been too busy doing things that did not beg for posterity through photography if you know what I mean. It was not a stop-and-smell-the-roses-and-then-take-a-picture sort of day. It was a get-your-ass-to-town-and-get-shit-done sort of day.

I did not procrastinate as badly as I usually do on shopping days but it was still almost noon before I left the house. I stopped by Hank and Rachel's with eggs, venison, and a pair of socks they'd left over here. I got to see Rachel but Hank was asleep because, as August told me a little while ago, "Hank is nocturnal."

Yes. Yes he is. Hank stays awake and makes sure that the world is turning as it should while the rest of us slumber. When we get up and begin to function, he hands over the running of the planet to us and goes off to bed for his well-deserved sleep. It is the service he provides. I had to laugh this morning over the comments on a Hank FB post. May commented at some ungodly hour of the morning and Hank replied, "Why are you awake?" and she answered, "Because I have to be at work in two hours and I need this time because I am old." To which Hank said, "As long as it works for you. This is when I do the dishes and work on my trivia chores."
This sums up the difference in siblings quite nicely, I believe.

Anyway, after I chatted with Rachel for a few minutes I went to a local compounding pharmacy where I get my hormones. That was fine and everything was fine but I was treading on the edge of sharp anxiety all day long. I was very hungry though, and decided to order pick-up at a seafood restaurant near Costco, my next stop and so I did. I ordered a grilled fish sandwich and some cole slaw and I picked them up and ate them in a shady spot in the parking lot. The sandwich was surprisingly delicious and it gave me another reason not to rush right on in to the giant warehouse of Costcolandia.
I really wasn't feeling it today. I got the stuff I needed plus a copy of Barack Obama's new book. I'd been listening to an interview with him on Fresh Air while I was driving around and was so pleased to find the book.
My GOD! What a gracious, funny, brilliant, well-spoken man he is. Comparing him to the Orange Intestine is, well- pointless. There is no comparison. One was one of the best presidents this country has ever had and a man whom dogs and children love and whom women swoon over and men envy for his coolness and basketball abilities while the other is a poor imitation of a human male who has to pay women to sleep with him, has probably never had a pet in his life nor read a book in his life, can hardly make it down a ramp without assistance, and who makes children cry just by his very presence and who has almost single-handedly destroyed democracy.
But I digress. I can't wait to read the book although I want to finish the one I'm reading now which was written by a guy in the group of people with whom I went to Cuba, entitled Harmony and Normalization: US Cuban Musical Diplomacy. Tim Storhoff is the author's name and Lis and I both came to adore him on the trip because he was so funny and so sweet and sometimes told dirty jokes about Bach and his organ. His book is quite scholarly but his style is accessible and I'm enjoying it. I had no idea that Tim was a scholar at all when I first met him but I suspected right away that he was a lot smarter than the rest of us. He is one of those quiet smart guys that listens a lot and then suddenly comes up with something that sort of blows your mind.
He's definitely not only the smartest guy in the room, he's also truly the coolest. 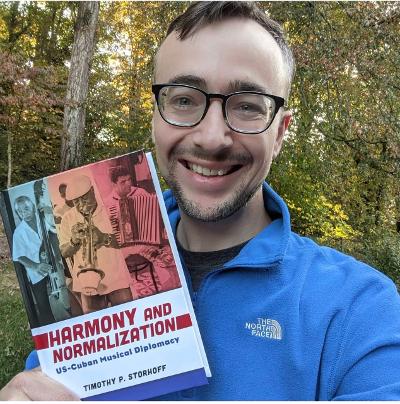 There's Tim and his book. And I must say that Obama comes off quite well in it. If not for his policies on Cuba, I would never have been able to visit that amazing country so close and yet so far away and neither would have the Rolling Stones.

Lord, I'm rambling. I'm sorry. I really am exhausted. Once again I felt as if I was in Publix for an eternity and then I came home and unloaded everything and put everything away and made chili and folded laundry and unloaded the dishwasher and I have the oven preheating now for the loaf of sourdough that's about ready to be popped in.
Speaking of ovens- I want a new one. My stove is...adequate. But there is much about it which does not make me happy. My stove is my most-used tool and I am itching for a better one. I suppose I should start doing some research.

So I guess I'm ready for Thanksgiving, whatever that means. I bought a tiny turkey because all I really care about at the Thanksgiving dinner is stuffing (not dressing), cranberry/orange/pecan relish, and green bean casserole. Yeah. Really. And now I have the ingredients for those things so whatever...

Mostly I just want us all to be safe. I saw people buying huge turkeys and carts full of beverages and pies and rolls and all of the things that one would need to feed a huge gathering of people and I wanted to slap them and say, "WHAT THE FUCK?"
How many people who attend huge Thanksgiving dinners will end up in the ICU by Christmas? How long can our health care workers keep doing what they're doing before they break? How long before our entire health care system breaks down entirely?

Like I said, I'm tired. We're all tired. Some of us can probably barely get out of bed on their days off. Let's try not to add to the problems. Cranberry sauce and pumpkin pies aren't worth risking lives for. They just aren't.