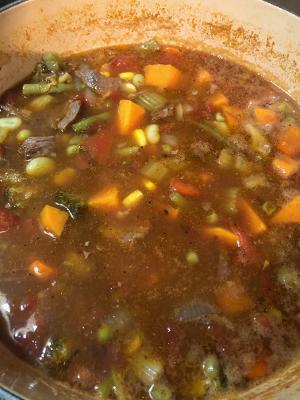 This soup is comfort food. Not as much in the eating of it, most likely, as it has been in the making of it. I started early this morning, simmering a venison roast's bones that I'd frozen with garlic and a bay leaf for hours and hours and just a while ago I cut up carrots and celery and onions and sweet potato and tomatoes and browned some venison stew meat and combined all of that with a can of tomatoes and frozen broccoli, green beans, corn, baby limas, and peas. That and leftover bread will be our supper.

My other comfort today was having August and Levon over so that Jessie could get her shopping done. And that was a joy. They really hung out with their grandfather more than with me because that is THEIR joy. And his. 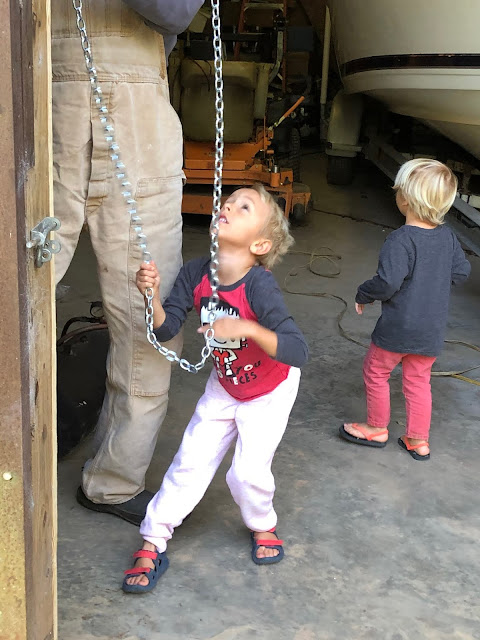 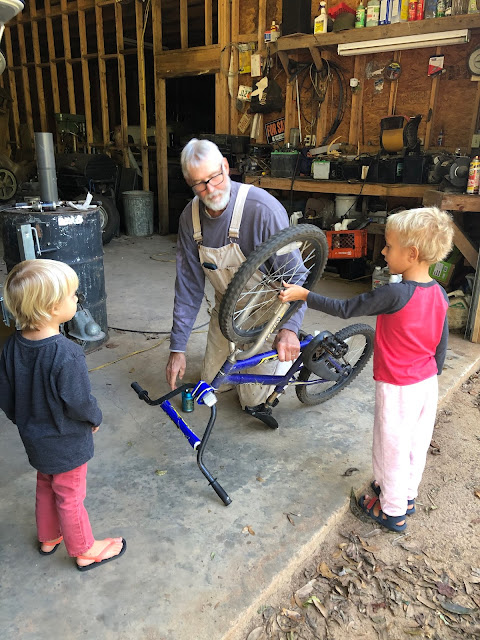 And then the boys helped him oil up a bike we have here and put air in the tires. I loved watching them, Boppy explaining what he was doing and making sure that they were getting to assist him. Unfortunately, even with the seat adjusted all the way down, August's legs are not quite long enough to reach the pedals. "I will be big enough in this many days," he said, holding his hands up with ten fingers spread. We agreed that it will be soon. No doubt. "Me too!" said Levon. And he is also correct.

They helped Boppy unload some logs somewhere while I made peanut butter sandwiches and then it was lunch time. After that we read books, the boys and I in the library. "No Hugs Til Saturday," "Duck in a Truck," "There's a Wocket in my Pocket," "The Jolly Christmas Postman." Levon slipped out of the room before we had finished that last one and we found him in the Glen Den, watching a video with Boppy on how to drive a front-end loader. August joined them. 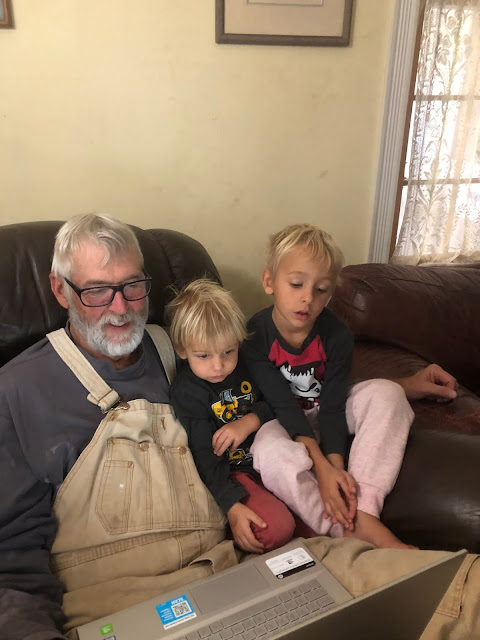 And then we moved on to necklace making with beads and elastic string. This made us happy for quite awhile. August can string his own beads but Levon likes to find the ones he wants and give them to me to add. Even though we tried to pick up all the beads that had rolled to the floor, I bet you that there are still at least twenty of the little things hiding out in the dining room as we speak.

After that, we went back outside and the boys and Bop opened up the old camper van and pretended to go camping. They are charmed by the little sink, the idea of packing food and, as Levon said, "Eating wherever we want!" and sleeping like cozy bugs in cozy rugs. 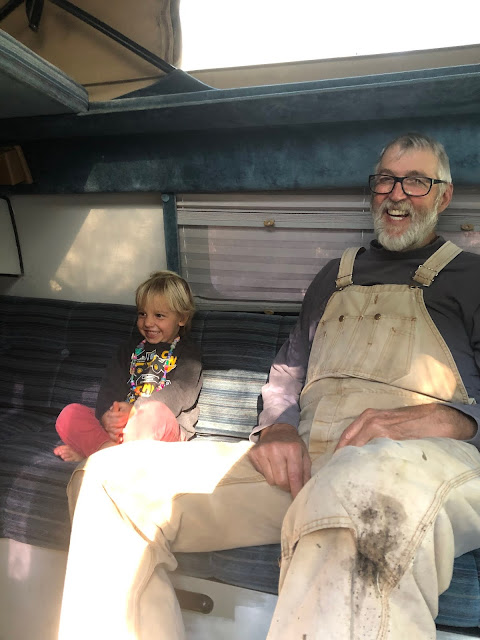 I sent that picture to Jessie and she said she wasn't sure if she'd ever seen Levon smile like that. He is a Boppy's Boy for sure.

I was in the kitchen cutting up vegetables when Jessie came to pick them up. As always, they were as happy to go home as they were to get here. They are such easy-going fellas. Far more for us than for Mama, I'm sure because that's how it goes. They don't fuss and they don't cry and best of all, they don't fight. At least not here. I have it on good authority that this is not always the case at home.

And now we wait. I guess some polling places are about to close and I am certain that Trump has an army of lawyers lined up in three piece suits, holding their brief cases and ready to dash off to wherever they need to go to try and stop votes from being counted. I feel almost sick with anxiety and dread. I dare not hope. Isn't that awful? But last time I had so MUCH hope and the way I felt when that hope was dashed upon the sharp rocks of shock is not something I feel I can live through again although honestly, there is no way to be prepared should the election turn out badly.

I am thinking of the night Obama won his first term and Hank called me in tears. "We did it!" he cried. "We did it!" and I cried too, from stunned disbelief and joy.
Oh god, how I want to feel that way again.