Distraction And Being Distraught 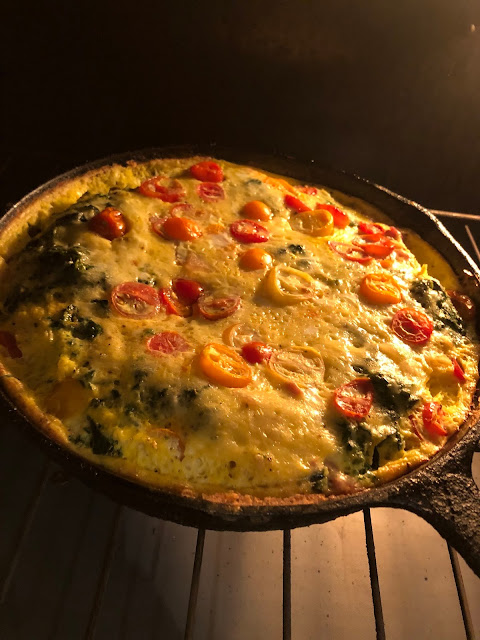 Last night's supper was such a failure that I had to make something good for our lunch today and so, inspired by Lis who had made eggs with the last of Lon's garden cherry tomatoes, I made a sort of frittata, or a tortilla, I guess, in the Spanish sense. Also, we are drowning in eggs and they are so good and so pretty with their golden yolks. For whatever reason, the eggs in this dish were incredibly light and fluffy. Perhaps because I beat them with whole milk instead of 2%. Who knows? But oh, it was delicious.

I should have known better than to make last night's bean and shrimp stew and I probably never would have if my friend on FB hadn't said she'd made it and that they loved it.
We definitely did NOT love it and I should have listened to my cook's instinct about the wisdom of combining beans and shrimp unless it's in a sort of gumbo dish. It was just...weird. Like trying to marry a dragon and King Kong. Or a mermaid and a boar hog. Or something. And perhaps it just wasn't to our taste. The chickens got what we didn't eat and they seemed to find it to their liking well enough and will turn all of that protein into more golden-yoked eggs so there was not really much waste to it. And the bread and the salad were wonderful.

Am I droning on? Yes. Yes I am. I am trying to keep my mind occupied instead of letting it run the hamster wheel of tomorrow's election and how it turns out over and over and over again.
I am so afraid.
There. I've said it. I just am.
I honestly do not think our country can survive another four years of that wad of orange detritus in the Oval Office. I do take hope and comfort in the fact that so many people have early-voted either by mail or in person. That seems auspicious. But there is so much that takes me to dark places. For one thing, I never, ever believed that he'd be elected the first time and I will never get over the devastating revelation and realization as to how so many of my fellow citizens think and what they truly believe. And the truest thing that their hero ever said was in 2016 when he declared that he could stand in the middle of 5th Avenue and shoot someone and he wouldn't lose any supporters.
Honestly? I think he'd gain some. Depending on who he shot. And what color their skin was.
And although I've been scared to death that this election is not going to be either fair or honest, I absolutely did not think that there would be Trump supporters blocking polling places or trying to stop Biden caravans on highways. I don't know WHY I never thought this would happen. Maybe because, well, you know- we live in the United States of America and we just don't do those kinds of things?
Where the hell have I BEEN for the past four years? Haven't I learned by now that there is no bottom to the depths of the despicable behavior that he or his followers are capable of?

I forgot to tell y'all that while we were at the beach all of the Biden signs in my neighborhood were stolen one night. Except, interestingly, in the yards of my Black neighbors.
This says to me that the thieves were cowardly-ass, asshole rednecks.
It also says to me that Trump supporters have no manners, no couth, no respect for others' property or political beliefs. We Biden supporters have left our neighbors' Trumps sign go unmolested for four years now. FOUR FUCKING YEARS!

And that's enough of that. I can't do any more than I've done. I can't even always control the outcome of a supper recipe, much less the election of a president. So I stayed fairly busy today. I cleaned the hen house, I worked in the garden, doing a little weeding, a little mulching. 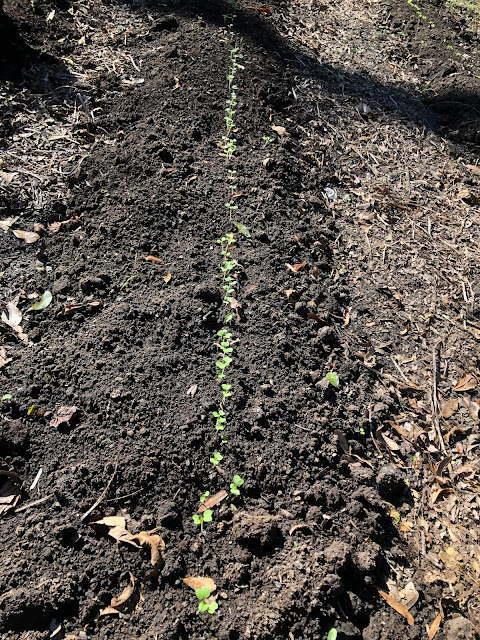 That's some lettuce, I believe. I could be wrong. The spinach and swiss chard and cilantro and bok choy and whatever the hell else I planted are also coming up and the rows we planted a few weeks ago are looking very nice. 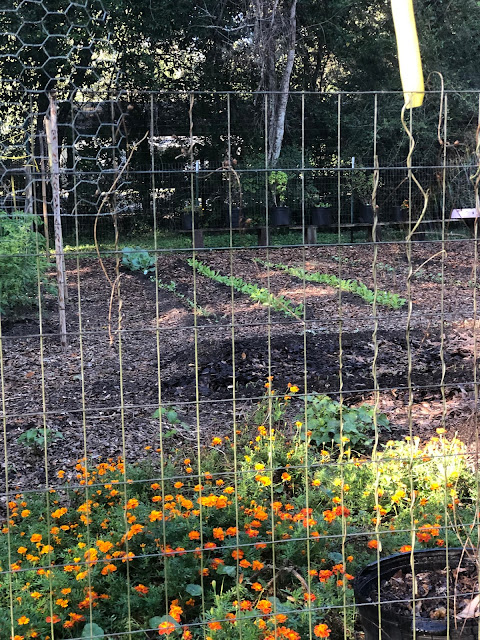 The carrots are especially cheerful. 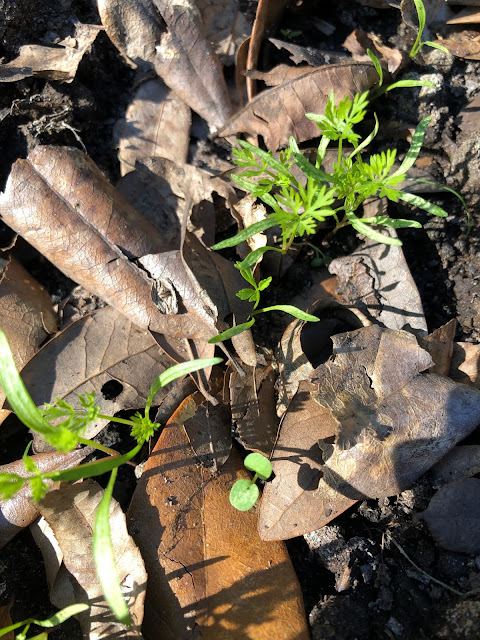 I listened to the last few hours of "A Private Cathedral" by James Lee Burke, narrated by Will Patton and that certainly kept me distracted. I would never really recommend Burke's books to most people because his tales can be quite violent, quite dark, but he is a beautiful writer and Patton's narration of the books is as perfectly suited to them as an organ is to a church hymn.

The sun has set and by this time tomorrow I'll be glued to the news as we all will. I have no doubt that we will go to bed not knowing a damn thing. I'm going to try with all of my heart to keep a spark of hope alive and burning brightly. I guess that's all we can do.

That and continue to be as kind and decent as we possibly can.