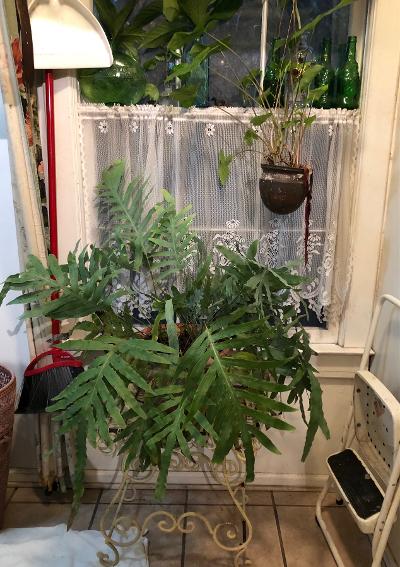 I never realize how big my plants have grown over the summer until I bring them into the house before the first freeze. Of course I don't bring them all in. Not by a long shot. Some of them are just way too monstrous for me to haul inside and I don't know what I'd do with them if I did. The room we used to use for that purpose is now the laundry room and although I actually have a few in there now as well as the rooting nursery and babies-in-pots daycare, there isn't room for nearly as many as there used to be. So I brought in what I could, what I could find room for, and covered up the rest with my stash of old tablecloths, sheets, and blankets that I keep just for that purpose.

Here are a few more of the ones I did bring in. 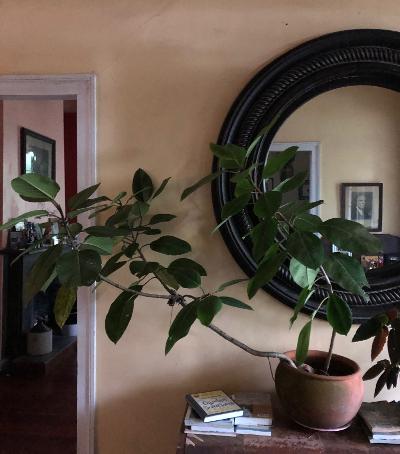 This lovely thing is a Banyan tree and I just figured that out today with my wonderful Picture This! app. Kathleen gave it to me and I've had no idea what it was and I'm pretty excited because I love Banyan trees. I've just never thought of one being in a pot before. And yes, it does need a bigger pot and that will happen after winter but I read that they do like to be potbound so I've accidentally done the right thing by it. It sort of takes up half the hallway. 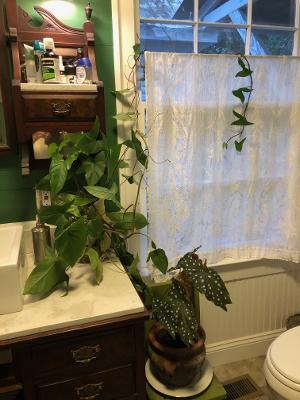 The plant up there on the left is an arrowhead plant and it's gotten all sorts of out of control. I have the polka dot begonia on a little child's chair under the window and Mr. Moon isn't going to mind that his toilet area is compromised with that set up, right?
I'll change it before he gets home. I promise! 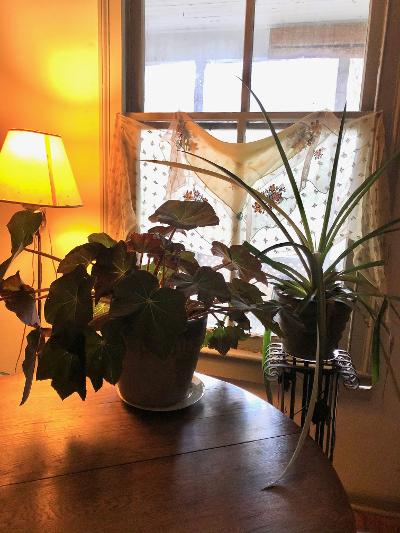 There's another begonia and a pineapple plant in the dining room. That window does not get much sun but it'll have to do for now. I've got a few plants more stuck here and there and it's rather nice, having the green company.
The first thing I did this morning before I moved plants around was to go out and cut my banana stalks off their trees. I did my research and found that what I thought was true IS true which is that those little banana fingers will get frozen and die when it gets below 32 degrees. One of the stalks was easily accessible to cut but the other one, the one I just discovered, was way too high for that so I had to cut the main part of the tree down with a sharp knife in order to harvest the fruit. That is fine because once a tree has produced fruit, it dies anyway. Now the fruit stalks are set to ripen in the old laundry room and I hope they do. 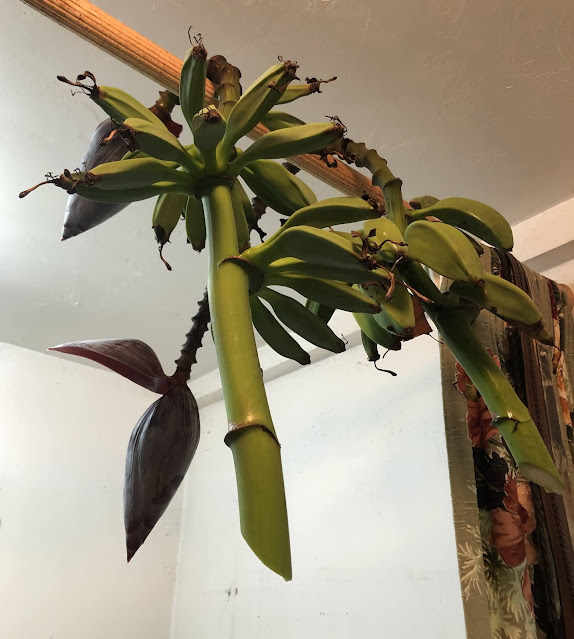 Exotic decor, right? Goes perfectly with my darling Sue-Sue's vintage bark-cloth curtain.
I also cut a bunch of fire spike today to stick in vases to root over the winter, some for Rachel and Hank and some for me to plant in the area where I pulled the poison ivy. So I have great bouquets of that all over the house too. 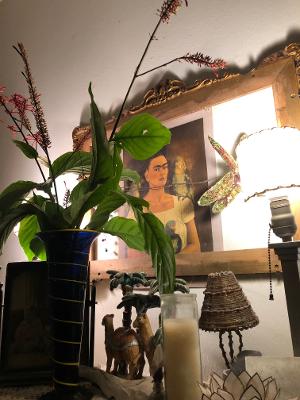 While I was at it outside I picked up some branches and twigs and hauled them to the burn pile.
Feels good to get some stuff done.
And now it's closing in on night time, already dark, chickens up in the hen house, and the temperature is dropping. I know- I KNOW! We make way too much of a big deal about it around here when the thermometer goes down past thirty-two. We can't help it.
Mr. Moon made it to Tennessee safely and has been sending me videos of SNOW! That transplanted Floridian is going to freeze his ass off in the deer stand.
He'll love it.
Last night as we were settling into our cozy bed I asked him to please kiss me good-bye before he left in the morning. He said, "You can kiss me after you make me a big breakfast," and we both laughed and laughed. I informed him that there were two packages of granola bars in his snack bag and that would have to do. I'm not best-wife enough to get up at four in the morning to make oatmeal.
But he did kiss me and I told him to be safe and that I love him and he said he'd be safe and that he loves me too. And then I turned over and went directly back to sleep although I could not sleep as late as I usually do. The house was just too quiet.
Love...Ms. Moon
Posted by Ms. Moon at 6:40 PM