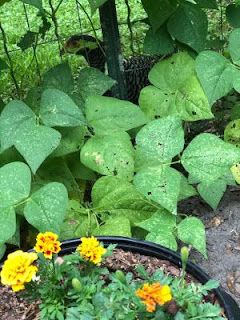 Can you see the chicken?

So here's what I learned today- sometimes you can communicate better with a mask on than off. I discovered this when I was at the check-out line at Publix. I was wearing a mask and the bag boy and the cashier were wearing masks. I had asked the cashier how she was doing and she said that she was okay and I said, "You don't sound very enthusiastic about that," and she mentioned her blood pressure and I said that if ever there was a time for blood pressures to be up, this would be it. That things just keep getting more and more stressful. She agreed. Then the bag boy chimed in saying something about the protests. Also? His mask was an American flag print. I'm not sure exactly what it was he said but it sounded like he was insinuating that the protesters were causing problems and I looked at the cashier and she looked at me and we rolled our eyes at the same time so far they might have dropped onto the floor and gotten lost under the check-out platform. Or whatever you call that thing.
Don't worry. I gave the kid a little history lesson. Combined with a little civil rights information. Everything I said the cashier responded with a, "Uh-huh," as she scanned my items.
Pricey items, I might add.
Jeez. I'm not spending money on much these days but Publix is still getting its fair share.

I know it's not much but I have taken heart today at images of police officers across the nation setting down their riot gear and taking a knee, sometimes even joining in with the protesters as they march. I heard an interview with a Flint, Michigan sheriff on NPR while I was driving home from the store and it sure as hell brought tears to my eyes. Chris Swanson is his name.
Now don't get me wrong- the police are doing terrible things all over the country, attacking peaceful protesters in some places (in front of the White House last night, for example, in order to clear the streets so that Trump could go pose with a Bible in front of a church and you can only imagine how I feel about that) and there are reports from all over about the police themselves damaging property and instigating violent behavior and of course there are the reports of absolutely innocent bystanders being shot with rubber bullets and tear gassed.
Although, honestly, the protesters are absolutely innocent too.
BUT- wouldn't it be something if police all over the country started putting down their riot gear and taking a knee or linking arms with protesters and marching in support with them?
I feel fairly certain that nothing like that ever happened during the Civil Rights marches or the Viet Nam war protests. Ever.
But come on- let's be honest. What could possibly end the violence and discord faster or more effectively than that?
Plus, it would have the added benefit of making the Goon in Chief absolutely apoplectic to the point of possible instantaneous combustion.
Well. An old hippie can dream.

None of this is anything to joke about and I'm not. Truly. I'm just pointing out that there are some situations which are being handled with compassion and empathy and the courage and intelligence to do the right thing. Not many, I'm sure. But hell- any is better than none.

Meanwhile everything seems fine in Lloyd. I took my walk, I went to the store. When I got back I stood in the yard for a few minutes just looking up at the trees and all of the greenery around me, the blue, blue sky, and I listened to the birds and the crickets and I was just so grateful to be home again. There are a few places I miss going but none of this missing is overwhelming. Mostly I am pretty happy to be right where I am.

Tonight I'm going to make us a sort of caprese salad with the first tomatoes, a little bit of arugula and kale and mozzarella. Also, more squash soup because the squash ain't gonna last forever and the soup I make with it is absolutely delicious. I've got rosemary/parm focaccia rising to go with it.
My husband may weep.

Just got this picture from Lily. 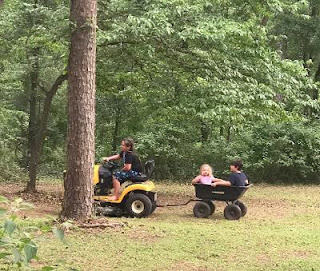 Cruising in the back yard, Owen at the helm.
My babies are growing up and I'm not there for them. With them.
I wonder what my blood pressure is these days.
I probably don't want to know.