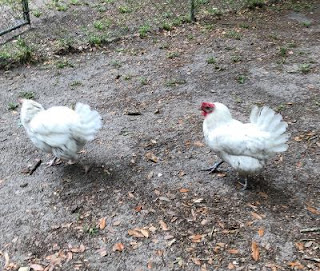 Lis called today and said, "What are you doing?"
I said, "Making leftover soup and feeling as if life has no meaning."
She laughed.
By the end of the call I may not have been completely convinced that life has meaning but I had to admit that the soup did not taste bad and that even if there is no meaning to life it can be, at times, fairly entertaining and just chock full of mysteries.

One of the mysteries I've encountered today is what you see above. Dottie and Darla, two of my older hens are acting weird. They're all puffed up- see those tail feathers? And they're making little chirruping noises. Almost as if they had chicks. Mama chicks fluff up as big as possible to make themselves look more formidable to deter threats from other chickens and predators to their babies and they make that chirruping sound constantly so that any wandering little ones know where she is if they wander too far away. I'm not sure I've ever seen this behavior before from hens who didn't have bebes but perhaps I have and simply did not notice. Could it be that they are becoming broody?
It's quite possible and after a quick check on the old internet I see that this is what could be happening indeed. And in fact, Darla is now flattened out on a nest and was when we put the chickens to roost last night and when I reached out to her she pecked me good, three times. Which is another sign for sure. BUT, she's not sitting on any eggs. I did find an egg there today when she was off the nest but I brought it in the house. If she truly is broody, she won't get off the nest long enough for me to grab the eggs there. And the other hens may start laying there as well to add to the pile. Or she'll start moving other hens' eggs to her nest.
Seriously. They do this although I have no idea how. Do they tuck them under their wings and carry them?
And what about Dottie? Will she soon be flattening herself out on a nest too?
And in a not unrelated note, I caught a glimpse of Miss Pansy whose tail feathers were also spread, ducking beneath the old dark room/now storage shed.
Are ALL of my egg-layers going to try and start families?
You can, of course, take eggs from beneath the broody hens when they start laying and collecting. I truly do not need any more chickens. I have seventeen now which is as large a flock as I need. But it seems so cruel to try and stop such a powerful process as brooding. As a female myself I understand the overwhelmingly powerful and yes, mysterious ways of hormones.
And yet...
What in the world is cuter and more darling than a tiny straggling group of chicks following a mama hen as she shows them the ways of the world? There is just something about watching a one-day old hatched chick scratching in the dirt knowing exactly what she is doing that that is cuter than anything in the world except possibly the sight of baby chicks sticking their heads out of their mother's wings when it is time to rest and roost.

Oh well. Don't count your brooders before they sit on eggs, I suppose.

Here's a hen who does not appear to be in the broody frame of mind along with her man bird. 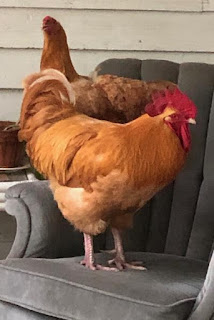 Sweet Suzy and Liberace, paying me a porch visit. I think it's so funny that they never poop on the chair although now that I've said that I'm sure I've jinxed myself and they will.

I've been thinking about names for the new chickens. I have eleven new-ish chickens now and I think that I've named seven of them. There are Fancy Pants (aka Precious The Rooster) and Tweety Bird, of course. Mr. Moon named one of the new orange birds Pinto because she has a white spotted rear end. There are two other orange chickens, one with a sort-of spotted rear end that I think I will name Pecky after one of the characters in the book I read to the boys yesterday. That seems like an excellent name for a chicken. And the mainly all orange one I think I will call Patty because it's a P-name and I like it. So that's five chickens named. And there are two barred rocks whom I cannot yet tell apart and I am calling them both Betty. This is subject to change if and when they show any individualized markings. And that's the seven. Four more to go.
If I had an ounce of sense in my brain I would not name them at all because that way, if any end up missing I won't be so emotionally invested but it's hard not to name these lovelies who occupy my world with their presence. And it helps me to keep track of them too.
Chickens are in and of themselves a big part of the mystery and entertainment of my life and as such, they do mean a lot to me. Keeping chickens somehow makes me feel like a part of the long line of women who have tended these birds all over the globe for eons. I feel a connection to every woman who has kept or does keep chickens in history. We may begin because we want eggs and some of us may want meat as well, but we can hardly help becoming attached to our flocks, be they large or be they small. So many things are changing right now that it is incredibly soothing to have this link to life on earth as it has been lived for many thousands of years.
Once again, I say- Thank you, Kathleen. I never would have started this adventure or known the pleasure of keeping chickens if you hadn't brought me those peeps and a bag of chick starter.

So. The leftover soup is simmering. It has everything from cabbage to collards to beans to rice to tomatoes to green beans in it. It tastes pretty darn good.
I picked a half bag of green beans today and hope to get the canning kettle going again tomorrow. And I may be making a tomato pie for our supper tomorrow night.

Gotta keep the mystery alive, gotta be entertained by what we have in front of us.

That's what I've got for you today.