Mr. Moon informed me this morning that I talked in my sleep last night. I only said one word and that word was "bullshit."
We are not surprised.
I have no idea what prompted me to make that declaration in my sleep. If it was a dream, I do not remember it.

These days it's sometimes hard to discern what is dream and what is not. The distinction between bullshit and non-bullshit is not so hard to determine. We all have our own definitions of bullshit, I suppose, meaning that what I might call bullshit, you might call plain old common sense. Or vice versa. I say bullshit, you say truth. I say bullshit, you say horseshit.
Whatever.
Some bullshit happened here today in my opinion. I was in the kitchen heating up some stew for lunch when someone knocked on my kitchen door. Loudly, and with purpose.
I was startled, to say the least. No one's knocked on my kitchen door a very long time. People just don't drop in on people these days. And in the country, that's even more true. Just walking or driving onto someone's property can be seen as threatening. Generally if someone does walk uninvited up to your door and knocks it is probably either someone proselytizing for their own particular brand of religion or a political candidate. Now there was that Sunday morning when three middled-aged, nicely dressed, already-tipsy women knocked on my door thinking that the person who lived across the street lived here and although that was a fun fifteen minutes (they didn't want to leave), it was a unique and one-time situation.
So today's visitor was a political candidate.
First thing she did to piss me off was to not be wearing a mask and to stand right up next to the screen door endangering both of us but she didn't seem to care about that. She announced her name and that she is running for the school board in Jefferson County because the last administration made things terrible (her words) and it's time for a change.
I got a bad vibe off her right away. Now, the public schools, (all both of them) in Jefferson County are horrible and that's just the truth. Jefferson County has a few very, very rich people (Ted Turner) and a whole lot of very, very, VERY poor people. Taxes are low because this is mostly an agricultural area. The schools have been historically underfunded and inadequate and they aren't getting any better. The Catch-22 of this is that there are plenty of people who would love to live in Jefferson County who work in Tallahassee but they simply can't because the schools are so bad. Anyone who lives here who has enough money sends their kids to the private school which is a Christian school.
I am not kidding you.
And guess who most of those kids are?
White kids.
Ding, ding, ding! You guessed it!
So, not to put too fine a point on it but guess who attends the public schools?
Black kids!
And believe it or not, somehow there has been no way to improve the schools because...
Well.
Sure. Not enough money for one thing and for another thing, they sure aren't going to raise taxes to create better educational opportunities for black kids.
Basically, I think that's the deal. Of course I could just be extremely cynical.
But every election, someone new steps up and claims that they can do something about this and in fact, the schools got so bad that the state forced them to let some charter school network take over and I'm really confused about this. Is it a private company, this academy? See, I should know this stuff because I do live here.
So anyway, it's that time again and this woman is running for office. 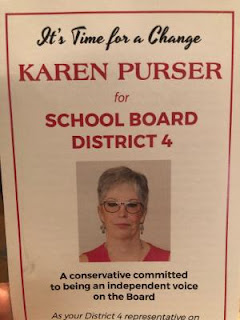 So there was Ms. Purser, first name KAREN, standing too close for comfort in my kitchen door asking not only for my vote but asking if she could put one of her big honking signs in my yard that one of her minions was toting.
I said "No" immediately to that and before I'd even looked at the flyer she'd insisted on handing me I asked her, "Are you a conservative?" which is funny because look at her description there under her picture.
"VERY!" she said.
"Yeah, no," I said and shut the door.
But hey! God wants her to run for the school board in Jefferson County.

If not her, then who?
After living here for sixteen years I can almost confidently say that it obviously doesn't matter but I won't be voting for Ms. Purser.
In fact, I do believe I shall send her an email (address is on her flyer along with information on how you can donate to her campaign) telling her about the concerns I have regarding opening my door to anyone not wearing a mask.

And that was the highlight of my day. It's rained on and off. I pulled up the squash plants at the request of my husband who is still laying flooring and I mulched the area where they'd been and planted a basil plant and some marigolds which had been in pots. Other than that I've not done much, just lived a very small life doing very small things and it occurs to me that I should not be so prissy and bitchy about someone running for a seat on the school board because at least she is trying to accomplish something although I'm not sure what that is.
I have a feeling it will not include having sex education in the curriculum.
Which of course is...BULLSHIT.
I tell you what, though- I sure hope that a god never tells me to run for political office.
I'm pretty sure that won't happen. Thank god.