And The Flowers Still Bloom 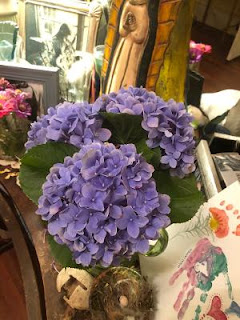 I meant to post that picture last night. Those are hydrangea blossoms that Maggie handed me when she got out of the car yesterday. Lily's hydrangeas have been blooming and blooming and BLOOMING! They are the most exquisite color, to me.

I've spent most of the day making pickles. Eleven pints in all. Seven of dills and four of an experiment involving cucumbers, onions, a sweet brine and various spices. We shall see what those taste like. Every jar has sealed. 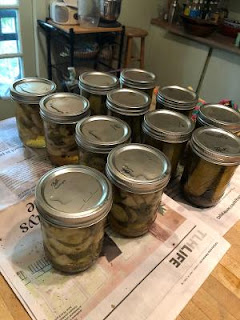 Tomorrow is Mr. Moon's birthday and I have done nothing to prepare for that nor do I have any plans. Well, I did buy the ingredients to make one of his favorite desserts. It is quite decadent with a chocolate custard layer and whipped cream with cream cheese and a pecan crust. I've talked about this before. How the recipe came out of his former mother-in-law's little self-published cookbook but I've never followed that recipe because it calls for things like Jello instant pudding and Cool Whip. To be quite honest, I have eaten and enjoyed Jello instant pudding and Cool Whip on more than one occasion but I will never make this dessert with such tacky products. Especially not for a birthday.

Everything seems so weird today. Just so, so strange.

Here we are, summer is well upon us, the heat presses down and the crickets sing that heat into being every day. There are chickens and this beautiful garden and we have electricity and running water and cars that we can jump into and drive places and the grocery stores have stocked shelves and life keeps going on and we have birthdays and we make special desserts and on the one hand it all seems so familiar, so ordinary, and then on the other hand, masks hang from our rear view mirrors and hand sanitizer is always with us and hospital ICU's are at capacity and George Floyd is dead and so are so many others and Trump reshared a video on Twitter with one of his supporters yelling, "White Power! White Power!" although I hear it's come down but Trump's original comment on the video was, "Thank you to the great people of The Villages. The Radical Left Do Nothing Democrats will Fall in the Fall. Corrupt Joe is shot! See you soon!"
The Villages, of course, is an "elite" retirement community in the great state of Florida where white people over the age of fifty-five move when they figure they've worked long enough and have the funds to support that decision. Here's a short and pleasant article about the place and its residents which mostly focuses on the amount of sexual shenanigans the white-haired, golf-cart-driving, fun-loving retirees are getting up to.
I can hardly imagine a place that sounds more like a living hell to me but I take it that there are a lot of Trump supporters living there. I wonder how much they're going to be loving him when their IRA's and stock portfolios drop like a golf ball onto the rough.
But the point of this is- we have a president who, in the middle of what might be one of the most powerful movements for the equality of black citizens ever to be seen posts a video of a an old white man shouting "White Power!"
And oh, hell. That's just the very tip of the giant steaming pile of excrement that Donald Trump has laid upon this country.
He's so desperate right now that it's absolutely ridiculous to even try and predict what he'll come up with next. Everyone knows that there is nothing more dangerous than a wild animal which feels as if it is cornered
I have no idea if Trump actually understands how badly he's failed at the job of being president of the United States. He thought and believed with all of his heart that it was a job done with smoke and mirrors and he was smug in his belief that he was the master of those.
Well.
All I want is to be able to spend time with my grandchildren in my grandmother house sitting on the love couch in the library, reading books with them snuggled up to me and having the serious sort of  conversations that one can only have with children. I want to be able to kiss my babies, to hug and hold on to them. I want to go to the river and dive in and I want to be able to sit under the trees and listen to the conversations happening all around me. I want my country to be rid of the evil poison which has flooded it.
I want us to be a country where everyone does the best they can to help stop this horrible sickness, as August called it, so that we can truly be free again instead of fighting distance and mask requirements in the name of liberty.

I want to be able to go out with my family to El Patron to celebrate my husband's birthday.

Meanwhile, we go on. I just pulled the densest loaf of sourdough bread I've ever baked out of the oven. I am so disappointed in myself. But I will say that my pizza last night had the best crust I've ever made. Or at least it was in Mr. Moon's eyes. He loves the thin and crispy crust and oh, my dears- it was.

I apologize for my rambles.