I Survive And The Pragmatic Miracle Of Birth 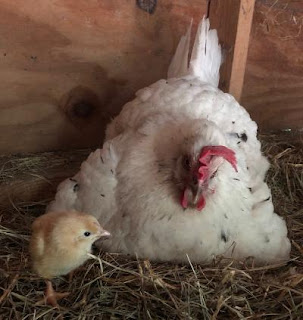 This is the sight that greeted me when I went into the hen house this morning to see if there were any eggs. One of Miss Dottie's two eggs has hatched and there's the little one looking as healthy and aware and darling as a baby peep should look. I checked under Dottie and there's still another egg and she's not getting off that nest yet. She's still in full broody-mode, tail spread and feathers fluffed and none of the other chickens would come through the hen house this morning to make their way outside which suggests that one of them may have gotten too close to the baby earlier and been soundly reprimanded by the new mother. Or something. Who knows? But when Mr. Moon opened the door to the coop letting them out directly without having to go through the hen house, they trouped out as usual so something happened. Darla is still sitting on her one egg but I know that she's only been on it for a few days because I threw the one that had spoiled out. I honestly did not think that any chicks would hatch because of the way the mothers have switched nests and how hot it's been but I admit freely that there is a great deal that I do not know about chickens.
Plus- life will find a way, won't it?

So. Annual doctor's appointment. Do you know that in the four years or so I've been seeing the sweet Dr. Zorn that I have not ONCE been to see him for a complaint? No illness, no infections, no anything whatsoever except for my exams.
That has nothing to do with anything but it probably is indicative of the fact that I am a fairly healthy woman who doesn't get sick very often.
But this morning I worked myself up into a right tizzy before I left to go into town. I just can't help it. I did some stern self-talking, I did a lot of deep breathing.
I caved and took half an Ativan.
I showered and washed my hair which is just about down to my waist now which is what hair WILL do if one doesn't cut it for several years. I combed it out and braided it back and put on my favorite blue dress and some blue earrings and drove to town in the growing heat.
I was the only person in the waiting room for awhile. Masks were required. I love the receptionist. She calls everyone "Sweetie." Remember when I hated that? Now I live for her endearments. Another lady came in and signed in. She, too, was called Sweetie.
She brought bags of snacks for the staff.
I am not kidding you. BAGS OF SNACKS FOR THE STAFF!
This is how beloved Dr. Zorn and his folks are.
I wished I'd brought snacks for the staff too. Dang it.
When I was called back a very young woman took my vitals. She told me she was a student nurse and she did a great job. My blood pressure was of course, high. But lower than it usually is when I get it taken in the doctor's office.
And then I waited, reading my New Yorker magazine until Dr. Z. knocked on the door and came in and he looked quite dashing in his black mask. We elbow-bumped. He's a talker and a toucher. Not a toucher in a creepy way. A toucher in a reassuring way. A toucher in a I-recognize-your-humanity way.
I asked him about his new baby. When I was there a year ago his wife was pregnant with their second child. This new one was born on New Year's Eve. Another son. He showed me pictures. I showed him the picture of MY new baby- the one above.
In exam news, my blood work was mostly quite fine. All of the major organs that blood work shows the functions of are terrific.
Phew.
He did his magic trick again of getting me up on the table and doing a short exam (I was still in my dress) before I knew he I was out of my chair. How does he DO that?
He asked me some questions and we talked about chickens some. He has chickens too, and he loves them. "They're very intelligent animals," he told me quite seriously. He had a whole long story about trying to get a specific breed of hens (he lives in town and can't keep roosters) which required a trip both to the Woodville Ace Hardware and the Monticello Tractor Supply and how he ended up with only three of the breed he wanted despite being assured that they were the ones he wanted and of those, only one was a hen.
"Do you want any roosters?" he asked me.
"No thank-you," I said.
We talked a little about the coronavirus but not much. I told him that I haven't been able to hug or kiss my grandkids since March 17 and he said, "Well, I always say you have to balance risk versus quality of life," so there is that to ponder...
And he told me that I am in excellent health and he'll see me next year.
He also gave me a new patient stack of forms for Lily to fill out because she wants to become one of his patients. She suffers from the same medical-anxiety that I do and knows several of his patients who all love him.

On my way home I stopped at Costco for a few things and then, at the request of my husband, went through a car wash so the outside of my car looks pretty good while the inside of it smells like Panacea at low tide due to a small bait bucket leakage incident yesterday.
Oh well.

Then I dropped off the new patient packet to Lily and came on home and did a few chores and then laid down to take a little nap but ended up sleeping for an hour. Nothing like the sudden release of sheer panic to wear a girl out. I'm cooking some of the beautiful field peas that Mr. Moon shelled the other day. It's going to be the simplest supper. The peas, some cornbread, sliced tomatoes and cucumbers. That's summer. Right there.

Because I'm a human I'm worried about the new chick not eating or drinking since she's up in the nest with her mama. I mean, chickens don't lactate. I cooked a scrambled egg and mixed it with yogurt and put it in front of Dottie and the baby who showed no interest in it but her mother ate it up like a beast. I have to trust that Dottie knows what to do.

Can we chat tomorrow?
I hope so.