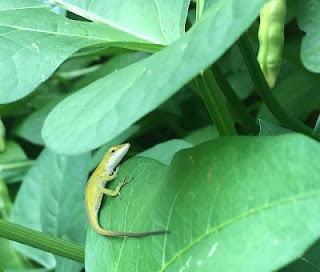 How I love that picture. I took it while I was out picking field peas. You can't really tell but that little anole is tiny. See the bean hanging there at the top right? Such a darling little lizard.

The wind is kicking up, stirring the rest of that Saharan dust about, I guess. Wasn't quite as hazy today as it was yesterday although Mr. Moon said that when he drove into Tallahassee this morning the town was almost browned out.
I think we might be about to get some rain and that would be terrific. It's thundering as it has been every afternoon and the sky is getting darker and like I said- the wind is picking up, swishing the leaves about and making thin branches dance.

It's been so hot. Almost unbearable. Lily and the kids came over for a little afternoon visit and we all sat in the back yard in the shade after we'd sprayed ourselves and still the mosquitos swarmed us but as Mr. Moon said, they sort of just bumped into our skin and didn't actually poke their little proboscises into us for the most part. Just their presence sets me on edge though, seeing and hearing them buzz about my face.
Magnolia had to go get eggs when she first got here and she found two. I had seen one earlier when I checked but knowing she was coming over I left it for her to find. It thrills her so. Mr. Moon got home just about the same time they got here which was lovely. He said of his job at the duplex- I have done all I'm big enough to do. And sometimes more.
His daddy used to say that. And he was a big man too. Or, tall, to be more exact.

Magnolia brought her Baby Alive which is now set in Espanol mode, as Owen pointed out. She wanted the little wicker baby carriage so I came in the house and got it for her and also a jug of apple juice and cups for the kids. And of course a new jar of pickled beans. We sat and chatted for awhile. Owen had wanted his hair cut so his mama did that for him. It's still quite stylish. Lily said that it hurt her heart to cut it but they were both tired of having to brush it out and braid it. 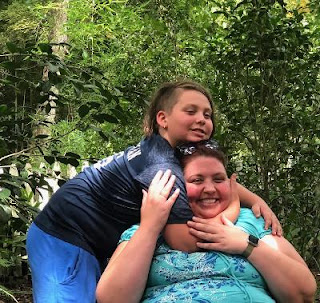 I got Maggie to pose for me although she wasn't happy about it. 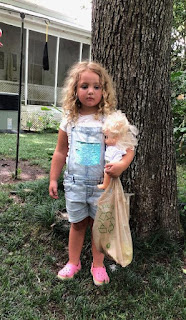 She was so hot. She'd mostly been playing some pretend thing in her mind, wandering about the yard and holding her dolly. Lily tried to convince her to smile and this is what that looked like. 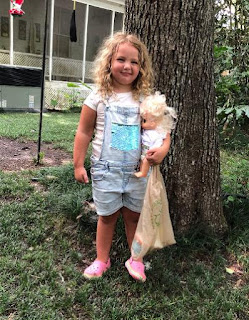 She's simply beautiful no matter what the expression on her face.

I didn't get a picture of Gibson until they were back in the car. 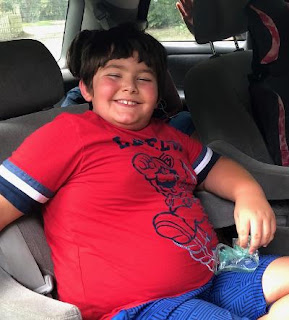 He was most happy to be out of the yard and into an air-conditioned environment. Between the bugs which adore him and the heat, he is not an outside guy in summer. But he's a sweetie and I love him so.

So of course all of that was the highpoint of my day although I did have a good time, snapping green beans to put in ziplock bags. I got four quarts of those put into the freezer out in the garage. Such an easy task. While I snapped I watched the last episode of the latest season of "After Life" on Netflix. I know that a lot of people don't like Ricky Gervais but I do. And he seems to use many of the same actors on his shows which I admire. Loyalty. One of the characters on "After Life" is played by the same woman who plays Isobel Crawley in "Downton Abbey" which Mr. Moon and I have become slightly sucked into. She's a fine actress.

I am sad to report that yesterday I thew out the remains of what Dottie was sitting on. I couldn't even bear to look at it too closely but it appeared to be something like a chick embryo but definitely not alive. She had gotten off the nest to go eat and I threw it away. It did not smell good.
Today I cleaned out the nests and put down fresh straw and moved both she and Darla into clean nest boxes. Dottie has a new egg and I slipped it back under her while Darla seems to be sitting on the same two eggs which I also put back into her care.
I would think it's just really too hot to hatch chicks in such an enclosed space but the two sisters seem undeterred. You have to give them credit for persistence if not for common sense.
Well. They can't help it. It's all hormones, I'm sure. And I can relate to that.

It rained about fifty drops and then stopped. It still sounds and feels and looks and smells like it's going to rain but I think it's passing south of us again.

Hank and Rachel are and have been in the process of moving all day which is one of the most miserable things one can do. But as May pointed out- the nesting afterwards is so wonderful. I know they'll be ecstatic to lay their heads down in their new place tonight.

And that's all the news from my microscopic piece of the world today. I'm off to make pizza now. I tried a different crust recipe and I don't know why. It doesn't seem nearly as lovely as the usual one I make. But one does try to attempt new things.