I Can Talk The Talk But Can I Walk The Walk? 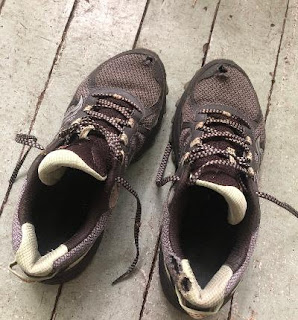 I have got to order new walking shoes. Those are hard used and shit beat. I tied 'em on this morning and took off down the road again. I wonder how many miles I've walked in them. I've gone online to look for new ones. I always wear Saucony shoes. I have been since about 1980. They fit my feet. But try going online to order a pair of walking shoes or running shoes even if you know what brand you want. There are hundreds of styles and it's next to impossible to judge a shoe unless you try it on, walk around and bounce on your toes a little.
Oh, the pain!
Oh, the difficulty!

Oh, the entitlement I so obviously have, complaining about buying a pair of shoes online.

Still no protesting in Lloyd. People just living their lives, going about their business. The other day I saw a truck and a cop car down at the abandoned store that Mr. Lawrence used to own. The owner of the truck was a black man, the cop was white. I thought, "Oh shit."
I put my eyes to the situation and realized they were just talking about something. Ten minutes later when I came back by they were still talking. Laughing. Easy with each other.
My better self says that if I saw some sort of racially motivated confrontation involving a white cop and a black person I would stop and witness at the very least.
My other self says that I'm scared to death of cops myself. I always have been. I don't know why. I drive the speed limit because I have this irrational fear that if I get pulled over they'll find half a kilo of weed and a few pounds of coke in my dashboard that I didn't know were there.
And truthfully, every encounter with a police officer I've ever had has been polite. Even the time the cop hit my car and he had to call another cop to come and give him a ticket.
It's authority I think I have a problem with. I joke with my kids and grandkids that they are the boss of me. I think I've always felt like everyone's the boss of me.
I have no idea why that is.

And now look- see? I've made this conversation all about me. Poor little old white woman, afraid of confrontation, authority, and cops.
So would I stand up and be witness if I saw something sketchy going on with a police officer? A highway patrol dude?
I hope we never have to find out.
I have and will stand up to your regular every-day racist but put a badge and a uniform and a gun belt on one and it might be a different story.

I watched some footage from a peaceful protest in Tallahassee. It was organized. Folks stood in the middle of a lane of Apalachee Parkway which is the road leading up to our penis and balls shaped capitol. (Google it.) They were led in chants.
"I can't breathe."
"Get your knee off my neck."
"I can't breathe."

Some of the folks were black. Some were white. Most were on the young side but you know- when you're my age, a lot of people seem to be on the young side.
I love young people. I love their pure intentions, the way they can laser-look at a situation and still see black and white whereas at my age, our old eyes see things more blurred into grays although not everything.
Not everything.
Trust me.
And I swear to you, I will NEVER be one of those old people who says, "Young people today..." and then follow up with some bullshit about how kids are inferior to my generation because...(list of a bunch of bullshit things that aren't even true, much less applicable).
That crap got thrown at my generation so hard. Hippies were scumbags, had it too easy, didn't know what it meant to work, didn't want to work, had horrible music that wasn't even real music, weren't real Americans because they didn't want to go fight a war somewhere in southeast Asia for no apparent reason and kill someone the government proclaimed to be an enemy for no apparent reason or at least not one that made sense.
I remember that.
I will not do that.

Every generation has its own battles to fight, its own wars to win, its own difficulties and heartbreaks and heartthrobs and hairstyles and rituals. Bless them. Bless us.

And right now we're in a battle. Could be a war. Could be a revolution.
And last night the fighters in the battle did something we never did- they made the president hide in a bunker and they shut the lights off in the White House.
Of course, even Richard Nixon had more spine than Donald Trump does.

I remember a part in Becoming, Michelle Obama's book, when she described going out of the White House at night just to see the crowds and the rainbow lights after marriage equality had been passed. The Secret Service threw a fit.
Remember this? 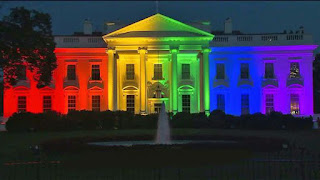 And this is what it looked like last night. 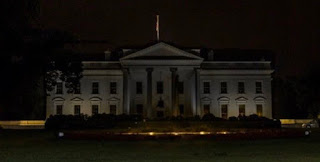 I don't think I need to say one thing more.

Said the old white lady who's afraid of authority.