Home Of The (Not Very) Brave 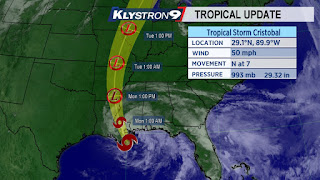 Tropical Storm Cristobal is about to land in Louisiana but we've been getting its rain since last night. Rained all night long and has continued all day. The new rain gauge, aka new garden cart, shows many inches. 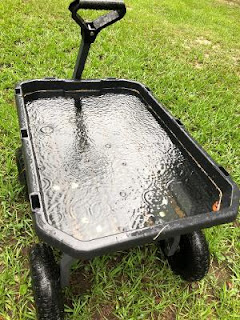 Time to empty the rain gauge!

It was not hard to convince Mr. Moon to stay home today. In fact, I'm not sure he planned to go in anyway. But between a breakfast of bacon, eggs, biscuits and sliced tomatoes, plus a little romance, he was happy and content to stay home and rest although now he's out cleaning the chest freezer in the garage which isn't exactly restful but which sorely needed doing.

I've done nothing today except cook that breakfast and laze around. Oh, I did go out during a break in the rain and pick some more beans and tomatoes. And other stuff. 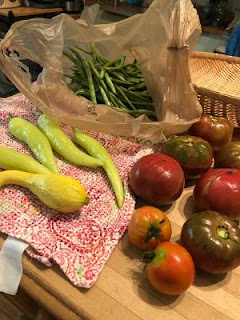 Some of the tomatoes are busting their skins because of all the rain.
We cannot possibly eat all of them by ourselves and I suppose tomorrow I should go get some more canning jars and ingredients for salsa or ketchup or something as I mentioned making yesterday. I brought up the idea of making me a pantry to Mr. Moon last night and he agreed that it would be a good idea.
"I'm just like a Mormon housewife!" I announced, showing him the green beans I'd pickled.
Then I amended my statement saying, "Actually I'm not. At all."
He laughed.
We opened up one of the jars of the sweet pickled green beans and they are delicious. Too bad I didn't really use a recipe that I can go back and use again to replicate their success. I mean, I know what's in them but as to measurements? Well. No idea.
This is a drawback to cooking on the fly.

So I see that the police are trying to prove that they do not overuse force by overusing force at the protests.
This is no joke. It's unconstitutional and besides that, it's making things so much worse. I know I've said this before but it bears repeating. Don't they realize this? Is this their last gasp (they can't breathe?) of their belief in their ultimate power? I don't pretend to have any answers but I'm not going to pretend that I'm not afraid for my country, either. And for protesters and journalists and medics and casual passers-by and anyone else caught in their vicinity.
The good news is that prominent Republicans from George Will to Colin Powell are coming out in support of Biden against Trump.
Jesus. What took them so long?
But with each domino that falls, more will go with them. Will this even matter though to Trump's base which has proven itself over and over and over again to indeed be a basket of deplorables? A fucking BIG basket of deplorables.

Mr. Moon and I started watching Jeffrey Epstein: Filthy Rich on Netflix. We made a huge batch of popcorn in the old Whirley Pop and sat down and probably got through the first forty-five minutes until we both decided we had things to attend to and the thing that's already so blatantly obvious is that a whole lot of people knew exactly what was going on there which was the serial abuse of underage girls. Children. From his rich and famous cohorts to his employees, no one could not know. Graydon Carter, former editor of Vanity Fair and a man for whom I used to have a lot of respect, has fallen to the depths of my regard because he killed a part of a story on Epstein way back when the reporter had found two women who were brave enough to speak about their abuse at his hands. Not unlike how CBS killed Rowen Farrow's story on Harvey Weinstein. And oh, by the way, Weinstein and Epstein appear to have been pals, just like Epstein and Trump who were not only party buddies but neighbors who lived less than a mile apart.
Some neighbors did report to the police that they were witnessing a lot of girls coming and going from Epstein's Palm Beach mansion which the police followed up on by interviewing a few women arriving or leaving the house and they were all over eighteen.
Supposedly.
It wasn't until the stepmother of a victim called the police that the whole wormy ball of evil started to unravel and even then he was basically slapped on the wrist and we all know that story.
So what I'm saying here, and again- this is nothing we don't all know- people who witness evil or criminal behavior and who do not report it are completely complicit in the behavior whether the evil doer is a president or a pedophile or racist police officers. Of course it's hard as hell for anyone to step forward if the offender is rich and famous. Hell, it's hard if it's a neighbor or a family member and I can understand not wanting to risk a career, an income, peace within a family, a marriage, status, reputation.
Or in some cases, possibly even death.
And when you're dealing with someone with so much wealth and power that the world can barely imagine it, it's got to be almost impossible.
I do understand that.
And of course the victims of many crimes are blamed themselves if they come forward. Especially the victims of sexual abuse or assault.
Even if they are children.
But what in hell have Republicans had to risk? Their seats in Congress? Their political standing with their bases? Yeah. Maybe.
But in not stepping forward they have risked the destruction of our very democracy and they will not be viewed well by history.

That's enough of that. Just a few things I've thought about on this otherwise incredibly pleasant day. I just went out to pick a few greens to go into our tomato salad tonight and found this little tableau when I came back into the kitchen. 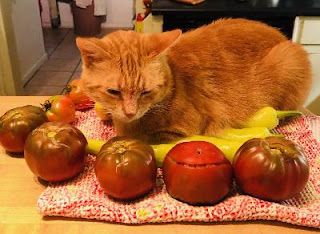 It's like she knows vegetables are good for her but she doesn't understand that you have to actually eat them in order for their nutritional value to be of use.
Nah. She just thought the towel would be a good place to nap. I am impressed with her care and delicacy in settling herself. Not one squash or tomato or pepper was knocked off the counter.

Rain continues to fall. It is cool and for this while, at least, the rivers will flow more sweetly, the ponds will fill more fully, the greens will become even greener, and the dirt's thirst will have been slaked.