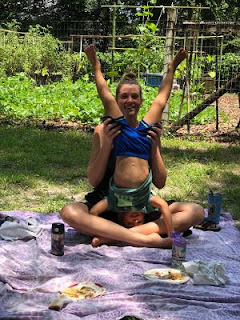 I had visitors today and it was joyful despite the fact that we were mostly good and stayed outside where mosquitoes wanted nothing more than to drain us dry of our salty, scarlet essence. We all sprayed with Full Jungle Strength Bring On The Deet bug spray and then we were relatively unmolested.
I felt like a real grandmother today because August wanted me to tell him things. First he asked me to tell him and show him something that he didn't already know about.
It took a minute and it probably wasn't anything he didn't already know about but I showed him Miss Dottie sitting on her eggs and demonstrated how she pecked me if I tried to reach under her. Then we saw a very large, messy chicken poop and even Jessie was amazed at that and I explained that when a hen goes broody and is sitting on eggs, her poop looks like that because she only poops once a day.
So there you go- I helped educate not only my grandson but my daughter.
They knew more about poop when they left than they did when they got here.
While we were eating lunch, I told August some stories about Roseland. I told him how when I was a child, children were allowed to just run everywhere by themselves and how one time a whole pack of us feral children found some buckets of tar in the woods and we made a huge mess and we all got tar on us and we WERE SO IN TROUBLE!
He liked that story so I told him about the day we found the giant swimming pool when we went through the rusted iron gates by the river and how it had had four lions, one at each corner, and how it felt like magic. And then I told him how I found that place again when I was grown up and it is now all fixed up and beautiful and Boppy and I go there to visit and we swim in that pool and the iron gates are still there. I showed him pictures of the lions spitting in the corners.
And I told him about Chester, Roseland's hermit, and how when I first saw him driving down the street on a tractor with his long, long hair and beard and with children and dogs following him I thought he was Jesus Christ come back to earth.
This excited Levon because, well- you know. A tractor. He proceeded to tell a very long story about seeing different large equipment in his street and every time I thought he was done he would say, "And also..."
Jessie told me that he does this all the time which frustrates August to no end when HE is trying to tell his mother something.
It was all so fun. 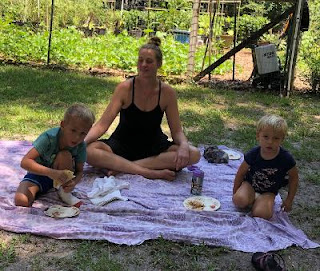 After lunch was over and Jessie and I were just chatting, I talked about my childhood some more. How it had been so very magical in some ways and so horrible in others. How I had gotten to live a life on a river and in the woods and was lucky enough to discover the ancient ruins of a lion pool, how I'd been taken more than once to a dredge island in the Indian River where mastodon fossils had literally littered the surface, right there for the picking up, but at the same time how horrible some of it had been. How I had learned what poverty really was in my school and among kids I knew. How there had been bullying and also how common and accepted corporal punishment was. How I'd seen a little boy who'd been run over by a delivery truck in my school yard. We didn't even need to discuss being abused by a stepfather or the horrible reality of living with a mother who suffered from suicidal depression.

This is life, I guess. There is balance sometimes, if we are lucky. There is no way I could still love Roseland as much as I do now if the wildness and magic (I'm sorry to keep using that word but it's the only one that fits) hadn't buoyed me above the horrors at least some of the time.

I surely know that my grandkids will never have to suffer the sorrows and difficulties that I knew back then and I am so grateful for that but they will also never know what it was like to be a kid who could play pretend Tarzan in her daily life, to eat wild mangoes off of trees, to walk unnoticed and free down sand roads with other kids, to know a man like Chester.

But. There are tractors right here in Lloyd to play on and pretend. 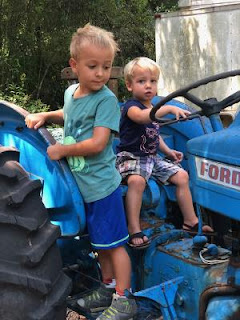 There are lots of people who love them. And there is wildness too. There is certainly a sense of safety and security that I never knew.

Before Jessie got here I picked tomatoes. 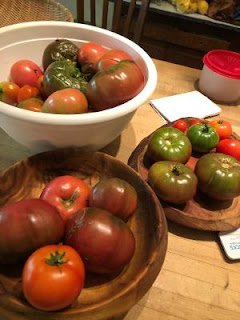 That's what my kitchen island looks like.
When she was here we picked beans but not all of them. I sent her home with those beans and some pickled ones, too. And some tomatoes.
After they left I went out and picked the rest of the beans and a few more tomatoes and two cucumbers which are already peeled and sliced and in a bowl with sweet soy sauce and rice wine vinegar to go with our tuna steaks tonight. I made a lemon cheesecake pie with no recipe so it might suck but there are berries cut up and sugared, ready to go on top of it.
I hung so much laundry that I had to double hang some napkins and pillow cases but it's all taken down, folded up and put away and the bed has clean sheets.

A good day. Levon got naked, August got stories, we all got some of each other. I kissed their toes before they left and Jessie reports that they both took a nap when they got home so all is well.
My husband is home, we are sipping martinis. It's Friday night.