Pickled Beans In Mason Jars And So Forth 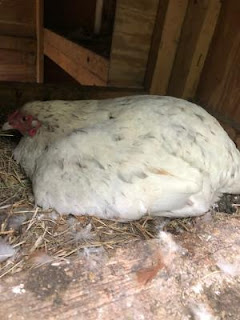 I went to clean the hen house nests this morning to find that Darla has joined her sister in nest-sitting. She, too, is hunkered down and as undisturbed by my scraping and cleaning as Dottie. They lay like living statues. I wonder what on earth they think about or if they think at all? Are they in a dream-like state, a drugged-like state, a coma-like state?
I don't know but I do know that if you reach to check under them to see how many eggs there are, they will peck you hard and fast.
I think at this point there may be one under Dottie, two under Darla. But I am not sure. I do not care enough to have blood drawn.

It's been raining since early afternoon, slow but steady. There is a tropical storm named Cristobal which has come up through Mexico and is heading towards Texas, supposedly. 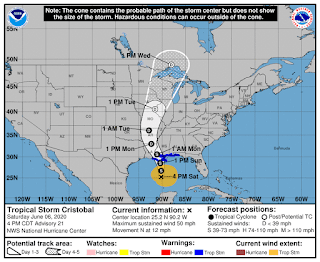 It looks like we won't get much of it, perhaps just more rain and this is the best outcome one can hope for from a storm in the Gulf for us. I keep thinking of what we would do if a major storm headed our way. The pandemic makes the thought of evacuation even more daunting and dreadful than usual but this is yet one more example of something I have no control over at all.
We'll be okay.

I spent all afternoon making more pickled green beans. I have no idea if they'll turn out to be any good at all. I did one batch of eight pints with a slightly sweet brine. Unless they are absolutely horrible they'll at least go nicely in Bloody Marys. I hope they are decent because if they aren't, that was a lot of wasted work. I have never made a pickle which was more time-consuming than these beans. 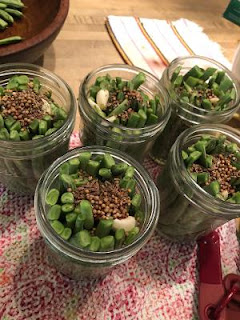 The beans must be picked, of course, and then washed and trimmed to the correct length to fit into the jars. I marked that length on my cutting board with two dots of Sharpie. I hope that doesn't kill us. I seriously doubt it will. The jars must be sterilized as always. Jar lids and the bands too. Then comes packing the jars which is truly the fussy part. Because beans are not completely straight but have a bit of a curve to them, it is not easy to get them in the jars without leaving spaces where the curves occur and each jar takes me at least ten minutes to pack. Then each jar receives garlic and the spices. By the end of the day I was using my palm to measure the spices so each jar will be somewhat different. A brine must be made and boiled. Vinegar, water, salt, and if sweetness is desired, sugar. After the beans and garlic and spices are put into the jar, the brine is added. Then the jars are sealed with the sterilized lids and bands and then placed into the canning kettle for their boiling water bath.
After the time is up on that, they are removed and I set them on a piece of newspaper and wait to see if the lids are sucked in which, as I have said, means that they are indeed safely and securely sealed. The bands can (and some say should) be removed at this point but I rarely do. They just look too naked without their bands to me. And then, if one is smart, one will write (with that Sharpie) on the lids as to what is within and when it was put up.
I am waiting for my last batch of seven pints to seal. The first batch of five have all successfully achieved their purpose. 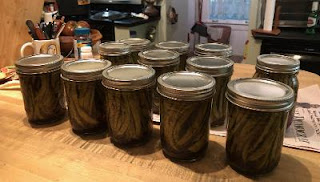 I think I have made all of the pickled green beans I need to make for one year but the vines do not show any signs of slowing down their offerings. I need to freeze beans, I suppose. I am beginning to think I may have enough tomatoes to have to think about doing something with (salsa? ketchup?) and of course the cucumbers are really just starting to bloom. The field peas are blooming and probably making little bean babies but I haven't checked closely enough. The plants themselves look amazingly healthy and strong. That will mean shelling and perhaps freezing if there are too many just for use. Before this summer is done, Mr. Moon may need to make me a sort of pantry in the old laundry room to store all of the bounty of his garden.

Suddenly, blogger won't let me align to the left side anymore. What can I say? There are far bigger problems in the world. Let's pretend I'm writing a poem.
Haha!

So that's what I've been doing today. I'm listening to a book which is quite enjoyable. It's a Pakistani take on Pride and Prejudice and it's very clever and well-written. 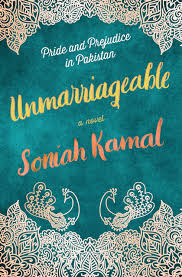 The author has done a great job of translating the classic Jane Austin novel into a different culture and time. Some things never change, and so forth...
Especially mothers.

This format is driving me crazy. I better go finish supper even though my husband is not home yet. He's been laying flooring all day and knowing him, he's not going to quit until his self-proclaimed goal for the day has been met. I am going to try and make him stay home tomorrow. He needs the rest whether he thinks so or not. Luckily for me, because I am exhausted after a hard day of standing in one place and doing things with green beans, I started a venison roast with vegetables in the slow cooker this morning so all I need to do is cook some squash and heat up some bread.

I have nothing to say about the world outside my tiny universe this evening. I am letting it go on without me which it will do no matter what I think.
Or say.