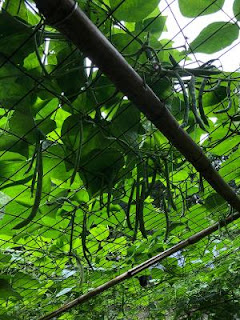 Today was a day so good for my heart. Didn't get a thing done.
Don't care.
All the grandchildren came over; Lily and Jessie, too. It was a fun fest. And no, we didn't make the kids all stay six feet apart and I have to tell you that when Lily and her children were leaving, Maggie confessed to her that she had touched Levon which we already knew but we thanked her for telling us the truth. 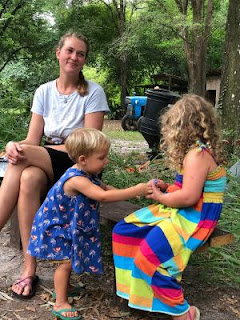 Levon loves that fox dress. I need to make him another like it.
Maggie's outfit today was spectacular. She posed for me. She'd even put on make-up because she had a bow on. 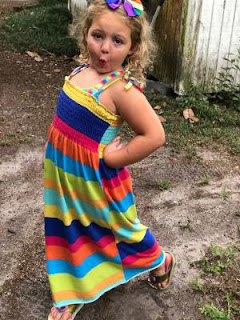 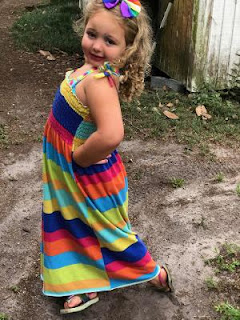 One cannot create a child like this. One can only stand back in wonder.
Don't let that girly-girl exterior fool you, though. She will pick up bugs and worms like nobody's business. 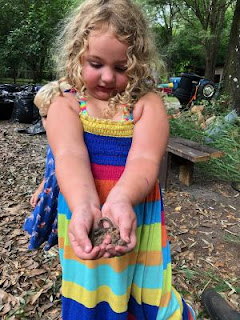 Lily says she brings her bugs and asks, "Mommy, does this bug sting or not?"

We asked the children if they'd like to pick green beans and they all said they would so we did that. Another plastic shopping bag full was harvested. I opened a jar of my pickled beans and that got eaten in a big hurry. Many thumbs up.

The kids all dug for treasure and then Mr. Moon got out his metal detector. 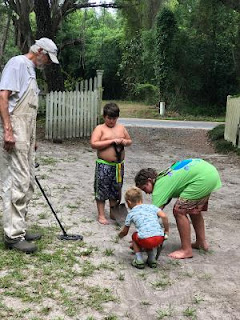 There was shoveling and troweling galore. August found two huge old nails in the driveway that Mr. Moon paid him a quarter apiece for because they posed a threat to the integrity of our tires.

Owen and August pretend-drove the tractor. 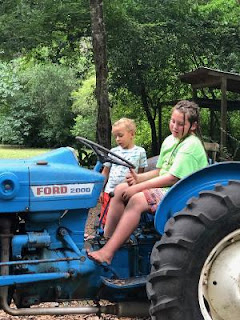 Maggie and Levon played together. They're becoming good little buddies. Maggie loves babies as much as she loves worms. They pulled each other around in various wagons and kept up a good running conversation.
I made sandwiches and we ate those and sliced apples. All in all, it was a wonderful visit. Lily took her kids to the Wacissa to see what was going on there but she reported that there were too many people and they didn't get out of the van.

Jessie and the boys stayed on for awhile. I had known that she was coming over today so when I went to Publix yesterday I bought them some animal crackers in the little red box. They were thrilled. August saved his for later but Levon ate all the animals in his box, asking for ID of each one as he went. 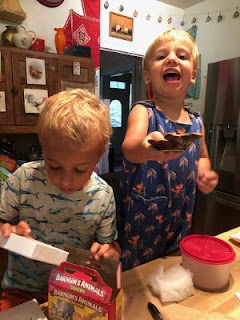 And we read some books. We sat on the love couch in the library and August got closer and closer to me until he was completely smooshed against me and I loved it. We read a beautiful book that Jessie brought with her. Cinders, A Chicken Cinderella by Jan Brett. The illustrations are beyond glorious. 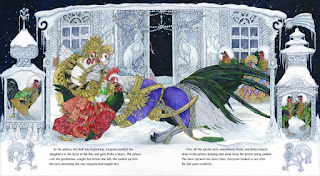 A unique and lovely retelling of the old story.

After I read that one, I read Levon's choice which is about...Dump Trucks!
It's a board book and we've read it a hundred times but he loves it. After we were finished reading it I asked, "Levon, do you want to drive a dump truck?"
And I swear, this is what he said: "No thank you. I want to drive a front-end loader."

Then I came back to life and August and I read most of The Jolly Postman's Christmas. August loves that book beyond reason.
And I loved reading it to him beyond reason.

And so that was my heart-filled day.

I did pick some of my beautiful blooming roses. 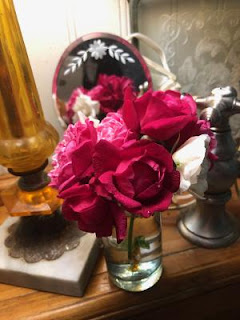 So tiny and fragile but with such a deep scent. I put them in a shot glass and set them in my bathroom above the sink where I will get the most pleasure from them. 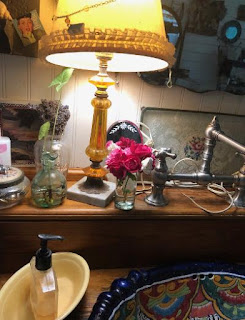 The world is still insane, my country the epicenter of so much of that. But Barack Obama spoke to the nation and although I haven't seen the video I know that with his voice, his calm, his intelligence, his wisdom, he has sent out a message of hope and a way forward.
I am so grateful that he is addressing the nation again because we need his voice so much.
And I got to love my babies a little bit. I sinned and stroked a head of hair or two, felt the sweet pressure of a four year old leaning on my side.
That's not going to kill me.
It has done me good.

Off to make supper. Last night's was unbelievably delicious. 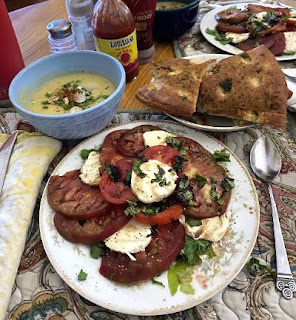 This garden of my husband's and mine is sustaining us in all ways. I feel so lucky.
In all ways.