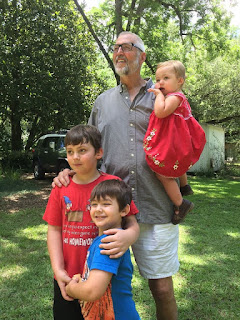 This picture was from three years ago, back in the ancient days of being able to hold and touch. I had posted it on Facebook with the words, "The day I met Glen Moon was the luckiest day of my life."
Some things may have changed since then but that thought is not one of them.
We met. We didn't fall in love.
We met again.
We flirted.
We met again. He asked me to dance. And from there...
Well. Children, grandchildren. Isn't it amazing to think that if he had not asked me to dance that night in stinky, dark old Kent's bar there wouldn't be an Owen or a Gibson, a Magnolia, August, or Levon?
Not to mention their mamas. Not to mention that Hank and May would be far different people and let's be honest- not to mention that there's no telling whatsoever where I'd be now.
If anywhere.
It wasn't until I met him and we fell in love and got married that I felt safe enough, secure enough, to dive down into the dark murk of my mind to figure a few things out, to get the help I needed to not only go on living but to thrive in so many ways. And to be, quite frankly, a better mother.

Hank and Rachel came out today to bring Mr. Moon a card and some cookies that Rachel made as well as a bag of boiled peanuts that were still hot when they got here. We had a nice talk with them and when they left with one bag of green beans and tomatoes, another of venison (which they were going to go put in the freezer of their duplex which they'll be moving into next weekend) Hank said, "Thanks for marrying Dad."
It's been my pleasure.

This morning an old friend who lives out of town dropped by for a visit and I made us all a Father's Day breakfast of eggs and Tennessee sausage and biscuits and tomatoes which we ate on the porch. It was good to catch up. Good to talk to someone from the outside world.
So it's been a busy day in some ways, even as we mostly sat.
I asked the man what he wanted for his supper and he said, "Hank Salad" so I'll be boiling some shrimp here in a moment.

Father's Days can be a bit unsettling for me but not so bad. I did have a father, of course, but what he mostly gave me were some genes, some good, some not-so, and a childhood of heartache missing him even though I know now I was far better off without him. And then I had the stepfather and we don't need to talk about that. But a few good men have shown me sweetness and constancy, Mr. Moon's father being the main one, and then there's Mr. Moon himself and I am proud that I did indeed pick a good father for my kids and despite my trust issues, over the years he has proven himself over and over again to be what a father should be.

So all-in-all, Father's Day isn't that hard for me. Add in the fact that my grandchildren have the best fathers they possibly could in Jason and Vergil and I have a whole lot to be thankful for.
And I am.

Here's to the good daddies. They give their hearts, their souls, their energy, and their time to their children and nothing could be finer than that.