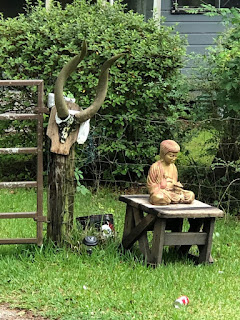 On the bad days, the days that weigh five million pounds, the days that are bereft of anything resembling joy or even contentment, it seems impossible to believe that there have been good days in the past and even less possible to believe that there will be good days in the future.
It is all just a thick wad of gray density, something to fight one's way through which necessitates a slow and deliberate plod.
Today has been one of those and my walk reflected it. It was so muggy and I pushed myself harder than I probably should have and yet, not nearly enough.
Or so it seems on the days when nothing one does seems right in the least.
But so what? 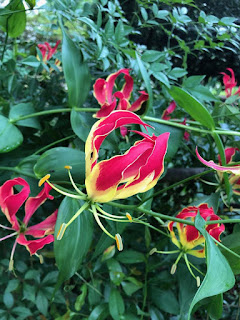 This did catch my eye. It's on my neighbor's fence and is, according to google, Gloriosa Rothschildiana. A very fancy name for a very fancy flower. I would lust after it, wanting one of my own but it's not native here and as such, would only add to the ridiculous number of invasive plants in my yard.

But do you remember this? 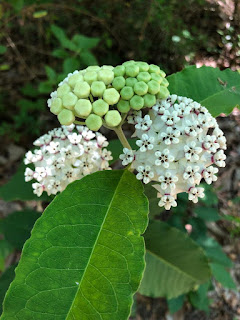 The blooming Red Ring Milkweed that I saw on a different walk? Which is native?
Well, I did a probably terrible thing last week and pulled up a small piece of it and brought it home. I berated myself because I did not do a good job getting roots and had very little hope that it would survive but I stuck it in a vase with water until yesterday when I pulled it out, still very much alive, and stuck it in a pot of soil. 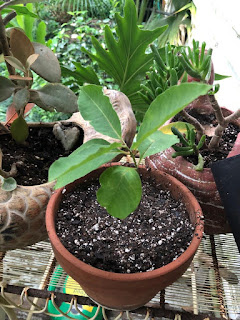 I've got it right by the kitchen door so that I'll see it and be reminded to keep it watered while it hopefully roots.
And this small thing, this plant that I pulled from its woodland spot where it was so obviously happy, brings me comfort in its merely remaining alive.
For now.

We got a bit more rain today on and off. It would come and pour down, stop, and the sun would come out as quickly as it had left, as if it had merely gone into another room to check its make-up and then reappeared. Good growing weather, I think. 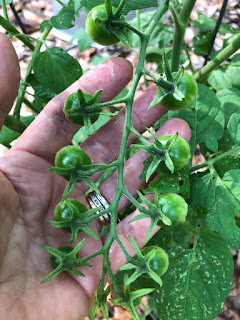 The baby cherry tomatoes are coming along. 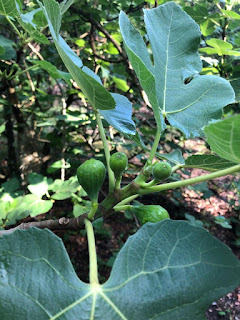 The figs are swelling, still green and tight on their stems.

These seeming promises of future fruit (and I am not here to debate whether tomatoes are fruits or vegetables- quite frankly, I don't give a shit) are false promises. Between bugs and birds and heat and squirrels, the odds are not great that we will be eating any of of these things.
I did count my chickens before they were hatched today though. Or at least Darla's eggs.
There are eleven.

I just took a tick off of Mr. Moon's back in almost the same location he removed one from my back a few days ago. It's a ticky spring. This makes a total of three we've found on ourselves.

But yeah, overall I am aware of my good and vast fortune.

And why do I even have to keep repeating that?