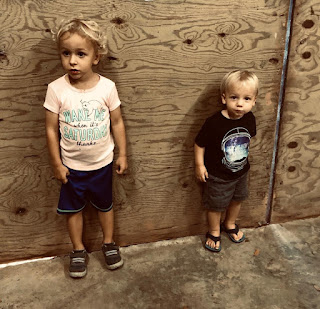 I know. It looks like these poor children are being interrogated, doesn't it?
But no, they were just standing far back while their grandfather drilled through a lock on a box.
It's a long story but it was sort of a fun project to watch.
Who knew we had a drill press?
Not me.

I got zero good pictures from today but it was a good day, nonetheless. I was a bit worried about Levon because he's the most mama-boyish of all the kids I've ever known but honestly, he was downright merry. Once, ONCE, he said, "Mama?" and I said, "Mama and Daddy went bye-bye for a little while."
He did not bat an eye but proceeded to have more fun.
There was not one fuss. He just transferred his need for Mama to MerMer and he also had a good time with his Boppy whom he (surprise, surprise) adores.

We did go down to the post office/old train depot and I have to say it was pretty pathetic. They opened up the part that is usually closed and it had a few benches in it and a few fairly non-interesting displays of train stuff. Mr. Moon put a good donation in the box though and we did get some hot dogs and a bag of chips. Then we went across the road to where the St. Elizabeth AME church was having a fish fry and bought two mullet dinners and brought those home where there was plenty of Crystal hot sauce. 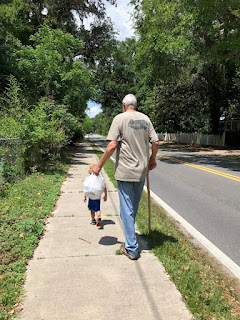 This is what a church-sold mullet dinner looks like in the deep south: 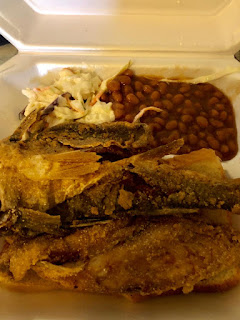 You got your fried mullet, you got your coleslaw, you got your baked beans. And two slices of white bread under the mullet which makes it a sandwich.
We split up the dinners and enjoyed them, especially Levon. That boy can eat.

We did some other stuff. Read books. Changed diapers. Watched a little TV. As I mentioned, drilled a lock. Gathered eggs, ate graham crackers and milk. I received a kiss-attack from the both of them when we were laying on my bed reading a Richard Scarry book. I don't know what instigated that but it happened. And then Vergil and Jessie got back from Thomasville, Georgia where they had taken their semi-day off to lunch and shop and August just wanted them to collect Levon and leave him here alone with his grandparents and Levon didn't appear to be too excited but did have a little bit of nursey before he asked me to read his truck book to him again.
"Heavy" he kept saying about it and it was about dump trucks and their loads ARE heavy indeed.
He's a smart kid.

And that's how it went. I'm cooking some chicken to make chicken and dumplings. August's bed is all ready for him. He didn't take a nap so he's probably going to need to go to bed early tonight. And I better get in that kitchen and get busy chopping vegetables and making dumplings.

We do not go hungry around here, do we?
No. No we do not.

And as August said to his parents as they were leaving and he was busy peeling a length of bamboo- "Bye for now!"
Really. He said that.
He's a crackie.