I'm Old And I Know It

Went outside this morning with my little bowl of chopped up grapes for the babies only to discover that one of the chicks had escaped from the peep coop. 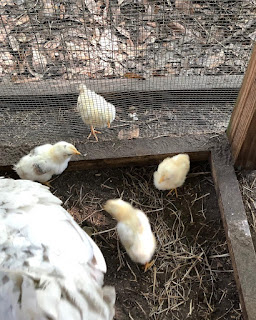 Of course she was frantic, trying to get back in to Mama and Mama was frantic, trying to get her baby to come back in. There was a little place that had been scratched out and the tiny Houdini had escaped through the opening there. This will NOT be the last time one or all of them get out. It's impossible to keep the frame securely on the dirt with six chickens scratching around the edges.
Later on today I was reading August this story by Richard Scarry 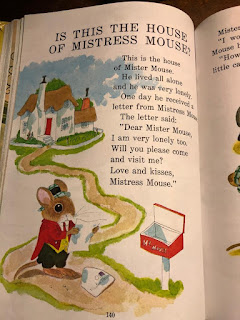 which, by the way, is one of the best stories I've ever read. I mean- check out that first page. You just know you're in for some romance and adventures, right?
"Mistress Mouse is a bold little hussy," I told August after I read that page.
"Don't listen to your MerMer," said Jessie. And we both laughed so hard.
Anyway, Mr. Mouse takes off in his car to try and find the lady mouse who wrote him that letter because she neglected to give him her address and in one of the houses he knocks on the door of in his search, this is going on: 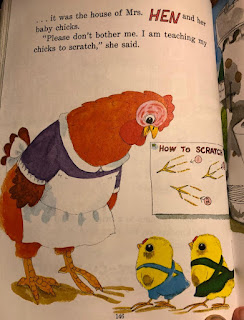 I laughed at that too because mother chickens do spend a great deal of time teaching their chicks to scratch but they don't usually use diagrams as far as I know.
But I was charmed.

I managed to get the little yellow chick back with her mother and her siblings and I put a brick where the escape route was and we'll see how long that works.
Not very, is what I'm thinking.

So yes, Jessie and the boys came out and it was pretty perfect after being all by myself for two entire days. We read a bunch of books, some in the library and some on my bed. As soon as he got on the bed August got right under the covers as all of the grandchildren do. I pretend to fuss about dirt on the sheets and say things like, "I just made this bed!" but they know I don't really care. In fact, there is very little in this world that I love more than the knowledge that my babies feel safe and secure, cozy and comfortable in Mer and Bop's bed while I read them books. It's such a joy for me. We read another story by Richard Scarry's wife, Patricia Scarry, about a little baby rabbit who wants to grow up to be a daddy who takes care of his children.
I asked August if he was going to be a daddy when he grows up.
"No," he said. "I'm going to be a mommy."
Well, okay then! He's going to have lots and lots of children and later on in the day he told me that there were going to be many daddies in his house when he grows up and has children. Many daddies.
Sounds cool to me. I asked him if I could come and live with him and all the daddies and children. He said I could.

Jessie and I couldn't figure out what to do. We both needed to go to Costco but Costco is closed on Memorial Day. Publix would have to do for the short term. It was also lunch time. Where should we go? Could we fit in a trip to Target to return some things Jessie recently bought? Could we find time to go to the Goodwill bookstore?
As we pondered all of this, Levon and August formed a boy band in my kitchen. 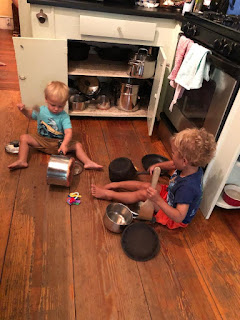 Do you see that Revere Ware pan that Levon is banging on? That was his great-great grandmother's pan. That's a little hard to believe, isn't it? They used to make that shit to last. I use it all the time.

We finally got it together and drove to town in separate cars because I didn't want Jessie to have to drive me all the way back to Lloyd. We first went to lunch (priorities, people!) and then to Publix.

As we walked around the store with two boys in a race cart, I told Jessie that you know you're old when going to Publix with your grandchildren is about as much fun as you can imagine. If their mother is there too, of course.
But how could this not be a merry time? 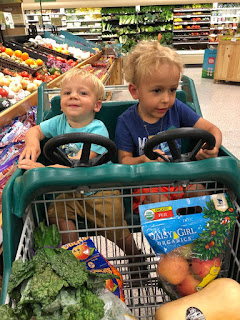 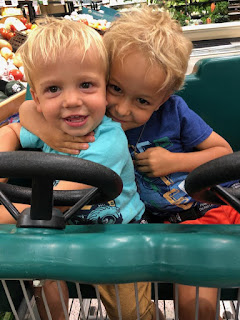 And after that, Jessie was ready to take those rascals home. Forget Target. Forget the Goodwill bookstore. And actually, one of the dresses she was returning worked quite well for me and so I bought it from her so that was nice for both of us. In fact, I wore it on our outing. It's incredibly soft and I'm sure I'll wear it until it's a rag.

So those were the high points of my day. I came home and got the clothes off the line and folded them and put them away and cleaned up the kitchen and started the dishwasher and replanted a maiden-hair fern that some damn chicken plucked out of its pot and and watered some plants and planted two nice succulents in my hen pots. 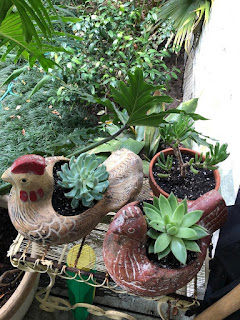 I had other plants in there but I transplanted them to other pots.

Mr. Moon is back in Las Vegas and here's a picture he sent me from the journey between St. George, Utah and Vegas. 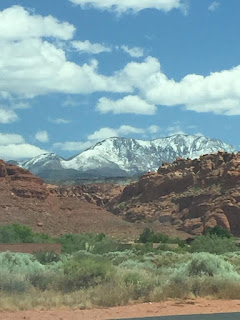 What can you say about that besides, magnificent?
The United States has some amazing landscapes and that is the honest truth.
Of course, we also have this. 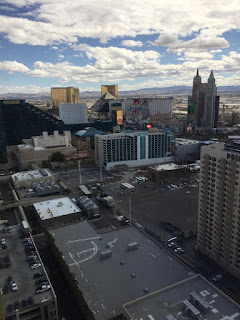 That's the view from his room which is also magnificent in its own way. And yet...SO Las Vegas.
There's a tiny part of me that wishes I were there with the crazy cacophony of the slot machines' dinging and ringing and the insane craziness of a golden pyramid and a miniature New York city, not to mention the fountains of the Bellagio and its lobby with the unbelievable glass ceiling sculpture by Chihuly which has to be seen to be believed but mostly, I'm just so glad I'm not.
I've been there.
I've done that.
And I've had some very good times in Las Vegas but I think those days may be behind me.

The cicadas are tuning up for their evening choral presentation, the chickens are getting settled in the roost. I have the most comfortable bed in the world and a good book I'm reading.
I'm content right here in Lloyd.

I'll check back in tomorrow.