Not Feeling Too Optimistic 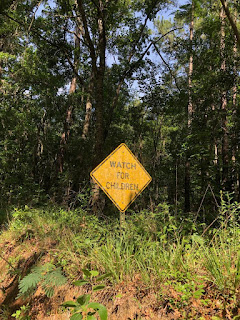 When I come to that sign on my walk I have completed one mile. When I'm walking on White House road, that is. Here's the funny thing- I've never seen a child on this road, even though I have been alerted to watch for them.
Yeah. Not really that funny.

I want to thank everyone who shared their birth experiences here. I will answer each comment. They all tear at my heart and make me remember how it used to be. I do think things have changed but some of the changes are not for the good. For one thing, there is entirely too much reliance on dates and on sonograms to determine when a baby "should" be born and there is an emphasis on being "overdue" that is, I feel, not very helpful. Why we continue to want to put every mother and child into a graph of what is normal and not normal is beyond me and in doing this, we create a lot of what I consider to be mostly unwarranted worry not only concerning dates but also weight. Once again, so very many doctors are reluctant to trust that most women can give birth to larger babies and warning women that their babies are becoming "too big" leads directly to a great many births being induced with hormones and drugs that are not truly proven safe when with a little time and patience and trust in the process, the problems that induction can cause are eliminated.
When I had Hank, the doctor told me after the birth that honestly, he did not think I would have been capable of delivering him and that he had been thinking that I would need a C-section. That if I had come to the hospital when I was "supposed" to, I would have indeed had one. So those long, long hours of labor that I went through allowed my body to do what my body was meant to do- to shift, to adjust, to open and to allow me to push that baby out.
And Hank wasn't a huge baby. Eight pounds something? I can't remember.
The doctor didn't tell me that it was a good thing I'd stayed at home for the labor and thus prevented surgery, I think he was just a little bit stunned that I'd been able to do what I'd done but of course he wasn't happy that I'd done it. I'd proven nothing to him. The difference in having a C-section and in giving birth vaginally probably didn't mean squat to him but to a woman, it's a huge difference. For one thing, yeah, it's major surgery and thus carries risks that vaginal delivery does not. Also, that being my first birth, I never would have been able to have my subsequent babies vaginally as the trend then was to have all C-sections after the first. This is still the philosophy of many doctors.
So. In a lot of ways, not going to the hospital early on changed my life and the life of my family.
I'm so grateful that Cesareans are available for women who need them and sometimes they definitely do but certainly not as often as they are performed.

Okay. I'll stop talking about this for now. 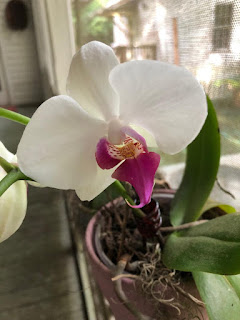 Speaking of lady parts...
I can't believe it but one of my orchids is blooming. For years I've been saying that my orchids never die nor do they bloom. But this one has two flowers on it and I am a bit amazed.

I really don't have much to say today. The daily events in Washington never cease to anger me, enrage me, baffle me, and it seems that lately they have been occurring at what one of my grandchildren might call super speed. This whole executive power thing is unbelievable. The information that Trump was literally America's biggest loser of income for a decade is another. Iran? Are we going to go to war with Iran? The news that Trump and Cohen managed to get rid of dirty pictures of Jerry Falwell, Jr., thus ensuring the evangelical vote. Does Congress really have the right NOT to impeach this president? Isn't it like a cop, sworn to duty who witnesses a crime? And it's not just what Trump and his people are doing, it's the fact that his supporters still adore his motherfucking ass. Yeah, that's the worst part. That's the part I'll never understand. Or get over.
And let's not even talk about another school shooting. Or the fact that a woman can get the death penalty in Georgia for abortion.
It's all too much. It's all too fucking much.

I'm overwhelmed.
And it's hot. And I'm not handling my own life very well.

Perhaps I need to be patient with the process. That all will unfold as it should...eventually.
Even if that means we humans fuck up the planet so badly that all life as we know it ceases.
Yes. That would be the extreme case.
I have no doubt it could happen.
Lately I have little trust that it won't.