Power To The Women

Well, hell. AOL (yes, AOL and go ahead and laugh) seems to be down which is a pain in the ass for all fifty-six of us who still have our email accounts with them. What this means for me right now is that I can't send pictures from my phone to my laptop where I write my blog posts which sucks because I have a really cute picture of Magnolia that the world is the worse off for not being able to see.
Honestly, I hardly ever have a problem with my AOL account so I'm trying to be all Zen about it and shit because what else can I do?

I had a very nice day with my daughters. All three of them and Rachel, my future daughter-in-law had lunch with us and so did Magnolia, my granddaughter, so you can imagine that I was very happy to have been lucky enough to enjoy the company of all of these beautiful women and a woman-baby. It was a good thing because I woke up at 1:30 this morning in existential despair and although I was able to go back to sleep I woke up many times after that, still in that horrible state of mind and when I finally got up, I was no more cheerful than I had been in that deep part of the night when things are traditionally so very, very dark and seemingly insurmountable.

We all went and got pedicures and I have to say that this was the first time in my life that I ever got a pedicure when I still had the polish from a previous pedicure on my toes. We had a really good time, May and Lily and Jessie and I. We so rarely get to hang out with May but she was off work today. We were all pampered and painted and polished and prettied (or at least our feet were) and we talked about everything from podcasts to the prison system.
Afterwards Jason dropped off Magnolia on his way to work and we all met Rachel at a sushi restaurant, where there was only one server for many people but he was so cool and so professional that we never felt ignored or slighted and just reveled in the extra time we had together. It was a beautiful meal in every way.
After we said our good-byes, Jessie and I went to a Goodwill but it was not a very productive experience. As I said to Jessie, it looked as if the entire Nation of Polyesters had died and someone had donated their clothing to this particular store. Not just polyester but DOUBLE KNIT which some of you may be so mercifully young you do not remember. Jessie did score a lovely little kid piano with a bench for August and Levon so that was good.
And then I came home and did a little bit of ironing and I'm back to feeling somewhat dismal again. I don't know what's wrong with me. It's possible I'm going through an old-age crisis which I have discussed here before and it's also possible that I should not have weaned myself off of my antidepressant.
I was taking so little of it and it didn't seem to be doing much and of course you read all of these articles about how placebos work as well as the medications do but perhaps I've made a mistake. I don't know. I do know that it took me months to wean entirely off of it and going back on it seems as if I am admitting defeat but defeat against what?
Normalcy?
Fuck if I know.
And I will admit that I am still taking a very, very lose dose of another antidepressant which my doctor prescribed to help with side effects that the first one was causing so I'm not entirely brain-altering drug-free.

But you know what? None of that is really what I came here to talk about. What I came here to talk about, what is foremost on my mind right now is something that I heard about on NPR as I was driving home. I had read on the news on my phone that Meghan Markel and Prince Harry had their baby today and I was happy about that. Yeah, yeah, what's the point about getting excited when a royal has a baby and who cares and blah, blah but dammit! It's a lovely thing when the world stops for a second to celebrate the birth of a child, I don't care whose it is. And although no one has confirmed it entirely, it would appear that the baby was born at their home which, granted, is what most of us would label a palace even though it's called a cottage.
And you know me- I'm all about home birth when it's a safe alternative and I am quite sure that it was indeed a safe alternative for the Duke and Duchess of Sussex. There was probably an entire surgical ward set up and staffed in case there was need of an emergency C-section.
But guess what Dr. Timothy Draycott, envoy of the Royal College of Gynecology said recently at a meeting of the American College of Obstetrics and Gynecology in Nashville, Tennessee about the Duke and Duchess's birth plan?
"Meghan Markle has decided she's going to have a doula and a willow tree...let's see how that goes!" And the room was filled with laughter and merriment.
He continued, "She's 37, first birth...I don't know."

NO TIM! YOU DO NOT KNOW.

Fuck him.
Fuck doctors (especially male doctors) who make fun of women who want to have their babies at home in their own beds with a midwife.
You know what? I have been fighting for women to have the choice to birth in their own homes with midwives since 1976.
And guess what?
This shit is still happening.

According to what I've read, Meghan went into labor in the early morning hours and gave birth at 5:26 a.m. Mmmm...even if "early morning hours" means 12:01 a.m., that would mean a less than five and one half hour labor. For a first baby. With a "geriatric" mother. Yep. That's what they call women who are giving birth after the age of 35.
And hey! I could be wrong and Meghan had to have a C-section. I don't know for sure but when you have a papa who looks like this: 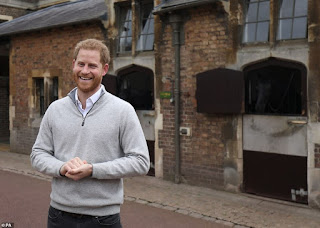 who says things like, "How any woman does it is beyond comprehension," I think maybe not.

And what I have to say is FUCK YOU, DR. TIMOTHY DRAYCOTT!
Even if the birth was Cesarean, it is entirely and perfectly correct for a woman to be able to choose how she would prefer to give birth and to have faith in the process and in her own body.
Which is the problem.
Doctors are trained to believe that women's bodies are not capable of what women's bodies have been doing for tens of thousands of years.
Not always perfectly- I understand that.
But when there is back-up and when there are trained assistants who help a woman do what a woman can do, it is a beautiful thing. And a safe thing. Study after study has shown that women who have low-risk pregnancies are just as safe having a baby at home as they are in a hospital if they have proper assistance. And as for doulas? Studies show that women who have them when they labor and give birth have better outcomes and lower rates of complications and interventions than women who do not.

You'd think that someone who is the envoy of the Royal College of Gynecology would know that, wouldn't you?

As to the willow tree- not sure what that's all about but if having one available makes things easier for laboring women, I wish I'd had a few.

Congratulations to the newest member of the British royalty.
And to Amy Schumer too. And to every woman who gave birth today on this whole entire planet.
Every damn one of you is amazing.
As are women and our bodies.
Trust me. Trust us.
Please.