From Chicken And Dumplings To Shrimp Quesadillas With Ponderings Inbetween 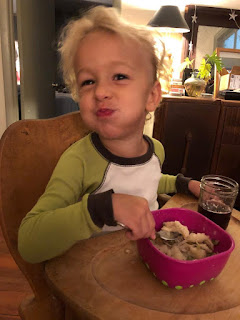 August ate last night's chicken and dumplings like he was motorized. He loved them.
"These are the tastiest in my world!" he proclaimed.
We kept telling him to slow down but he apparently was powerless to do so. And they really were good. I made the "yankee" dumplings with nothing in them but self-rising flour, baking soda and buttermilk. They were so light and mouth-melting that they seemed to hover over the broth with chicken and celery and onions and carrots and peas and green beans and mushrooms. My chicken and dumplings are extremely nontraditional but they are awesome. And not that bad for you, either, if you add in all those vegetables and use skinless chicken breasts. Which I did.

Then it was off to bed for the little man. I read him about five books and then tucked him into his bed with two big bears for company. When I went in to check on him before I took my shower it looked as if one of the bears was pinning him to the mattress. 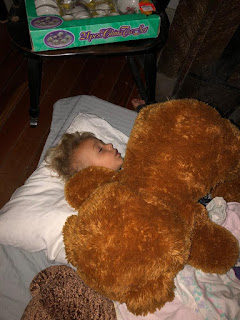 I took the bear off of him and gave the animal a stern warning not to do that again.
He slept until seven and then got in bed with us. I can actually sleep with a child wallowing around behind me in the bed but Mr. Moon can't so he got up with him and put August on the couch and turned on the TV and he got into his chair and finished his night's sleep. I finished mine in the bed. When I got up I gave the poor starving child a yogurt and then made pancakes and bacon. They, too, were consumed in record time. I think that the very act of living in August's body requires a great many calories.
Unlike living in mine.
But that's another story.

After breakfast there were more books. I asked him if he'd had any dreams the night before.
"Just one little one," he said.
"What was it about?"
"I dreamed I felled in love with Mommy. My mommy."
I told him that was so sweet. He agreed it was. When I told Jessie about that she said that he seems to felled in love with her in his dreams fairly frequently. He also reports felling in love with me and with Boppy.
Again- I do love a three-year old. They're old enough to tell you what's on their minds and what's on their minds is still so untainted by societal rules. And as we all know, none of us have dreams that stick to the rules but when it comes to telling others about them- maybe not, unless we're paying them to listen.

After his mama came to collect him it became just a normal day. It had been raining on and off, finally and at last and thank goodness. I did laundry, swept some floors, mopped where grape juice had spilled last night, swept the front porches clean of oak leaves, found three eggs in a potted plant, and watered the plants. Just little things that make me feel a bit more settled in my soul.

I watched an episode of Chelsea Handler's Netflix series called "Chelsea Does" about race. Well, I haven't finished watching it. I wasn't ironing or anything, just sewing up an undoing in a skirt seam. It disturbed me so fucking much. The part that was hardest for me to watch was filmed in Tallassee, Alabama, not to be confused with Tallahassee, Florida. There was a whole Confederate thing going on with Civil War reenactors. It's so damn painful to watch because a lot of the white people who were interviewed spouted the same bullshit lies about the Civil War and slavery that I heard everywhere growing up. The ones that get me are along the lines of, "Well, it was really all just like one big family on the plantations." And of course, "Only a few really mean people beat their slaves. Most people were kind to them."
Etc.
You know what? I didn't believe that shit when I was seven. Plus?
Slaves.
I'm pretty sure that one word is all you have to know.
And it's so embarrassing to hear a big ol' redneck say things like, "People just believe that all southerners are stupid, ignorant hillbillies," in a stupid, ignorant hillbilly accent because you know what? I say that too. And I know that we AREN'T all stupid, ignorant hillbillies down south, even if our accents would make you think otherwise.
I belonged to a FB group called something like "Florida Pioneers" at one point because I do love the history of Florida but I soon realized that there were about zero Florida pioneers of color represented and that's not even good history. And then, AND THEN, a few people started showing their true colors, mainly the ones on the Confederate flag, talking about their heritage and shit and after I got into some verbal sparring and was told that I just didn't know what I was talking about and didn't I have any pride in my ancestors, I unfollowed.
Fuck it.
But not until I had stated that yes, some of my ancestors had indeed fought in the Civil War and had also owned slaves and lived on plantations and NO! I was NOT proud of that fact.
I'd be a lot prouder if I was the descendant of one of the slaves who'd escaped before the Civil War and joined up with the Creek Indians to form the Seminole tribe which is still the only tribe of Native Americans who never signed a treaty with the US government.
Now THAT would be something to be proud of.

So Lord, Lord. I guess that Ms. Chelsea's little episode triggered something in me. Something that's in all of us, especially those of us who live here in the deep south.

And in further possibly racist themes, I am making shrimp quesadillas for our supper tonight and not because it's Cinco de Mayo which is not the Mexican Independence Day no matter what most of us ignorant US citizens think. No, I'm making them because I have a shrimp to use up and also avocados and I'm in the mood for them. They won't be nearly as good as the ones we get at Playa Corona in Cozumel. Nothing could be that good. But I'll do my best.

Thanks for coming along with me on these stream-of-consciousness journeys. This is the way my mind works, the way my days go, the way my life flows.
I seriously doubt I am unique in this regard.