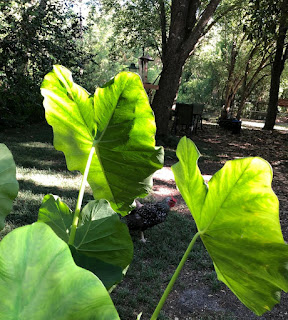 Hot, hot, so very hot. Going to get hotter. That's the late afternoon sun shining through some elephant ear leaves outside my back porch. If you look carefully you'll see Big Mama having a strut through the grass between them. I've got to be careful to make sure that all of the chickens have enough water in the next few days when the temperatures are going to soar even higher. I've got grapes to cut up to give them and maybe I'll even cut some up and freeze them for a treat.

Mr. Moon did get back last night, safe and sound. Turns out that it wasn't just the tire but also a spring that was attached to the trailer that broke and he ended up having to leave it anyway. We'd hit a pothole on the way down to St. Marks and I'm sure that's where the damage occurred. But all's well now, I guess. I don't even know where the boat is at this moment and Mr. Moon's heading for Las Vegas and St. George, Utah tomorrow morning early so wherever it is, I guess it's going to stay for a few days. He's going out west to be with some of the last of his family, his sister and two cousins and their spouses. I was invited and did intend to go until huge and horrible anxiety about the whole deal overtook me and I finally broke down and told my husband that I simply could not go. I mean, I'd go if someone's life depended on it but I don't think this is the case in this situation.
One would think that I'd jump at the chance to leave Florida and this heat and the bugs behind for a few days but one would be wrong. There are more than one kinds of discomfort and as so many of us humans do, I'd rather deal with the discomfort I'm used to.
Dance with the devil you know, they say. Or maybe they don't but I suppose that's what I'm choosing.

Still, this does not mean that I don't feel guilty and of course I do, despite my husband being so very sweet about the whole thing. God, he's patient with me.

And today is May's birthday! Also Bob Dylan's but I'm not his mama. I knew that she was working today but I still wanted and needed to see her, to get my arms around her, to kiss her and tell her I love her. And give her the present I bought her. Lily wanted to go too and so I drove to her house and she drove me and Magnolia June into town where we stopped at Publix to buy a pretty little cupcake and I got a beautiful blooming bromeliad. When we checked out the lady at the register did the sweetest thing. She said, "Beautiful," as she was scanning the plant and I said, "Isn't it?"
"Oh, I meant you, too," she said.
"What?" I asked. I feel so far from beautiful these days that it's not even in the same continent as what I perceive myself as looking like.
"Your earrings, your necklace, you," she said and she gestured widely, "Beautiful, all of it."
I wonder if she has any idea how much that meant to me. Of course I thanked her and told her that she was precious and I meant it with all of my heart.
After Publix we stopped by Jessie's house to pick up some flowers she'd grown and made into a bouquet as well as some eggs for May. August and Maggie had a little chat. I often think that they look upon each other as alien beings. They are so very, very different in so many, many ways. And yet, they do have great affection for each other. Levon announced that they were going to go to a pool with Dad. He did this by saying, "Dad!" "Pool!"
I understood.
I love his stage of babyhood. Yesterday at the library we did some coloring together. There were colored markers and I would hand him one and say the color.
"Purple," I told him and he said back, "Pupple." Then he would take the top off the marker if he could and if he couldn't, he'd hand it to me and say, "Help," and I would. He'd scribble a few lines on the picture and put the top back on the marker and want another. I traced his hand for him. He held it flat on the paper like a little starfish, so trusting and so sweet. He is, like all of my grandchildren, amazing and completely himself.

But I'm straying from my aim which was mainly to give you these pictures. 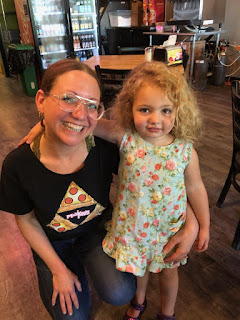 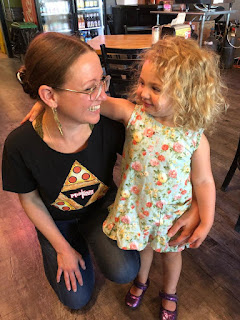 May and Maggie.
Maggie and May.
On my children's birthdays I get quite emotional. I know- big surprise, right?
But I can't help it and a part of that is wanting my children to know how profoundly and deeply I love them and there just doesn't seem to be a way to adequately express that. Lily and I were talking about this and I said, "Well, maybe if I bought each of you a house..."
But even then, I don't know that my soul would rest easy thinking that finally and at last I'd shown them my true heart feelings.
And yet, I really do think that all four of my babies know how I much I love them. I do. But somehow in my soul, I'm never satisfied that I've expressed how I truly feel. I can't ever stop showing them, telling them. There won't be enough time in my entire life to satisfy that need within me for them to absolutely know.
And now there's the grandmother in me that feels the same way about my grandchildren.
Oh hell. I'm not sure that thinking this way, feeling this way is quite healthy. But it is who I am. That's all there is to it.
And the pretty bromeliad I gave May and the beautiful eye-shadow palette which I hope will help to make her feel pretty and which will perhaps satisfy some of the artist in her don't even begin to represent how much I love her.
Forty-one years ago today I gave birth to her on my bed in a tiny house-trailer on a piece of property a few miles down the road from where I live now just as the sun was coming up. Her father was there, my midwife and three women-friends were there and as I held my beautiful daughter, a part of my heart that I did not know was there busted wide open.
My darling May Ellen.

Lord but I am a sentimental old fool. I am also a woman who did not discover the true meaning of love until I had my children which is perhaps why I feel so inadequate to the task of expressing to them how they have given me the goodness in my life that I never, ever would have known without them.

So. Happy birthday, my precious May. Look how beautiful you are! And look at the way Maggie is looking at you. Her expression pretty much says it all about how lucky I am to have this loving, amazing family. Not to mention how brightly your light shines- so bright that all of your nephews and your niece too are drawn to you and your good, joyous soul with such natural and sweet affection.
You are loved and not least by me.