Florida In All Of Its Wild Glory, Or...Too Much Nature, Part Nine Hundred And Forty-Seven 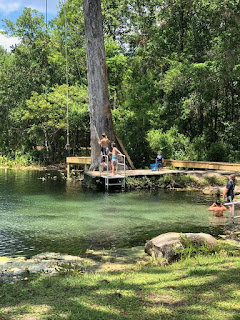 Well, Ms. Moon, are you going to spend your entire summer in a river?
I just might.
The Wacissa was back to its beautiful self today and not too crowded. This is all about to change because school is ending and mothers, desperate for free things to do with their children to keep them from killing each other with boredom during the long, hot days of vacation will be hauling kids by the van loads to the river but it sure is nice now.
Soon the older kids will be there too, the middle school and high school aged kids, full of hormones and that itchy adolescent feeling that something should be happening.
As I always say, boys that age are supposed to be out hunting the mastodon but these days that's not possible and so they find other ways to channel that energy and let's face it- it can be annoying. They'll line up for the rope swings and they'll bring their music which they feel must be played loud enough for everyone to enjoy. They'll show off for each other and curse with great vigor and skill. The girls will be aware of each and every move and romances will begin as romances have always begun in summer and always will be.
Ooh boy.

But for today, Owen and Gibson were some of the oldest children there and little ones splashed in the shallow water near the beach and dug in the sand 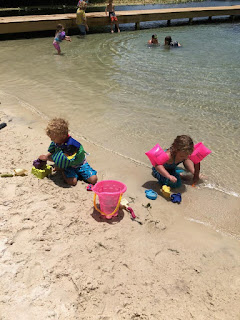 and played without regard for kinship or even first names. Maggie made friends with a little girl about her age and they spent the better part of an hour taking turns pulling each other on a boogie board. I went out to the water to dunk my body and cool off and Maggie paddled out to me and hugged me and then said, "I have to go play with my girl," and paddled back off for more boogie board adventures.
Lily says that Maggie refuses to call other little girls by their names. They are all "girl" to her.

It really was a beautiful day. Not as hot, and breezey in the shade although the yellow flies still tormented us. At least if you're at the river when you're bit you can submerse the itchy places in the cold water and that does help. We all brought fun food but nothing too junky and it's so true that food eaten outdoors is always the best food.
Here are some pictures that Lily took: 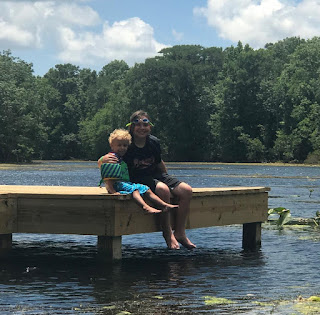 Owen and August on the dock. I just mentioned yesterday how sweet Owen and Gibson are to August and Levon and it's true. When it was almost time for every one to leave today Lily wrapped up August in a towel and held him like a baby and crooned to him and he smiled and snuggled up next to her bosom. Owen held his arms out and said, "Oh, what a beautiful new baby you have! Let me hold your new baby!" And Lily handed him over, the little sunflower-headed boy in his towel and Owen told him that he was such a nice new baby. August loved it. 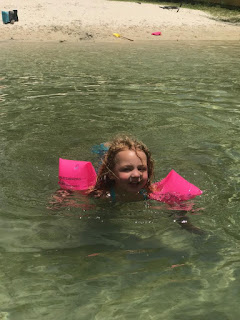 Ms. Magnolia June, swimming in the cold water of the Wacissa.

And this one is blurry for some reason. Something on the lens? Whatever, it's adorable. 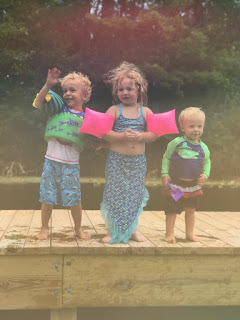 I saw the daughter-in-law of two of my oldest friends and she was with two of her three kids. Their youngest is graduating high school tonight. How can this be? Her husband was born a few days after Hank the summer that every hippie woman I knew got pregnant.
Speaking of fertility (and we were, weren't we?) a woman I vaguely know but who is quite well-known in these parts because she is the mother of eleven children was also there with a few of her brood. She and her husband are indeed Christians and she home schools her kids and for all I know, she's pregnant with their twelfth but I have no evidence for that. She is one of the most placid mothers I've ever seen and her children obey her every word. She never has to raise her voice to them. She speaks, they listen, they comply. If only every mother could develop this sort of calm and undeniable authority without having to go through eleven pregnancies, births, and child-rearings.

So it was just a great day at the river and when I came home I took a little nap and then went out to check on my chicks and make sure they had food and water but before I even got into the coop this is what I saw. 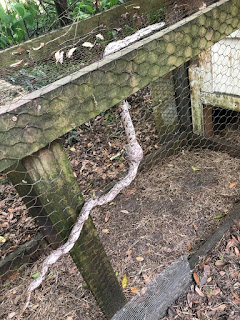 An oak snake had obviously gotten into the hen house and had an egg meal. Can you see the tell-tale egg shape there?

Oh god. I rushed in to see if the babies were all there and they were but that doesn't mean they will be tomorrow.

It is definitely time for my husband to get home.
I do not do snakes. Not even the non-venomous and often helpful snakes like this one. Nope. No way. Not at all.
I appreciate them. I do not want to kill them. If I see one I do not scream and run.
But.
I do not touch them. Not even with a pitchfork. Or a ten foot pole.

Most fortuitously, my man is getting home late tonight.
Good timing, I'd say.
Welcome home, baby! I love you so much! Now go do something about that snake!

Hey! I shaved my legs. I don't just love him for his snake-handling abilities. He is a man of many talents.

One more thing- a small but profound miracle occurred last night. Maurice slept through the entire night with me, cuddled up and even though I reached to pet her several times, she did not scratch or bite me once. I could almost feel her fighting the urge to catch up my hand in her toe-swords and sink her fangs into me but she restrained herself.
It was sweet.

All right. I guess I've told you everything. It's unbelievably more comfortable tonight than it was last night, temperature-wise, and we may get some showers tomorrow. I hope so.

And now aren't you even more convinced that moving to Florida is just what you need to do?
Yeah. I thought so.