This Is Ridiculously Long 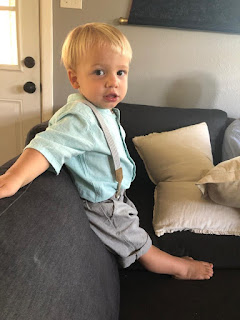 Despite, because...yesterday was hard.
Not because of Jessie's birthday. Despite Jessie's birthday. It was also my mother's birthday and although she is gone now, there is still a power in that fact and my body, I think, holds it. I also somehow woke up with the sure certain knowledge that Jessie and Vergil and their boys are going to be spending the summer in North Carolina and although I think that this is the very most wonderful thing in the world for them and for the marriage and for the continuing strength and happiness of the family, I will be quite honest and quite self-centered in saying that the idea of not seeing those boys at least twice a week, if not more, not to mention their mama and daddy cracks my heart in two.
So let's just say that I had a lot of emotion going on. Way too much, in fact. I could hardly move. I was paralyzed with something so deep that I may as well have been shackled and bound and I barely moved all day.
I literally could not.
I slept for some time and that was a blessed relief.
When it was time to get ready to go pick up Rachel I did manage to do that. I took a shower, put on my favorite dress and Mr. Moon and I drove to town and we got our daughter-in-law to be and drove to Jessie's house where the boys were beside themselves with the crazy glee of a party and cake and loved ones. Jessie dressed Levon in that precious linen outfit you see up there in that picture and he was as handsome as a small boy can be.
We had a drink and then headed to the restaurant where we were to meet May and Michael. Hank and Lily both had to work so they couldn't be there.
The place Jessie had chosen for us to eat is a restaurant that Mr. Moon and I went to every Friday night for years. I mean seriously- every Friday night for many, many years. We always sat at the bar in front of where the chefs worked, where the salads were made, where the plates were created. We had our routines and our rituals and it was strange and wonderful, both, to be back. We were greeted by the hostess whom I did not recognize from the old days but from her very face and features.
"Are you a Wharton?" I asked her.
"How can you tell?" she asked me.
And yes, she was. She is the granddaughter of the two people that I met in the first days I moved to Tallahassee back in 1974. Her grandmother was pregnant with her daddy at the same time I was pregnant with Hank. Her grandfather and my first husband played in a band together.
We go back.
More emotions.
And then...our server greeted us. And yes, she is someone I know from all of our years of Friday nights. And to cap it off, her mother taught my first Lamaze class. We hugged and hugged.
More emotions.
It was a little crazy and I felt more than a little crazy. I felt big crazy. Why do I make such common, every-day life events into such huge things?
I have no idea. It's who I am. 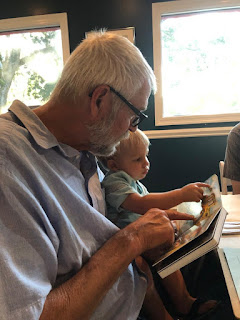 There was so much love and so much fun. The little boys could run around because we were in a huge room (new since we've been there) that only had two big tables. We were at one and another birthday party was at another. 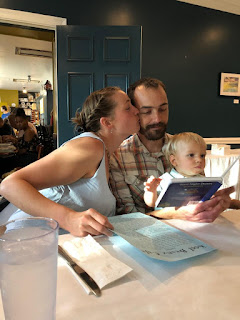 Both little boys were enchanted with their beautiful Aunt May and would not let her have a moment's peace but I think she was okay with that. 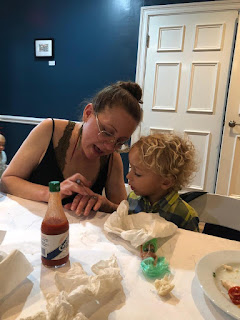 Rachel took some gorgeous photos but I'm having problems transferring them from the Google drive folder to this blog.
Sigh.
Trust me. There was a lot of silliness and kissing.
We ate delicious foods and all the while I just felt so off. I was neither in that world or any other and yet, of course I was, and needed to be. It was my daughter's birthday and I was in a wonderful familiar place with some of my most beloved loved ones and yet, I was still curled up on my bed, and at the same time, I was holding my baby Jessie for the first time, and then again, I was a small girl getting up very early on May 1st to pick a basketful of flowers for my mother on her birthday in Roseland.

Well. It was what it was and I tried my hardest to BE HERE NOW.

Jessie seemed so happy. Vergil had given her a gift certificate for a massage and had gotten off work early to take care of the boys while she got it and he'd written her a beautiful letter and he and the boys had walked to a local florist and picked out a bouquet of star lilies for her. I think it was a very fine thirtieth birthday. She opened presents and read cards. She drank good wine and knew that she was loved.
Is loved.
My tenses are as confused as my ability to locate myself in time was. I apologize.

After supper, we all went back to Jessie's house and there was cake. 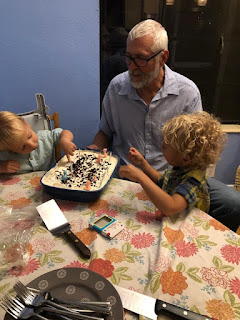 Levon helped with the decorating for the first time. He is growing up too fast. 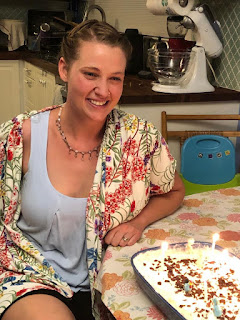 And there is the happy birthday girl, the birthday woman, about to make her wish and blow out the candles. Everyone liked the cake just fine, especially August whose daddy let him light the candles with a special safe lighter with special safe help. 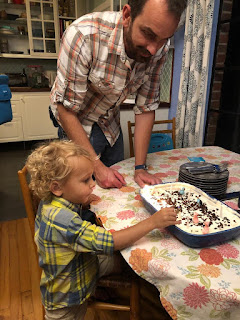 My grandchildren are all so lucky to have the papa's that they do. They don't know it but they are. I could not have possibly wished for better fathers for them, better husbands for my daughters. We are just the luckiest family.

And today?
I was more here, less dissociative. More firm in my foundation.
Lily picked me up and we drove to Monticello for the story hour and Jessie and the boys met us there. It was as fun as ever and today plenty of people showed up including Wiley Cash who, when he saw me said, "Grandma!" and came and hugged me.
I love that little guy.

While we were waiting for lunch after the library, Lily asked August if she could do his hair and he agreed that she could. 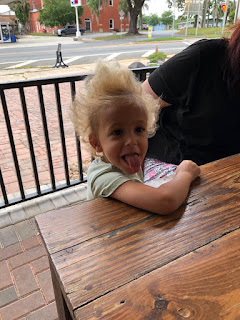 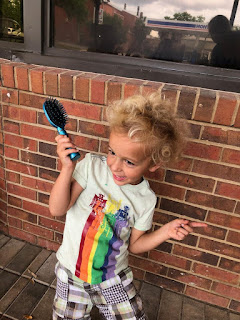 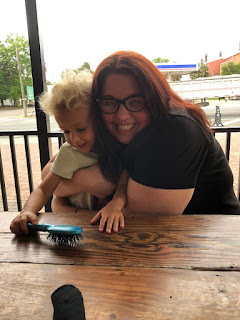 Where in the world does that hair come from? And where does Ms. Maggie's come from? Her other grandmother, I feel certain. She has ringlets that remind me of the ringlets that all of the saloon girls used to have on the Westerns that I watched as a child. It struck me today that we were supposed to believe that when those women weren't having sex for money with cowboys (never stated, only implied), they were doing each others' hair and arranging them in gorgeous locks tied up with silk ribbons while wearing scanty underwear. Fancy scanty underwear. And then having pillow fights. I guess.

Here she is, kissing her Levon goodbye. 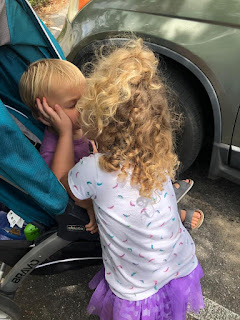 Tomorrow's Friday. I'll see you then.