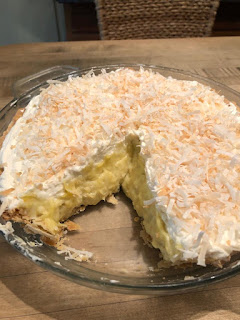 That's the coconut cream pie. Mr. Moon almost swooned when he ate a piece last night after the basketball game. And then he called me today from work and asked me to please bring him his pie. He said that without doubt it is the best coconut cream pie he ever ate.
It should be good. I made it with coconut milk and the half-and-half which was left over from when Lon and Lis were here. My kids love it when Lis has been here because they know that the half-and-half I bought for Lis to put in her coffee will be in the refrigerator.
I tried a bite of the pie and I have to say it IS damn good. I also put almond extract in it because almond extract makes everything better.
And now I have a blackberry and strawberry pie right out of the oven because I made way too much pastry yesterday and god knows you don't want to waste pastry.
Can you freeze a pie?
I probably should have frozen it before I baked it.

So that's the domestic and culinary news. 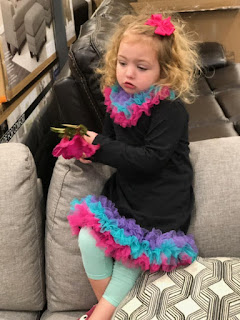 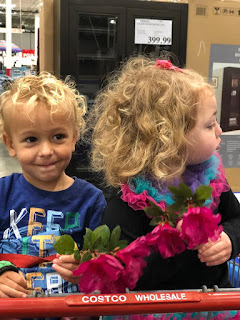 I met up with some cuties today at the Costco. Maggie brought us all azaleas. I could NOT get a decent picture of her though. She refused to smile.
Then we went to lunch. I embarrassed myself by demonstrating my flicking technique to August by launching a straw that had been tied into a knot into the seat behind him. There were two ladies sitting there.
"This is why we can't take our mother out," said Jessie.
I was laughing so hard that I could hardly apologize.
Sometimes being a grandmother is just the best.

Here's the picture I took before we all went our separate ways. Another curb shot. 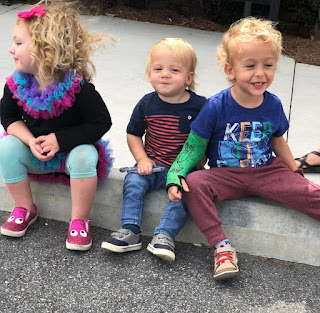 I told them, "Say POOP!" and as you can see, Levon actually did.

So that was all good but when I got home I took some things to the dump including the giant bag of VCR tapes and DVD's. I left them on the side of the trash bin along with a T-ball stand. This is where we, the citizens of Lloyd, place the things we think others might want.
"No scavenging," says the sign on the gate.
Haha.
So that was fine but when I was about to get in my car after putting my recycle stuff into their proper bins, the guy who works there started up a conversation about how STUPID people are. They put their trash in the wrong places and their recycles too. He's right. No one follows the instructions. So anyway, I stood there and commiserated with him and everything was fine but then he started going OFF and I knew I did not need to stand there and listen to his shit but he just wouldn't stop talking. He had to tell me what's wrong with kids today which is that their parents are afraid of them.
"I lived in FEAR of my father," he said, "But I respected him. Everyone feared my father but he was respected. And I threw my own sons up against the wall when they needed it. I wasn't afraid of them. They were afraid of me."
I should have just agreed and gotten back in my car but no, no, no. That is not who I am.
"Well, " I said, "I don't believe that children need to fear their parents in order to respect them."
And he proceeded to tell me how important fear is. Blah, blah, blah. He's probably extremely god-fearing too.
This led somehow to him telling me how great things had been in Jefferson county before integration. How everyone had respected everyone else and everyone got along just fine.
By now I knew I had to get away or I was going to explode but he just kept talking.
"I've lived in Jefferson County all my life and I was raised a conservative and I will be until I die!"
I could feel the anger building in me.
"I was raised in the south too," I told him, "But I was not raised to be a conservative."
Then he started up about Trump. How he's done more for this country than any other president in the history of the United States. And how Nancy Pelosi needs to get another shot of Botox. And how Obama was the one who fomented the divisiveness and hatred in this country.
That did it.
You know, it's weird. I knew that this man was ignorant and that honestly any man of his age who works at the dump is not going to be the happiest person in the world. And that his father probably fucked him up good but even as I was thinking of all of this he somehow came to represent everything I abhor and am horrified by in this country right now and I sort of wanted to smash him with something. Something heavy.
Fuck standing around and listening to this shit. I got in my car and said to him, "You, sir, are a racist, I think," I said.
"No ma'am!" he yelled. "I am NOT!"
Right.
I couldn't believe how shaken I was. I am a sixty-four year old woman who likes to think of herself as a compassionate and understanding woman who is far too old to get that angry. I wanted nothing more than to go back and scream at him about how ignorant he was, how wrong-headed, how maybe he should try watching something besides Fox News.
And you know why I didn't? Because I knew it wouldn't do one damn bit of good. One of us could have ended up with a stroke and it might have been me.

But shit. This guy works at the dump and, as he informed me, his family used to own four thousand acres of land here in Jefferson County so we can safely assume that he's come down in the world and he needs someone to blame that on.
I have to tell you though that I am not a very Zen person.

I got over it pretty quickly. And frankly, it's best if I take my trash to the dump when it's closed. There's a gate that stays open all the time and you just have to schlep it a little farther than you would have to if you can pull right up to the bins.
As you may recall, this is not the first altercation I've had with guys who work at the dump. Best for me just to avoid the whole situation.

I will end this whole confession of my un-Zen-ness with a poem that I read today.
Of course it was written by Billy Collins.