Well. That Was Something 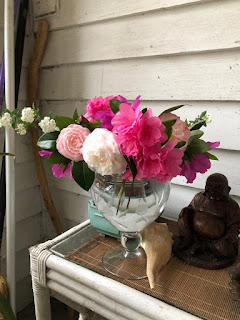 I spent seven hours today listening to the Michael Cohen testimony in front of the House Oversight Committee. I did everything today with my earphones in, listening via my local NPR station on my phone.
Wow.
I'm not going to recap anything because there are at least a million news outlets that are doing it better than I could but it's so telling to me that not one Republican asked him a damn thing about Trump but instead just kept trying to attack Cohen's credibility by reminding him that he lied when testifying before the Congress previously which he did not deny for a second.
Basically he just kept saying, "Yes, I lied and I'm going to prison for three years because of it."
What I want to know is, if he's the pathological liar they claim he is (and he may well be) then why do they believe what he said when he was defending Trump?
But I digress.
I thought that Representative Elijah Cummings who is head of the Oversight Committee did a fantastic job of keeping things going smoothly and making sure that the whole thing was conducted properly and his summation at the end almost brought me to tears.
Of course everything Cohen said about his former boss was exactly what we've always known about Trump. That he's a liar, a conman, a cheat, a racist, etc. Also that he has a huge ego, it's all about winning at any cost, and his kids (with the exception of Tiffany and Barron) are also guilty of criminal behavior.
And so much more.
Well, it's a start. And I have to tell you that I was absolutely intent on hearing it all. This is history happening. And of course Trump's supporters are going to completely disregard anything that Cohen said today and even if they don't, it won't matter to them. As Cohen said today, Trump was absolutely correct when he claimed that he could shoot someone in the middle of fifth avenue and get away with it. 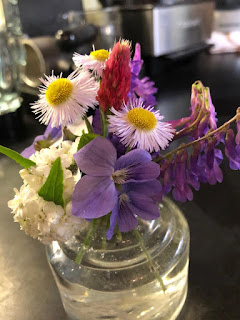 Those are the pretty little flowers I picked on my walk today. The flowers at the top all came from my yard. It's always crazy-good when the camellias and azaleas are blooming at the same time. The wisteria will be coming along soon. I've already seen some blooming in other places nearby. And the wild azalea is blooming in the woods and I always feel blessed when I see those pink blossoms peeking out from behind the forest trees.

These are the good things. Also, this. 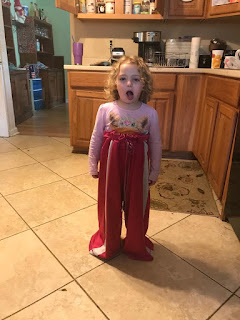 Magnolia in her mother's work-out pants.

And August newly relieved of his cast. 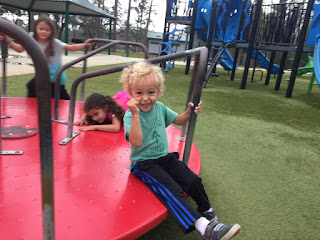 Yay, arm!
Jessie wrote last night that she'd asked August what his favorite part of the day had been.
"Seeing Maggie," he said. She asked him what he liked about seeing Maggie and he smiled and giggled and said, "She's sweet."
He also said that when he's older he's going to marry me and Boppy.
Oh, how I love three-year olds. They are just starting to figure it all out and their hearts are so precious.

What a day. I better go shut up the chickens. Only about half of them are sleeping in the hen house these days. The rest are sleeping on the roof of it or in trees. Miss Viv has now disappeared too. I keep thinking that both she and Vera are sitting on eggs somewhere but if they are I have seen no sign of them and even brooding hens get off the nest for a few minutes every day to eat and drink some water and maybe take a little dirt bath. I feel like my little chicken world is all upset right now due to having all of these roosters. We have GOT to do something about that and I still don't really know what or how. Have you ever tried to catch a chicken? Plus, we can't even corral them in the coop because they don't go in there.
Oh, Lord.

Let's all hang in there, people. Justice may be served eventually. Meanwhile, our so-called president is finally in Viet Nam, bone spurs and all, meeting with one of his bromances and god only knows how he'll fuck that shit up.
I can only say that I hope justice comes before the fucker manages to start WW III and that when it does come (justice, not the war), there will be some nice tight handcuffs served on the side.
A girl can dream, right?