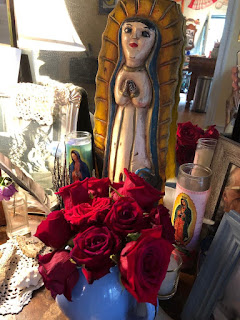 So for Valentine's Day my sweetheart brought me some red roses, long-stemmed as any Hollywood Pin-Up girl and although they are definitely on their way out, they're not done yet. So today I cut the stems dramatically and put them in that old teapot of my grandmother's and if you want to know the truth (don't tell Mr. Moon) I think they are more beautiful like this- slightly blown and blowsy, past their prime but soft and sweet and red as the blood in an old woman's heart.

Okay. Speaking of Hollywood. I probably won't watch the Oscars but I did see a picture from the red carpet that knocked me out. 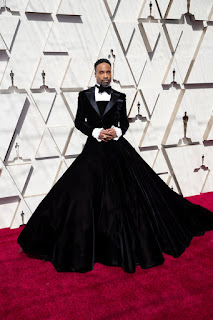 I do not know who this man is. I see that his name is Billy Porter and he's an actor and so forth but DAMN! He wins. Everyone else can go home because he wins. If that ain't the best red carpet look for a man I've ever seen my name isn't Mary Moon. The designer was Christian Siriano whom I remember from Project Runway which I used to love. And I definitely remember Christian because he was awesome and he almost never freaked out but was calm and collected and just came up with one beautiful design after another and then made them and he always knocked it out of the park.
He made it work.
And boy, did he make it work with that one. I'll have to show that picture to August.
I love it!

So. I wish I could remember exactly what book by Bailey White it was in, but there's a quote that I really want to share and I can't, for the life of me find it. But I feel certain that Bailey White is the author. If you've never read any of her books, especially the her essay books, you're missing out. She's an American treasure. Anyway, the quote I'm trying to remember goes something like, "Move around the doilies on an end table and next thing you know you're putting up crown molding."
That's not it, I'm sure, but you get the gist.
And it was like that around here today with the putting in of new furniture.
The table in the library didn't much change anything except to give me a place to put books but for some reason, I ended up cleaning the stuff on the mantel in there and dammit, I should have just thrown most of the stuff out and gotten on with my life but no, I kept most of it and cleaned all the tchotchkes and wiped down the pictures and put everything back. Now frankly, no one in the entire world would ever notice the difference and this is what I hate about housework. I could spend a week on my knees (theoretically) cleaning the baseboards in this house and it would make less difference in the universe than a gnat getting slapped to death by a fisherman. It just doesn't matter!
But now and then you gotta pretend you care.
Am I right?
Well, probably not.
But I did that and then I cleaned and polished my new little table, which, by the way, is almost exactly what I had envisioned finding for that room. I mean, down to the color of the wood. And then I cleaned a wooden rocking chair in that room that hasn't been cleaned in oh, probably four thousand years.
And had to sweep, of course.
But when Mr. Moon replaced what his TV had been on with the new thing, that really caused an upset because we had to find a place to put the old piece of furniture. Which, by the way, had a huge drawer full of old VHS tapes and another small drawer full of DVD's.
We have neither sort of player.
So I put all of the VHS tapes except for the ones that are labeled as home movies and some of the DVD's as well into a big plastic bag. And that felt good.
And then we moved that to our bedroom underneath my purse rack and I would show you a picture but I'm too fucking embarrassed for you to see how many purses I have. Of course, some of these purses are thirty years old but it's still embarrassing. I'm not talking about hundreds here, but still way too many.
But before we could put that old oak dresser in its new place we had to put the cheap-ass Target faux wood cabinet which I think Lily put together when she was about twelve years old although it could have been Jessie, that was sitting in that space somewhere else. I think eventually it's going away but for now, it's holding sheets and is in a place where a chair used to be but the chair is in another place where two children's chairs used to be and no one ever sat in those chairs and they're falling apart so they're on the back porch now.
Get it?
And tomorrow we'll start putting up crown molding and changing the doilies.
The good news is that in the process we have decided to take several things to the dump including the huge bag of the VHS tapes and DVD's.
Slowly, slowly we make progress.
And I also cleaned and polished some other wood furniture (not all of it, oh god, not all of it) and did a lot of sweeping.

This sounds like a lot but honestly, it wasn't. While I was drifting about cleaning random things Mr. Moon was out cutting bamboo so that the guy who is coming to take out the giant oak that fell back last fall can get his truck into position to also remove a dead cherry laurel which is only standing because it has so many wisteria vines holding it up. Cutting the bamboo and then loading it onto his truck and taking it to the burn pile. I have no idea how many trips he made but every one of them made me feel guilty because I was essentially doing nothing.
That's life.

I've done a little research on my lamp and I can't really figure out much about it except that I'm pretty sure it is indeed an Italian Campodimonte lamp. I doubt seriously anyone would go to that much trouble to fake it because it ain't worth THAT much. I won't be selling it and buying the Porsche I've always wanted. But it does make me appreciate it even more than I did and believe it or not, I've actually now realized that the little feet on it are dolphins which I never noticed before. 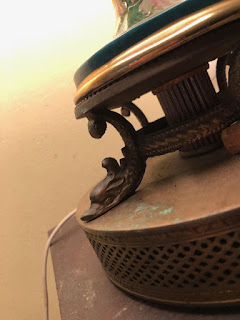 Here's a picture of some of the chickens that I took when I went out to pick our salad greens. 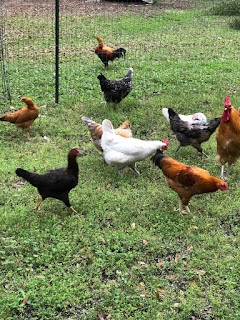 Most of them are in the garden, grazing in the grass.
It's a gas.
Can you dig it?