The News From Here 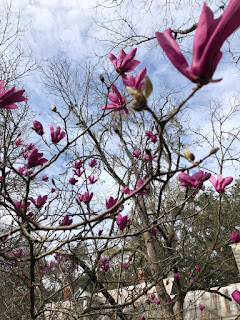 Well, it was about the sweetest Valentine's ever. We had such fun last night. Lon and Lis played with their from-way-back-in-the-day friend and fellow musician, Rick Kuncicky, at a very small but huge in the heart place called The Blue Tavern. Opened and run by musicians it's one of those special venues where you immediately feel at home and when Lon and Lis play in Tallahassee, it is like going to see family in a lot of ways. They and Rick were raised here and the sort of allegiance they get is never-ending so you always see the same people who gather to enjoy it all. We grow older but no less enthusiastic in our love for the music and the people who make it.
Rick is an amazing fingerpicking guitar player. Close your eyes and you might think you're listening to Les Paul. And I've known him for approximately forever and remember when he and his then-wife and his brother and his then-wife played in a band called Michelangelo a million years ago and I'd pay damn good money to hear them play once again. They were fabulous.
Rick's nephew was there last night and I remember the night he was born. He's heard the story more than once from a lot of different people because he was born during a music festival (although in the hospital, not at the festival) and I remember hearing that he'd arrived when I was at Smitty's Club which I have written about before. There was great jubilation to hear that he'd been born. That was the summer that every hippie woman I knew was pregnant and we all gave birth within weeks of each other. We were all so young and filled with life and brave and drunk on the joy of bringing that life into being, carrying our bellies proudly under our hippie Made In India dresses; we were goddesses all.
And this boy was one of those babies as was Hank.
In fact, he came up to me during a break and said, "I just want you to know that Hank is one of the biggest inspirations in my life."
"Mine, too," I said.
There was a family there, a man, a wife, and their daughter, and Lis had gone to high school with the wife and they've been friends since then. The daughter was differently abled, I guess you'd say and that is actually a descriptive phrase that I love although aren't we all differently abled? But she was so obviously adored by her mama and her daddy and she held on to them and talked to them and kissed them and before they left, she danced with her father, holding on to him with all of the love that any father would wish from his daughter and just seeing her safe there, in his arms, was almost more than I could bear. After the song was over, they took their leave and since they were sitting right in front of the stage, the girl reached out to Lis and told her she loved her and Lis said, "Come give me a hug," and the girl did and Lis said, "I love you, too."
The entire room was silent for a moment while we all struggled to get ourselves back together.
So it was like that.

When Lon and Lis arrived yesterday afternoon, Jessie was here with August and Levon. Lon and Lis are Jessie's fairy godfather and godmother and theirs is a life-long mutual love affair. August immediately glommed on to Lis and had her helping him with a puzzle in the library before we'd hardly said hello. Levon was shy but poked his head up from my arms or his mama's to ponder these strangers.
August is sporting a cast right now and no, nothing is broken. 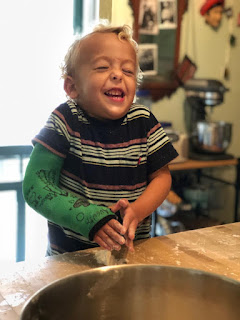 I haven't written about it because Jessie feels terrible but the reason August is wearing the cast is that last weekend in the bathtub, August was kicking his brother and when Jessie told him to stop, he wouldn't (our perfect August? WHAT?) and she grabbed him up and in doing so, he got what is referred to as "nursemaid's elbow" which is a sort of elbow dislocation and it's very, very common. Not serious at all but she was devastated because he cried and wouldn't move his arm and quite frankly, Jessie has suffered from guilt a thousand times more than August has suffered from pain. He's been to three different doctors and the final one, at an orthopedic clinic, decided that he'd cast the arm for two weeks just to let it heal but I think that if Jessie didn't have insurance they would have done nothing.
But. That's just my thinking. 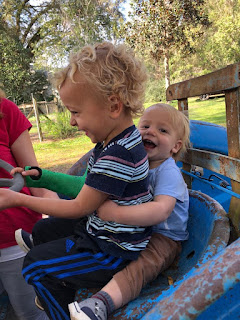 I believe he'll live.
Meanwhile, he's hurtling through life basically one-armed as if that arm in the cast had been merely a luxurious and unnecessary appendage. He was helping me make bread in the first picture of him and was driving the tractor (don't worry, it's not running) in the second picture which also thrilled Levon.

We didn't get home from the Blue Tavern last night until after midnight at which point I was way too old and tired for a martini but we managed to stay awake long enough to all enjoy a piece of the berry pavlova which I'd made and damn, I wish I had a picture. That stuff was GOOD! And pretty.

This morning Mr. Moon had to go to work and so he was up and out fairly early and I didn't sleep too long and I made breakfast for the three of us who didn't have to get to a job and we sat around and enjoyed that, drinking coffee and chatting for a good long while before they had to pack up and leave. They're playing in Apalachicola tonight and Destin the night after that. They're calling it the Tri-County tour and it is.
I just love those people so much. As I've said before, they know me as well as almost anyone on earth and despite that, they love me still. When they leave it's a true Southern good-bye which can last almost as long as the visit in some cases. There are hugs, there are kisses, there are OH! I-wanted-to-tell-you's! There are more hugs and kisses. There are thanks-for-coming's and there are see-you-soon's and there are don't-leave's!
And finally they do leave and there are shouts of I-love-you's!
I dry my eyes and walk back into the house and give thanks for such friends.

So that's how it's been.
I've stayed close to home all day.
Here. Lily sent me this picture. 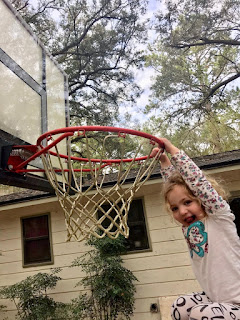 And here's one more picture of Levon. 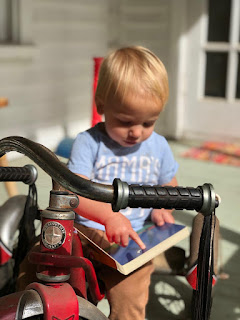 He loves that book.

And the native Buckeye I planted. 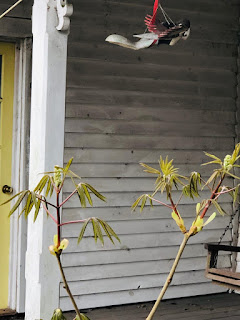 It's about to put on its tender spring bloom.

Lord, we need to pressure wash this house. Let's not even discuss painting it.
Sigh.

We go on with love and with music, with food and with friends, with family and with sleep.
We go on.