A Lovely Hen And More 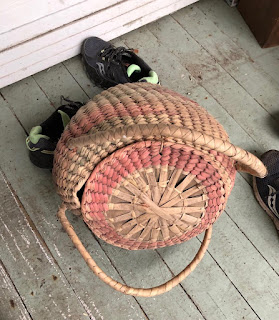 See that basket? I probably got it a thrift store because I love baskets. And bowls. And leather bags. I believe it's a womb thing. Anyway, that basket has been sitting there for some time because Dearie, in her struggles to lay eggs in the bag of shallots on the nearby wicker table where it sat, knocked it off and I never put it back on the table. Dearie has been quite upset since I replaced the bag the shallots were in with a paper bag because she can't figure out how to get in it and lay.
Yes, I did make the no-more-chickens-on-the-porch rule because of the poop and I blocked off their entranceway but Dearie quickly figured out how to just come in the cat door being undeterred by the flap in it. She's a smart hen.
So she's been coming on the porch and just rustling about and sitting on a chair and staring at me and so forth and today I heard her making some sort of noise behind me as I sat on the porch and I turned around but couldn't see her. The sound appeared to be coming from the basket though. Whose lid, as you can see, is closed. Was closed.
I walked over, crouched down and slowly lifted the lid. 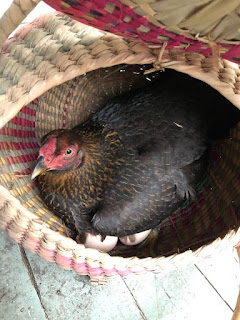 She was completely unperturbed. I let the lid fall back down and left her to her business. I could see that there was more than one egg in there and after she hopped out of the basket and left the porch I found these. 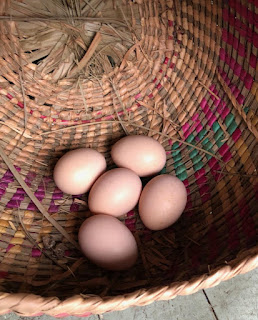 I also found two more eggs on the front porch today in the same potted fern I found those half dozen yesterday. Crazy chickens!

This afternoon, Mr. Moon and I met up at the mounds with Hank and Rachel and Jessie and Vergil and August and Levon. And guess what? August was wearing his dress. 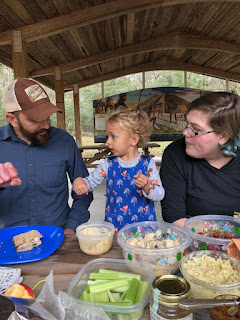 Here he is, explaining something with many hand and arm movements to his daddy and Rachel. 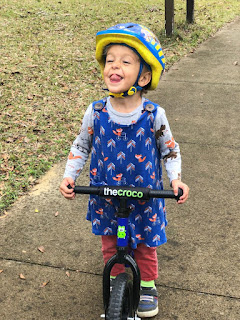 And on his bike.

Here's Levon on his. 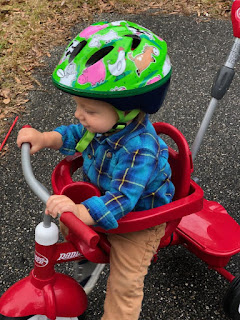 Actually, it's a trike.

Between all the food that Jessie and Vergil and I packed and the FEAST that Rachel had packed, we dined like royalty. There was chicken salad and hummus and tuna-egg salad and crackers and celery and fig and orange preserves and cheese and pickles and oh, I don't even know.
A fine picnic, indeed. 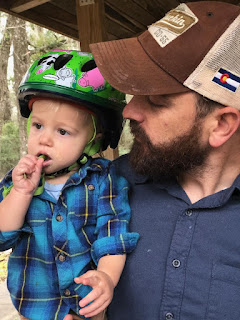 After that the Weatherfords and the Moons came back to the house of Mer and Bop where Vergil and Glen cut a tiny bit of the oak tree that fell in our yard for firewood. Yes, that tree is still there but it is scheduled to be removed early next month. I've gotten quite used to it being there.

August has told his mother that I need to make him another dress, like Maggie's, and that Levon needs a dress too so I took August's measurements today and we looked at fabric. I think I'm going to go back to Joanne's to see if they have any more of the bug flannel. I don't think I'll make Levon a dress until he asks for one.
We read some books and Levon and I played peek-a-boo and did some pretend sneezing which makes him laugh. And then the men were done and off the little family drove with a truckload of oak.
The Super Bowl is on and a neighbor is here to watch it.
And yes, I have already made (and eaten) Velveeta dip. I didn't eat all of it. Let me make that clear.
Lord have mercy, that stuff tastes better than anything should be allowed to taste. I would eagerly and happily eat it with a spoon and call it spicy cheese soup.
Now THERE'S a thought...

All right, dear ones. I'm going to go prepare some manly food.
It's always about the food, isn't it?