If You Feel Love, Show Love. That's All 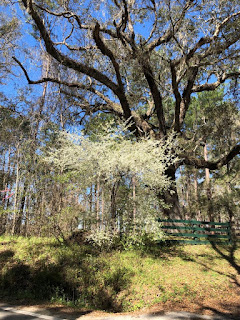 It got a little cooler last night and I enjoyed every second of it. Every time I woke up I snuggled down deeper into the duck and sighed and fell back asleep. And today has been nothing short of glorious. It did get up into the seventies but the humidity was low and the sky was that blue you see in the picture and things are blooming and birds are singing and butterflies are darting about and bees are buzzing from one flower to the next and it's been pretty perfect.

I took a walk down White House road this morning and as always, I never, ever regret getting out and walking. Well, except for that time I got caught in a storm and oh, yeah, that other time that my thighs got so chapped that the last three miles felt like I had razor blades implanted in them but, mostly.

I dropped by Jessie's house when I went into town to go to Publix. August was his usual cool self. "Hey. Can you read me this book? Can I have some gum?"
I was kissing him on the ear a little later, just tiny little peck-kisses and he said, "That's enough of that for now."
Three years old.
Levon was happy to see me though.
"Hi!" he said and he let me pick him up and give him a cuddle and a squeeze and a few kisses before he wanted to get down to play. He did listen some to the book we were reading though and pointed out the horse in each picture. He's smart, that child. 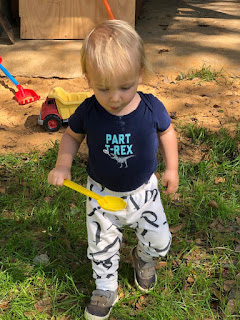 And oh, how he loves to dig in the dirt.

I didn't stay long at all but left and went to the grocery store, came home and started supper early because Mr. Moon has a basketball game in town at seven. I also made pie pastry because I've been promising him a coconut cream pie for forever and the crust is baking now and I'm going to make the custard in a little while.
It will make him so happy.
I learned a long time ago that, like with taking walks, I never regret doing anything that makes my husband happy. When I show love to him, he shows it right back to me and the more love there is, the more love there is.

Those Beatles. They knew.

Of course, I'm lucky enough to have a partner who returns love with love. Not everyone is that fortunate and I know it.

I just took the pie crust out of the oven. It is so imperfect.
As am I. But hopefully the custard and whipped cream and toasted coconut will compensate. Sweetness generally does.

All right. As August might say, "That's enough of that for now."