A Mess Can Be A Very Good Thing 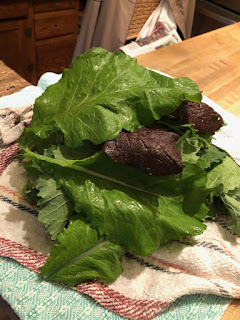 So, yes. I'm cooking a messa greens tonight. And baking a chicken. And I'm going to try the recipe to be found HERE for roasted yams. I only have sweet potatoes but honestly, I don't know the damn difference. IS there a difference? I am so enjoying my subscription to NYT's cooking. It has given me much inspiration and I am slowly adding recipes to "my" recipe box which is nice because it's a way to remember what I've cooked.

I've felt so much better today. When I woke up I thought I'd be spending the day in bed but slowly I came to life and actually did a little yard work. I trimmed a few roses although I have no idea what I'm doing when I trim roses. I don't even know when you're supposed to trim roses but this is Florida and things are sometimes forgiving of clumsy gardeners. When we moved to this piece of property there was a scraggly white rose growing in the back yard and the then-owner told me that no matter what I did to it, it would not die.
He was right.
Eventually, Mr. Moon moved it because it was in the way when he needed to pull the truck into that area of the yard and it has thrived in its new home by the garden. I cut it back hard today and mulched it with chicken house hay, which is to say, hay that has chicken shit in it. This will serve several purposes. Mulching, yes, and the poop for fertilizer, and the chickens will scratch around in it because that's what they do and will poop more and also loosen up the dirt around the rose.
Chickens can either be a gardener's best friend or their worst enemy, depending. Sometimes both. I will never be able to have pansies AND chickens at the same time because chickens love to eat the blooms. This makes me sad but not sad enough to get rid of my chickens.
Do you remember that I told you that Dearie had figured out how to flap up to the bird feeder to eat her fill of seeds? Well, now all of the chickens are doing it. Between the squirrels and the chickens, the cardinals and finches and so forth are left with little chance of getting anything to eat.
Such is life.
I also did a little weed-pulling and trimming in the front yard. Not much, but some.
And then I came in and ironed and no, that's not very exciting but I did find a new Netflix guilty pleasure to iron by which is "Dating Around." It's a short little Netflix original series. I'd not watched any of it because it looked like it would appeal mostly to the young folks, as they say, but I tried it today and got hooked. Yes, it's a dating show, blah, blah, blah but it's a little different and the people on it who go on these dates are quite varied. There are the usual young and beautiful straight people and there are gay people and there are older people and I like that. I think I've seen all of the episodes but one now and my favorite so far has indeed been the one with the older people. I say "older" because they were about my age and let's face it- I am older.
Older people don't have time for bullshit.
But hopefully, they do have time for love.

So now Mr. Moon has a least a week and a half's worth of crisp, ironed shirts to wear to work and that makes me feel good. Speaking of being older- there was a time in my life when I refused to iron. Just was not going to do it. It's not that I hated it so much it's just that I had some very unhappy associations with ironing but more to the point- why should I have to iron what he wore to work? And that's a valid point.
Now though, the kids are grown and so that part of my working life is over and yet he still goes to an office and it makes him feel loved and cared for when he puts those shirts on in the early morning. Plus, I just like to see his handsome self in them and as I have said before, ironing gives me a fine excuse to watch TV in the middle of the day.
It's a win-win for both of us, I think, that I would not have been able to experience as a crazy-busy younger woman with the responsibilities of children and part-time work and a house to keep up and meals to cook and the endless and never-ceasing chores of that part of my life when every moment that I was not obligated to spend on one of those things I hoarded and used for myself. I needed those moments as does every mother but things are different now.
And thus, I iron.

I just went into the kitchen to see this. 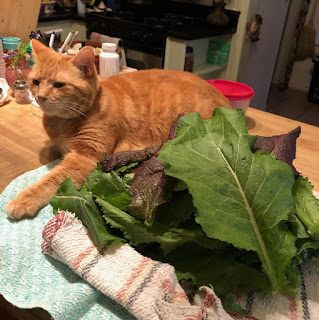 She is guarding the greens. Maurice is a good cat, despite her frequent use of claws and teeth.
I suppose I better go cook them.
The greens, I mean.
Just wanted to make that clear.