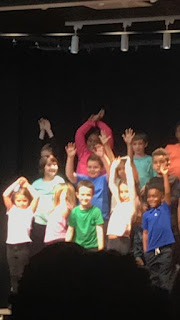 Another busy day. Went to town and ran some errands, saw August and Levon, read August some books. Came home and finished up a few chores I had here and then Mr. Moon and I went to see Gibson's first grade musical presentation.
It was pretty awesome. The theme was animals. Always a popular subject. Gibson is the opposite of how Owen always is in these situations who looks like he'd rather be anywhere in the world but on the stage. It's painful to watch him. But Gibson gets into it with all the joy that little guy has in him. He sings and sways and does hand movements and and smiles and just enjoys himself tremendously.
So we did that.
And then we rushed over to another school where Owen had a basketball game. 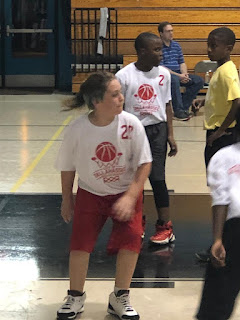 And that was pretty exciting and it was fun to watch my big guy play basketball.
His team lost but no one seemed too upset about it.

And honestly, that's it for my exciting news today. It was a little out of the ordinary to find a trollish comment on my last post. I swear- I think that's the first troll comment I've ever gotten unless you count spam. And even this one wasn't too personal as it was mostly directed towards all of the Baby Boomers whom she (he?) wishes would just drop dead.
We're working on it, honey. It'll happen.