Sometimes Doing Your Best Can Be Time Consuming 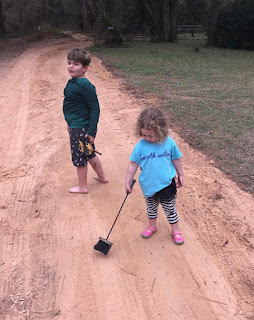 It would appear that Ms. Magnolia June has a new hobby. Or project. Either way, this could take a while. I doubt she is much daunted by the challenge.

I don't think I've felt as well today as I did yesterday. First, I slept too late if that's even possible, and had weird dreams. A different house was involved in these dreams but it was like all of the other house dreams in that it needed tons of work and cleaning and there were a multitude of people staying there who needed food and a place to sleep. We were buying this house and I kept saying, "But the seller has to take care of all of this."
Somehow that was not true.
Exhausting.
Then, I picked up some Kleenex by the bed (as soon as I lay down at night my nose begins to run) to throw away and was stung by a wasp who was hiding in them. WHERE ARE THESE WASPS COMING FROM? There are not hundreds of them but almost every day we see one, looking stunned and maybe trying to fly or maybe not. They don't even all seem to be the same sort of wasp. WTF?

These things did not bode well for my day but honestly, the day went fine. I had to go to town to shop at Costco and Publix and for some reason that took me hours. No. Seriously. Literally hours. One reason was that every decision I had to make seemed to loom inordinately large. I had a list and I got everything on it, eventually, but it all just seemed so overwhelming. I almost bought a giant bag of limes at Costco that cost $5.99 because limes at Publix cost two for a dollar but then I thought about how I'd never use up all of the limes in the Costco bag and if I spent six dollars at Publix on limes I'd get twelve of them and that was more than I could use too and so I'd just get a few at Publix.
Does that make sense to you?
The bag of limes went in the cart and then came back out as I did this tortured reasoning.
And then at Publix there's the whole new arrangement thing and I did okay there but once again- which of the ten gazillion brands of canned tomatoes do I want? Same with cough syrup but that also included deciding exactly what sort of cough syrup concoction I needed.
With Dextromethorphan or without? Definitely night time, right? Because I don't really need it during the day. But what makes it night time? Oh yeah, Benadryl. How many drugs can you pack into one cherry-flavored liquid? And speaking of...sugar free cough syrup? It already tastes like shit so wouldn't sugar free be even worse? I think I'm more wary of sugar substitutes than I am of Dextromethorphan.
So that took awhile.
And then of course there's always the meal planning one does while in the store unless one has the forethought to do it beforehand. I knew what we were going to have tonight so that was fine but then I decided that I'd make egg rolls tomorrow and what all do you need for egg rolls?
Wrappers. Cabbage. Broccoli slaw. Green onions. Tofu. What else? Bean sprouts, water chestnuts? Sure.
Do I have sweet and sour dipping sauce?
Probably but better get some anyway, just in case.
This is why I end up with eight bottles of sweet and sour dipping sauce in my cabinet.
Or none.
Could go either way.

When I checked out (finally) the checker asked me, "So, what are your plans for the rest of the afternoon?"
It was three o'clock.
"Go home, unload all this stuff, put it away, finish the laundry, make supper, eat it, go to bed."
At least I had that all figured out.

I've got my smallest casserole dish filled with chicken enchiladas, ready to bake. I'm so proud. I only made eight of them, not thirty-two as per usual. I'm really trying hard not to make so much food. Leftovers are good but there is a limit to how much of them two people can eat. 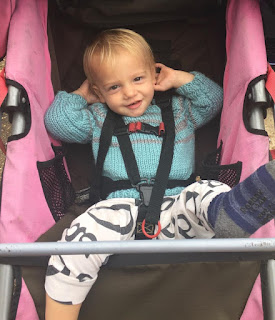 As I said to Jessie in a text after she sent me the picture, all he needs is a beer in the cup holder and I'm sure he'd be saying, "Yeah, think I'll kick back and watch a little wrestling now."
I hear that things are going better over at Jessie's. At one point, on Saturday, August had the cold with a fever, the puke-bug he'd gotten from Levon and also, the dislocated elbow. Levon had recovered from the puke virus but was getting the cold.
At least we haven't gotten the stomach thing here.
Yet.
Knock wood.

I saw red clover blooming today. This means that spring is barreling down the highway whether I'm ready for it or not. I am a stubborn woman, though, and still have the duck on the bed and dammit, I refuse to take it off until it's March.
Probably.