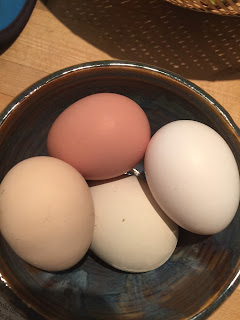 Four eggs I found today, three in the pump house and the newest one, the maiden egg of a young hen, was laid in the actual hen house in a nest. It's that deep rich brown one at the top there and I could not be more proud if I had laid it myself.
Thank you, babies, I want to say to all of them. Thank you.

Sometimes I wonder why it is that such simple, prosaic things seem to be such deeply satisfying miracles to me. I was thinking about this today and it occurred to me that this may be the result of the sexual abuse I survived as a child. The effects of having been abused are myriad and uncountable in numbers. As I discovered when I went into therapy with the woman who saved my life and whatever sanity I may have, it's like an onion with an infinite number of layers, trying to get through and to the core of the ways the abuse affected me then and how all of that led to coping mechanisms and beliefs and reactions and actions and on and on and on which have made my life what it is.
The good and the bad. Both.
It is absolutely true that I am not the person I would have been had I had a decent childhood, free of fear and confusion and betrayal and mental illness. Of course none of us had a perfect childhood and there are people who have managed to not only survive but go on to become amazingly well-balanced and sane and functional human beings who suffered what all of us would agree was the most egregious and cruel and horrendous abuse as children.
And of course, many have grown up to barely function in this world and some develop such unhealthy coping mechanisms and mental illness that they cannot function in this world at all.
Like the very process of trying to get to the heart of it all, the resulting consequences are as varied and many as that other onion, although there are certainly many of us who share the same problems and yes, strengths. I remember when I started going to a sexual abuse survivors group and began to listen to others who had been through what I had been through and I realized that instead of being the unique person I thought I was, I was one of many who shared so much.
Our stories were all different and yet, all so similar.

And how does this relate to my appreciation and sense of wonder at things like a chicken laying an egg or the dirt and a seed resulting in food for my table?
I think it may be because one of the things which was stolen from me in my childhood was the trust in anything I could not see or touch or feel.
Someone who says they love you may, in fact, be the very person who is systematically and surely using those words in order to gain your trust and your silence. And with that terrifying knowledge comes an inability to believe in any person of authority along with a deep fear of those who are more powerful than you, no matter what they say.
Religious leaders for instance, who represent the Big and Ultimate Authority. And that Ultimate Authority itself.

This is true for me at least, and thus, don't even try to talk to me about a big daddy who loves me and wants me to love him and who died for me. I ain't got time for that shit. No one in the history of the universe has died and come back to say any religion is true.

Eggs and dirt and seeds and love and light and babies and art and oceans and solar systems and space are actual and real things I can see and feel with my own senses and my own heart and my own soul and we humans do need something which is spiritual and beyond us and more eternal than we are.

I am also thinking it might be time for me to talk more about childhood sexual abuse. Not only for myself but for the many who come here who also experienced that particular sort of hell. Perhaps I need to open that closet once more and let the light touch things I have not been brave enough or tough enough or even aware enough to admit are there.

I will ponder this and let me also say that this is a safe place for anyone who wants to talk about their own experiences. Obviously.

Meanwhile, there will still be news of grandchildren and chickens, weather and other everyday wonders.
You can count on that.