What a completely odd day.
For about eight months I have woken up every morning knowing that I should go get my blood drawn for the regular bloodwork that my doctor wanted me to get back when I first started seeing him. Just the regular work-up, you know. And I've been to see him twice since then and still hadn't done it and I have another appointment with him next Friday and I suppose my brain just finally kicked in and made me do it because this morning I woke up from a dream where I had gotten the blood drawn and felt so relieved that I got up, got dressed, let the chickens out, and drove to town.
Where I got my blood drawn.
Jesus Christ.
Now he's going to know all of my secrets, my blood secrets, and he's going to want me to go on other drugs for high cholesterol and shit like that. I just know it.
And I can't stand that thought. Mostly the secrets part. Not that I have like a hidden addiction to heroin or anything but somehow, the idea of anyone being able to access the information given up so treacherously by my very own blood makes me want to die.
This is probably related somehow to my history of sexual abuse- if there is any one thing which I can keep private and away from anyone who could harm me, it is the very essence of my physical being which is that red, salty soup of my veins.
Honestly, I would rather get five pap and pelvics than one blood test.
This makes no sense but then again, there is nothing which makes sense about the fall-out from childhood abuse if viewed from the lens of the "normal."
BUT, fuck it, I did it. I went and got vials and vials taken from my arm and even had extra blood drawn for hormone levels which I was also supposed to get done months and months ago.
And then I went and got a stupid, horrible, junky egg and cheese and bacon biscuit from the Burger King and went to Lily's and we all went to Costco. We went earlier than usual which sucked because there were NO SAMPLES!
Gibson couldn't even believe it. It is not a part of his reality for there to be no samples at Costco.
He kept insisting that there had to be samples, there simply had to be.
There were none, not even a sample of yogurt or a protein drink or anything at all.
So we got them pizza. 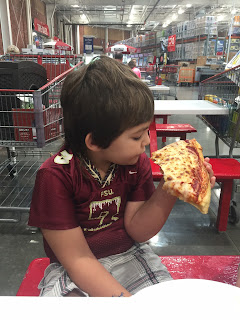 And Gibson was happy.

I came home and slept. Between the anxiety hangover and the draining of my bloodstream I just didn't have any energy. And then I got up and picked some beans from the garden and that's been it.

I keep thinking about how, the day after the election, I said to my husband, "Well, that's the end of the world as we know it," and I meant it and I also kept saying, "We are fucked, we are so fucked," and I meant that too and every day that passes proves that I was as right as I could be and here we are, every day a new blow to the gut by this absolutely insane mad man and today it's his proclamation-by-Tweet that all transgendered people will be kicked out of the military.
Look- I want to live in a world where there is NO military. I want those swords beaten into plowshares yesterfuckingday but that hasn't happened and by god, there are plenty of people for whom military service is their only chance at a better life and to summarily announce to thousands of people that their service is no longer acceptable in any capacity is...well, I don't have the words for what I think it is. 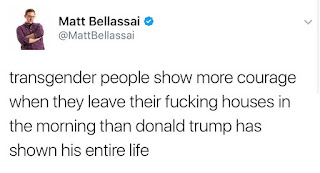 And he is fucking right.

I want to cry, I want to scream, I want to beat on something until my knuckles are bloody. I want to cradle all of my transgendered loves in my arms and say, "It's going to be all right."
But you know what? I don't even know if I believe that.

Here he was five years ago with Lady Gaga.


We could all use some fucking shelter.