A Day Of Mostly Rest 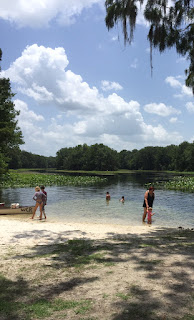 The river was all we had hoped it would be. There were a lot of kids there but nothing untoward was going on, perhaps because a sheriff was there in his big sheriff car enforcing the no alcohol, no dogs rules. Friends of Owen's from school showed up and there were plenty of people for him to play with and Maggie liked the water although it felt as cold as could be and delicious and it's so hot that we sat in it on our knees, up to the chest, and felt our core temperatures drop to a normal degree. Hank showed up with a friend of his and we visited and all said the same thing over and over which was, "Do you see Owen?" or "Do you see Gibson?"
So many little boys with brown hair and bathing suits alike, all moving like Bingo Balls at the church on Bingo night, running and chasing and jumping and swimming.
We never did lose a boy and Maggie stayed close to us, mostly clinging to her mama as she was in a mama-mood today. Again she pushed on my shoulder as I sat in my chair and said, "Up, up," to get me to let her take my place but I said, "Nah, you come sit in my lap," and she did and fed me bites of her rice cake and her peanut butter sandwich, her little tummy poking out of her pink bathing costume, her plump little legs and fanny in my lap feeling like the thing I most should have been holding at that moment in time in all of this whole world.

I did manage to clean out the hen house nests when I got home. I was wearing a pink linen dress I got at the Goodwill and a pair of black nitrile gloves that say ACE on them and I was glad no one but the chickens and cats could see me. It's too damn hot to wear overalls, and I made quick work of it and dumped the poopy hay in the garden where it's composting and will become mulch and fertilizer. Dottie is still on her nest and Trixie was right beside her. Here's a picture I took this morning of Joe Cocker and Little Richard and Tronky. 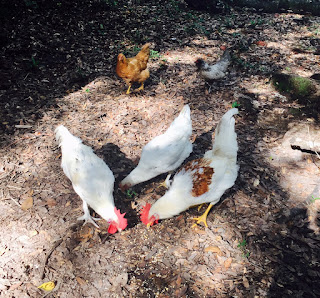 That's Nora and Violet in the back. Little Richard is actually becoming a very handsome rooster himself and is beginning to crow. So far all the roosters are behaving themselves and I am glad of that. It may just be too damn hot for them to worry about anything beyond eating and drinking water and taking dirt baths in the shade of the yard.

And this is summer in Florida. You go to the river and swim if you're lucky enough to have one nearby and you keep watch on the wild boys and you sit in the shade of the moss-draped cypress tree and you watch the birds and the sky and some days that's about all you can do.

We saw a limpkin today feeding in the water lilies and were amazed because they have all but disappeared due to the fact that their main food source, the apple snails, have almost disappeared because of invasive species. It was a beautiful sight and we were there to see it.

Blessing of wondrous and watery kinds.