A Day In The (Tiny) Life

I have been a fucking DO-MESTIC goddess today.
Well, in my world. And trust me- the bar is set pretty low.
And like I said, I did not move very fast but I did keep moving.
Hen house- cleaned!
Kitchen floor- mopped! Twice! (It could use another go-over but hey- let's not lose our minds.)
Garden- green bean vines mostly pulled and given to goats and to chickens. Some weeding done. Some mulching with chicken-shit hay done. A few of these little fuckers picked: 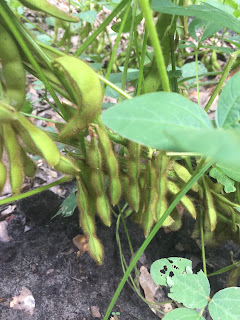 Not many. I had forgotten how tenaciously edamame pods want to stay on the vine. Plus- too hot. Hot, hot, hot and not in a Marilyn Monroe way.
Whatever they charge for an appetizer of steamed edamame in sushi restaurants is a bargain.
Trust me.
I did laundry. I cleaned and reorganized the utensil drawer. I threw away a bunch of stuff which has been living there for years for no apparent reason. BUH-BYE!
I took trash and recycle.
I found another new-hen egg.
And, I found this picture on the internet while I was taking a break. 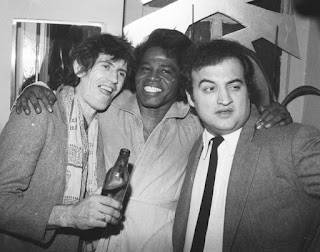 It was taken at Studio 54 and honey, that's history right there.
I sort of love Keith in his bad-teeth years. Here it would appear that he had gotten new front teeth but said fuck-it to the back ones. Can you imagine the partying that went on in those days? No. No you cannot and neither can I.
Well, maybe you can. How would I know?
And of course dear John is dead and so is James Brown whose teeth were magnificent!

Well, I better get in my kitchen which smells so fabulously of Fabuloso and white vinegar and make some supper.

This is such a boring post. I am sorry. I will try to do better soon.