Worlds In Which I Live

Woke up this morning feeling pretty rough, even though I slept fine except for waking up when the earth was shaking with thunder and then the electricity went out and electronic battery back-up things beeped and the fan quit running and then, sometime later it all came back on and it rained too.

So yes, I felt rough because of this cold thing but I managed to move slowly through the day, getting a few things done. I took the trash and went to the post office to get my mail and ran into a neighbor who told me about his son's emergency surgery last week for an abdominal thing. He said it was horribly scary but that the boy is fine and last night they went to the Mexican restaurant and he cleaned his plate so recovery is well underway. We talked about how a hundred years ago the child would have just died because surgery would not have been available. Mr. Moon's granddad died from a cut he got in the barn. One day he was fine, the next day, he was dead.
I am not the biggest proponent of western medicine in the world and how it and the pharmaceutical industry work but I sure am grateful for some of the strides that have been made. I know that Mr. Moon himself once got cellulitis so bad that they thought they were going to have to put him in the hospital for IV antibiotics and it was frightening as hell, watching the ugly redness move swiftly up his leg, despite the oral antibiotics he was on. I swear on the Bible and the Joy of Cooking that an antibiotic shot they gave him at Urgent Care caused the redness to start receding before we got out of there. Talk about your miracles!

Anyway, where the hell was I?
Oh yeah. Feeling rough. So I could not help myself but had to go out and pick some of those field peas and on the way I checked on the babies. They are so dang cute. And Dottie, despite not being the Bio-Mom of any of them, is being incredibly protective and taking such good care of them. Here they are. 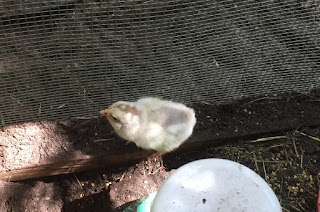 I am fairly sure that this chick is Camellia's baby. Camellia is the hen I got from Kathleen's flock and she's a darling chicken. She's the one who comes onto the porch every day and stares me down for treats. 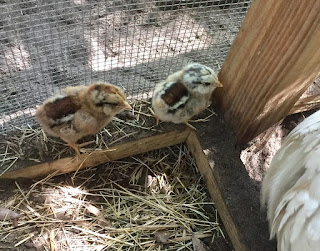 And these, I believe, are Violet's children. Violet is the little gray/lavender bantie hen.

I've said it before and I'll say it again, there is nothing in this world as cute as a baby chick and the cutest of the cute are baby chicks who are being raised by their mommy instead of say, in a bathtub.
Gosh, I hope they make it. I would just love that.

Anyway, after I visited the nursery, I went over to the side yard because I had a gut feeling about where Dearie might be and sure enough, he was hanging out in the neighbor's goat pen which is right next to their chickens. 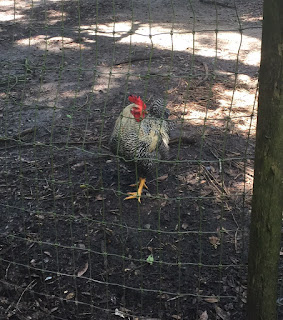 I assume he is keeping away from Mick because he's Mr. Jagger-Rooster's main threat. Gosh, he's a pretty guy. I said, "Hey, Dearie! Whatchu doing over there?"
And he said, "Plotting World Wide Hen Domination. What else?"

Maybe I was just hallucinating that part.

Then I picked a big bowlful of peas and Maurice helped me. I know I didn't get them all and the green beans need picking too and I didn't get one of them. 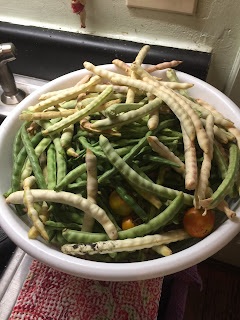 But that's what I did pick and for two hours I sat on the couch and watched The Real Housewives of New York City and shelled peas. It was a sort of heaven and I'm not even kidding. Since they're so big, it was easy to shell them and now I have some cooking on the stove and some are in a ziplock in the refrigerator. Lily thinks it's hysterical that I love those stupid "real" housewives so much. I just can't help it. They are my complete opposites in almost every way. They wouldn't know how to pick or shell a field pea if their lives depended on it. Hell, they get their make-up done professionally to go out for drinks. And I never wear make-up these days. Maybe once every three months. They get plastic surgery and Botox and lasered and I doubt they have a body hair on their entire bodies below the waist. And they seem to spend their lives drinking and eating tiny foods on giant plates and discussing each other and going to stay in fabulous villas in distant countries and if they have children, we never see them. Some of their biggest problems seem to be what social media is saying about them.
But hell- it's escapism sure and true, and some of them seem to have genuine hearts which have been tried by the fires of grief WHICH IS NO EXCUSE FOR MY ENJOYING WATCHING THIS BULLSHIT.
Still.
I love it.

So I did that and some laundry and got my house back to where I feel as if I am the mistress of it again and I watered my porch plants and even took a little nap and I am feeling okay.
I am home.

Hopefully I'll see the Lily-Babies tomorrow and maybe even make pancakes if I feel up to it. I just need not to kiss them or slobber on them, I guess. I miss them and their mama so.

Home and Little Richard is still walking around outside the hen house even though the rest of the chickens are in bed because he has to wait until Mick is on the roosting-doze like an opium addict on a silk divan because if Mick is still awake, he'll peck and chase him out again.

We're about to eat a mostly home-grown supper and I'm glad to be in Lloyd although I wish I could be everywhere at once.

Maybe in a parallel universe I am.