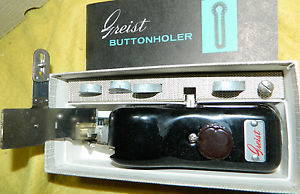 A few days ago I got out my handy Greist buttonholer attachment to make the buttonholes on a dress for Maggie, only to find that the gear which makes the buttonholer move was not working. It was making its regular little reassuring click noises but when it clicked, nothing was happening. I looked at it and messed with it to no avail and that evening, I gave it to Mr. Moon because it seems like it's a simple little machine and I felt certain that he could figure out why it wasn't working and fix it for me.
He took it apart and studied it and did this and did that and he could not figure out how to fix it either.
Ah-lah, I thought. And today I made buttonholes by hand which, let me just say, I know how to do in theory but they are not nearly as neat and tidy as the buttonholes made by the Greist buttonholer attachment.
So I got on eBay and looked up Greist Buttonholer and sure enough, there were a bunch for sale. I found one which is exactly the same model (by all visual accounts, at least) as the one I have now and I bought it. $16.95, free shipping, and I just got notified that it's already shipped and they upgraded me to Priority Rush and how exciting is that?
Ah, the internet is a beautiful thing sometimes.
And so very soon I will be back in the buttonhole business.

That was just about the most productive thing I've done all day to be honest. I had to wait for the Century Link guy to show up and figure out why my internet is so slow these days and of course, I was given the time frame of between 8 and 12 and he got here at 12. I can't complain. The guy is so nice and I recognized him from another time when I was having problems. He did what he could and promised to try and fix it at the "port" which is the place down by the post office where there's a bunch of stuff in a fence which I gather is where the magic really happens.

I did some weeding and gave the weeds to the baby chicks and their mama and finished the little Maggie dress except for some embroidery I'm going to do on the pocket. I also decided that I'd like to go to Apalachicola for my birthday which takes the pressure off of everyone and Mr. Moon got us a room at the Gibson Inn where we have not stayed for quite some time. We have had many, many honeymoons there in the last thirty-something years and it cheers me immensely to know that we are still capable and, indeed, excited, to have another.
That alone is something to celebrate on my sixty-third birthday.
Or any birthday, for that matter if you want to know the truth.

I am a lucky, lucky lady.

P.S. Isn't "buttonholer" a strange and almost pornographic word? I think so.