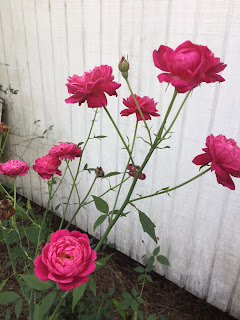 Well, the party's over. The last nine and a half pints of pickles have been jarred and all of them sealed with a pretty pop of the lid and it will be time to wash out the canner and the crock and put them all away until next year. 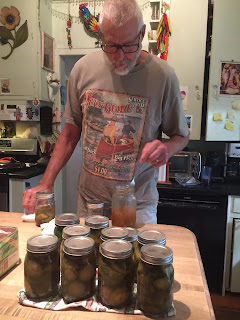 What in hell am I going to do with my spare time now?
Perhaps I shall make Magnolia June a trousseau.

But seriously, folks- when Mr. Moon's grandmother died, she left hope chests for her grandchildren. One for each. And they all had an entire set of china in them, quilts that she had made by hand, baby quilts that she had made by hand, tablecloths that she had made by hand, and I don't even know what all.
The tales I have heard of this woman are hardly to believed. She was a single mother of three for a long time after her husband died and she ran a little broom-making business, made money by sewing for people, saved all the scraps and made quilts with them, was the de facto doctor for those who couldn't afford the real one, cut hair, grew and preserved food, wallpapered her entire house regularly, including the ceiling, collected fine china, and made so many cakes for Christmas presents that she carried batter in buckets up to her daughter-in-law's house for her to bake because her oven just couldn't handle it all.
And there is so much more.
All of this in (I am not kidding you) Bug Tussle, Tennessee.
Lord. I think about how Glen's daddy met a woman through correspondence during the war via his sister who was working with her, came home, went out to Salt Lake City, Utah, met and married her, and then took her on a bus back to Bug Tussle. Glen's mama wasn't raised exactly rich but she did grow up with electricity and indoor plumbing and she was probably ready to head back out on the next bus going west as soon as she figured out what her living conditions were about to be with this tall, handsome man she barely knew.

Gosh. I did not mean to talk about Mr. Moon's parents or grandparents but there you go- one thing will lead to another. And Darlene Moon did NOT get on a bus back to Utah and she somehow adjusted to life in Tennessee with a mother-in-law who probably should have been running the country, and she and Jesse Moon (yep- that's where Jessie's name came from and her granddaddy was named for his aunt, Jessie Moon) went on to have three kids and somehow scratch out a living through hard, hard work and were some of the most loving, precious people I ever met and who raised three kids who grew up to be loving and precious themselves.

Well, I guess that was an American story although I think it's probably more just a human story.

It's the 4th of July and here's what some of my grandkids did today: 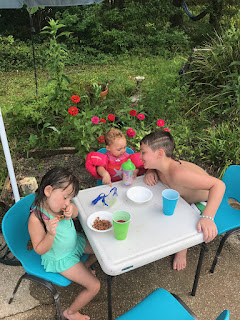 Ate delicious snacks after swimming in their other grandma's pool.
Mr. Moon asked me if I wanted to go watch fireworks with the kids and I was like, "What the hell? No. Y'all have fun with that."
But I think he's staying home. Eating pickles. Etc.

And here's a video of August singing a Rolling Stones song.


I will be seeing him in three days. We will be singing lots of songs together.

I would be his Beast of Burden any day.