Asheville- As Cool As It Is Charming 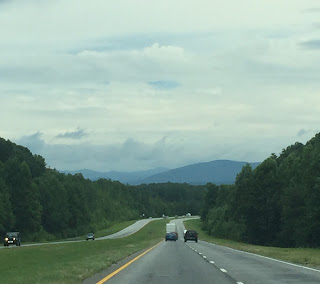 It occurs to me that Jessie and Vergil heading up to Asheville in the summers has enriched Mr. Moon's and my life immensely. I never would have known the joys of that particular mountainous hip spot if they hadn't. I mean- let's face it- I am mostly overly content to stay in my own little safe place in Lloyd, venturing out mostly to go to Tallahassee to the library, the grocery store, to have lunch with my family, and to do things with my kids and grandkids. I am not the adventuresome type and when I do leave home on trips, it's mostly to the same places. Mexico, Roseland. And then there was that trip to Cuba but I never would have done that if Lis hadn't kicked my ass into it and I am so glad she did.

It's such an interesting place. It is a place which is filled with natural beauty. The surrounding areas with their hills and mountains, their rivers and vistas- gorgeous. And because Vergil grew up there, we are blessed with the ability to go places and see things that many visitors do not. The view from his mother's house alone stuns me. It's cinematic in scope, it's stunning and dramatic and as alien to me, a flatlander my entire life, as being on Mars would be.
And it's good for me to go up there and experience that. Although I feel at home on the little island of Cozumel in a way I can't explain and will never quite feel at home on a mountain, it is a fine thing to be reminded that the view from a mountain top is as mind-expanding and soul-enriching as the view over a sea of blue-green translucence.

And then there's that other part of Asheville that I love- the hipness. The sense and feeling that it is a place where self-expression is cherished, where music and art and food and friendliness and breweries and amazing restaurants and bookstores and the love of the outdoors all come together in a very cool way. I joke that when I go to Asheville in summers, I come away knowing what the next hip thing will be.
Last year, it was bone broth!
I gleaned that one from the fancy uber-hip natural foods grocery store across the street from where we stayed last year at a beautiful AirBnB place near where Jessie and Vergil were staying then. I loved going to that place to observe the awesome hairstyles, the fantastic clothing styles, the way the mamas and daddies carried their babies and wore them on their bodies and walked with such obvious fitness and pure rude health that they radiated pure white light.

This year they are living with two friends of theirs who live in West Asheville, which is the new up and coming area of the city. I don't think we went downtown once this trip and it was, in fact, a different scene. The house where the Weatherfords are living is pretty much a typical Asheville house, filled with flowers in the front yard and there's a steep back yard with hens in a run down at the flat part of the property. 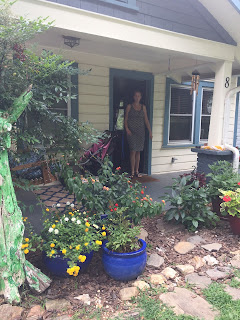 Real estate prices are going through the roof, even in the tiniest neighborhoods where the houses range from dilapidated shacks to charming jewels of lovingly restored cottages as well as fairly tasteful new houses. It's sort of a mishmash and the AirBnB we stayed in, although only about a mile and a half away from them, was in a real, true, All-American suburban neighborhood.
It was a bit shocking to me when we followed Siri's directions to it and drove down the driveway of a brick and wood house at the end of a cul-de-sac.
It was an interesting place to stay, I have to admit.
I am not going to name the listing and I am going to say right up front that it was extremely clean and the owners were exceptionally responsive to any and all needs we might have but it was, well...different.
Here's a picture of Mr. Moon reading to August on the bed the day we arrived. 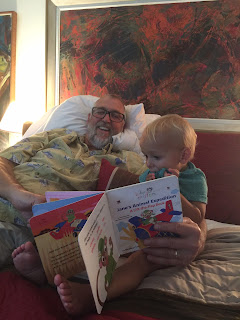 It was a basement apartment, remodeled and tricked out for the AirBnB trade. The ceilings were a bit low for my husband who felt closed in but of course that didn't bother me. The toilet in the bathroom was placed immediately in front of and facing the bathroom door. Honestly, that was the only place it could have been situated due to the space. But it was odd. The bed was in what I would have considered the living room- the room you walked into first while there was a futon that made out into a bed in another room which had an actual door for privacy.

But the backyard, as I have said, was beyond all expectations and if you're like me and enjoy sitting outside and listening to the birds wake up in the morning or sing themselves to sleep at night, it was perfect. And peaceful. You would never know you were a few blocks away from one of Asheville's most heavily traveled roads and that was wonderful.

But oh, my goodness. When I was flipping through the notebook of house rules and instructions I found this: 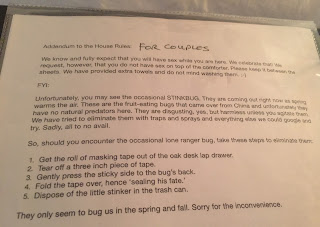 Can you click on it and read it? Because it's about the funniest thing I've ever read. And oh my god, we all joked about that for the entire week we were there.

And as Vergil commented, "Some things are really just best left unsaid."
And I will say they had plenty of towels and also, we didn't see any bugs at all so no need to go and measure out a three-inch strip of tape.

But isn't that the good thing about traveling away from home? Encountering new things, funny things, inspiring things, absurd things, things that make you think and open your mind and laugh and ponder and wonder at?

Here's another thing I'm wondering about- WHY ARE WE BEING SO LEFT BEHIND IN THE PUBLIX GAME?
We went to a brand new Publix outside of Asheville and it was stunning. We stopped in to get some sandwiches to take up to the mountain and it was like being in a Publix but maybe in a parallel universe. 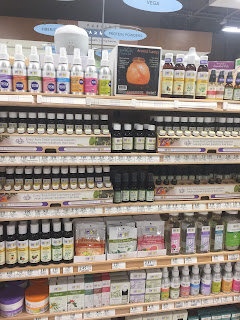 It was awesome and Publix is having to push its game because North Carolina has a chain of grocery stores that are wonderful. Ingles. Some of them have a Starbucks in the stores. Which is so cool for people who like Starbucks. And the people around Asheville expect a lot more from their grocery stores, I suppose, since they have such a wide range of options from wonderful tail-gate Farmer's Markets to those fancy natural foods places where styles and trends are set and noted.

I love the town. It's hip, it's cool, it's beautiful, it's southern. Here's the side-dish menu for a restaurant we had breakfast in twice. 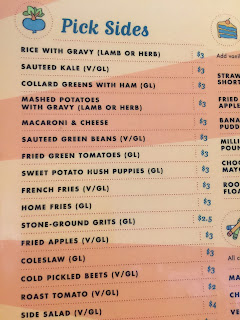 Oh yeah.
Plus, they brought August a basket of toys every time we went there and the food was awesome. 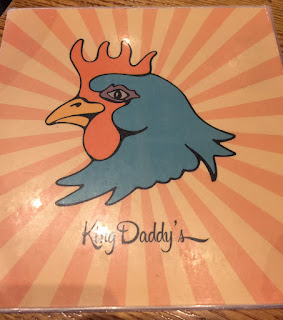 And you know I loved their name.

One of the best things I heard there was when we were in a very cool new brewery one late afternoon. Kids were running around and people were standing in line to get their awesome in-house brewed drafts and we ran into some friends of Jessie and Vergil's. Jessie was giving August a snack and offered some to the friends for their little girl and the dad said, "Nah, that's okay. We ordered from the food truck and have a few banh's comin'.
It was a Vietnamese food truck and business was rocking.

I will admit here and now that I've never eaten a banh in my life but if I wanted to, I could have eaten one that night.
And then we went to a Rasta place and it was delicious.

That's Asheville.
And as much as it breaks my heart when those people head up north every summer, I have come to love that they do because it means we get to spend time there too.

It's a beautiful thing for all of us.