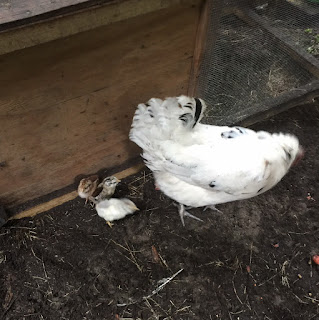 Dottie wallowed out a place in the dirt which has allowed her babies to scoot out of the box when they want to. They were following her around all day and it makes me a little scared but I know she's a good mama and if a snake did manage to get in she'd call them into the little cage-coop and sit on them. And try to kill the snake. She'd make some noise and that's for sure. Like I told Mr. Moon, the only way to really keep them safe would be to lock them in a metal box and we can't do that.
Oh, chickens.
Lily got a rare few hours off this afternoon because I took care of the kids. She went to lunch with a friend and then they did a little shopping and Lily went with her friend to a hair appointment with our Melissa. The kids were good and I kept them relatively entertained and very much alive so I did my job. We all went over to visit Dearie in the goat pen next door where he's still hiding out.
"Dearie! Come back!" said Gibson, who considers himself Dearie's human. Dearie is going to be one of the most handsome roosters I've ever seen and I'd like him to come back too.
"Why won't he come back?" Gibson asked.
"Because he doesn't want Mick to kill him," I said.
"Why would Mick kill him?" he asked.
I pondered this question and how I should answer it and said, "Well, roosters like to be the only rooster."
"Why?" he asked.
"Think about it," I said. "What if another man came into your house and said to your daddy, 'I want to be your wife's other husband and your kids' other daddy.' Do you think your daddy would like that?"
He didn't even have to think about it.
"No!" he said.
"Well, that's sort of the way it is with roosters. Mick doesn't want any other husbands or daddies around. He wants to be the only one."
And that is the truth of it. And I know I should get rid of Joe Cocker and Little Richard too because they are just causing all sorts of upset in the flock and besides that, as Jessie pointed out- it's not fair to the hens who bear the literal brunt of the roosters' urges.
But dammit. No one needs any more roosters. NO ONE. And I just can't bear the thought of us eating those guys. I have developed an affection for them and I'm slightly in love with Dearie myself.

And that's enough chicken news. The rest of the day was spent dispensing snacks and sweeping up broken things and laughing with the kids. I was most gratified when Owen did a puzzle by himself and Gibson played solo-Monopoly with his own rules for a good forty-five minutes and I was able to focus on Ms. Maggie. 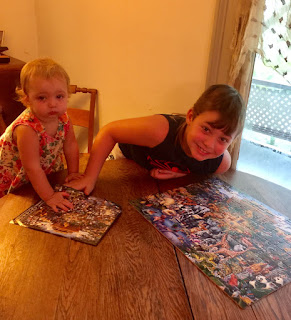 I tried to get her interested in the big wooden alphabet puzzle but she's way too young for that.
I have to tell you though, that she did do something which sort of amazes me. She found the sidewalk chalk in the library and took four pieces out to the porch and this is what she did with them: 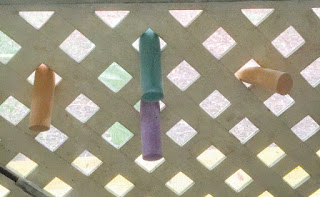 That's the wooden lattice work on the back porch screened door and she stuck the chalk into some of the holes of it. It's so precise and even color coordinated that I have to wonder if that was merely a coincidence or whether she carefully and purposefully arranged it that way. If so, she may be an artistic genius.

Well, they're all geniuses in one way or another and so are you.
I guarantee it.

Let's all embrace the genius within us and may our dreams channel our most creative and happy thoughts tonight. Okay?
Okay.