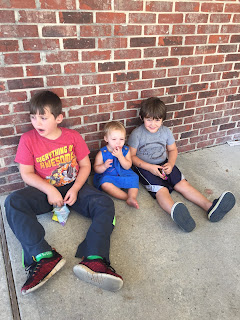 Woke up this morning after too much sleep, dream-drained, dream-dazed, and dream-drugged. Walked outside to find the day as strange as my dreamscape had been, sixty-something degrees, first day of August.
Unreal and previously unknown but not unappreciated.

All day I've felt weepy and whether that's because of my dreams and what they said to me (It's a lie! It's all a lie!) and not really fit for anything but we'd planned to have lunch together, Lily and the kids and Hank, and I wanted to go the restaurant where May works because I miss her too much. Hank couldn't make it but Lily's friend Lauren did and we drove up to the north side of town and got to see our sweet May and had the restaurant almost all to ourselves which was good because the children were being what you might call unruly. School starts in about two weeks and I am pretty sure that Lily is ready for that to happen as are most mothers of youngun's by this time of the summer. Despite being unruly, they were sweet and Maggie was wearing the little blue dress I made her and after lunch we went to Trader Joe's and Owen held my hand and Gibson didn't kill anyone with his miniature cart and Maggie survived as did we all and when I left their house, they all kissed me good-bye except for Maggie who had finally fallen asleep and was taking a very much-needed nap.

Trixie truly appears to be gone. I saw her last night as all of the chickens were gathering for their nightly pre-bed party where they eat and drink and sit on the fence and talk about things and jump down and do a little more scratching and the roosters try to get a little something-something before they roost. She was right there but Mr. Moon said she wasn't in the roost when he went to close them up and she wasn't in the tree and I haven't seen her all day long.
I'm not going to officially call her dead yet because god knows that chickens sometimes disappear and then show up again but the old lady has always been a faithful returner to the nest at night time. And she's so very old for a hen.

As I write this, I see Dearie showing up to gather his ladies and my, but he is getting big and beautiful.

I still feel weepy. I've snapped at my husband for absolutely no apparent reason two or three times since he got home and then apologized and teared up and hugged him and told him I love him and I do. I've also snapped the last of the green beans except for the ones in the freezer and set them to simmer with a little olive oil and salt and pepper, pure as the driven snow, and we will eat them tonight. I did a bit of weeding in the garden but the mosquitoes were fierce in their hunger and although I had planned to do some picking, I just couldn't deal with it and threw the weeds to the little family in the coop and came on in the house. As I weeded, I came upon the wild grapes that have dropped from the vine in the overhanging trees and I tossed those over the fence to the hens keeping me company and they beaked them up and ate them with great relish.

And that is that for this day, the first day of August. It is still relatively mild in temperature. Tomorrow will be a different day.
Some evenings I end the day by saying I am grateful for the day, for the love, for the life, for the riches.
I could absolutely say that now but mostly I am grateful that it's almost over, this dream-infected day, and that I will have another opportunity to sleep and perchance to dream better dreams, and the raveled sleeve of care will be knit up in better fashion.