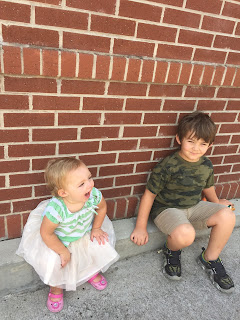 I have been struggling a bit lately and I'm sure it's everything all together, you know. It's the time of year when I had my first huge anxiety episode and anniversaries are always hard whether your mind remembers or not. The body does, just as it remembers the anniversaries of the deaths of people we love.
It's about to be my birthday which is also a hard time for me. Always is. The age I'm about to be- 63- sounds relatively young when I apply it to other people but when I apply it to myself, I am astounded that I'm still alive and the time has certainly passed where I will die young and leave a beautiful corpse.
Which I suppose is a good thing but still- sixty-three? Really? And please don't tell me I'm still young or that we are only as old as we feel.
I feel fucking old and I look fucking old and I feel the way I feel so there you go.

Plus the heat. Every time I got out of my car today I felt as if my skin was simply going to sear like chicken skin on an overly hot grill and I remembered that I need to make an appointment with the dermatologist to get all of these suspicious places checked out and honestly, I think he'll probably just say, "We need to remove your entire epidermis," and besides that, if there's anything harder for me to do than calling a doctor's office to make an appointment, I'm not sure what it is.
Plus the everything. I just feel old and useless and ugly and taking up space that some precious new baby in this world would be more deserving of. Space and resources. Water and food. I ain't no Bodhisattva, y'all. I take up my share and then some.

Oh well. I guess as long as I'm still entertaining to my grandchildren and not a personal burden on my kids I'll be okay with sticking around.
I should try to eat less, though and at least remember to not run the water while I'm brushing my teeth until I actually need it to rinse.

I went to town today to get some inches chopped off of my hair. It's just been bugging me. Long and lank and doing no good for nothing (not unlike me) plus I wear it up all the time and in the summer, if I do anything outside I'm going to sweat so much that my hair is wet until I go to bed and I've frequently wondered why it doesn't mildew.
And then there's the Melissa factor.
Melissa, as you know, is our hair-lady, our friend, our light in the world. Just being in her presence is enough to make you feel better about everything, including yourself.
So I went to see Melissa and I showed her how much I wanted cut off and she said, "Oh, no. Not that much," and then she showed me why I didn't want that much cut off and I agreed and she cut off a goodly amount and now at least it won't take as long to dry. I looked at the pathetic lanks of my hair on the cutting floor and was glad to be rid of that stuff which was at least five years old. 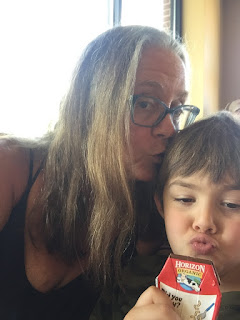 It must not be too dramatic a change because when Gibson saw me he said, "Mer, I like your dress!"

I met Lily and Gibson and Magnolia June for lunch. Owen is at his first real sleep-over party with his friend Chase, whose birthday it's about to be. He and Chase are BFF's and love each other dearly and Lily said he was fit to burst when she dropped him off. Chase has a brother, a dog, AND a pool, plus they went to a movie. He is never going to want to go home. Never. Ever.

So I got to spend time with Gibson and Maggie and Lily and that was fun. Gibson is the cuddliest boy in the world. I asked him, "Gibson, why do you cuddle me so much?"
"Because I love you!" he said.
"I love you, too," I told him.
And Maggie just wanted to be held and to be fed beans off my fork and eat ice cream from a cup without a spoon and when we were leaving, she went up to a lady who was seated nearby and kept saying, "Hi! Hi!" and the lady ignored her but another lady saw her and said, "Adorable!"

She really is. Can you believe that tutu skirt? 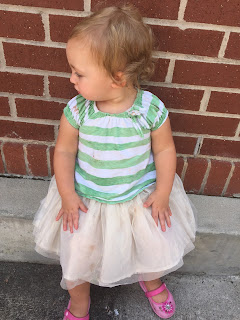 That girl can carry off a look. She has style. She has grace, even with ice cream on her face.

She is precious, that Maggie girl.

And they all are and soon there will be another to love on. Mr. Moon told me that he FaceTimed with August today who asked for MerMer, just as Maggie asked for her Boppa, and they had a good conversation with lots of thrown kisses.
"Moah!" August is reported as having said.
And his Boppy threw him moah kisses, of course.

And so there you go. Another day in the life of one old lady. I have a lovely chicken in the oven (not one of mine, thank you very much) with a tiny bit of stuffing in it. I believe I will fake-fry some okra tonight. Every day I go out and cut what is ready and I have what I believe to be two servings worth. I really want to get my hands on a big ol' bucket of the stuff and pickle it all.
I probably could if I just set my mind to it.

The mango/peach/cherry pie was fine. I only had a bite. Honestly, the joy for me is in the baking. Mr. Moon drove ALL THE WAY TO PUBLIX before dinner last night to buy vanilla ice cream to put on it. I was chopping vegetables for the salad when I got a phone call from him.
"You'll never believe where I am," he said.
Honestly, I thought he was still at the convenience store.
"Where?" I asked.
"On the interstate," he said. "On my way to Publix to buy ice cream which is worthy of that pie."
I am not kidding you.
He bought a vat of Haagen Dazs.

I love that man.

He's going fishing tomorrow and hopefully, we'll be eating snapper soon but fishing is fishing and catching is another thing all together. I am almost 63 years old and if I know one thing, that is it.