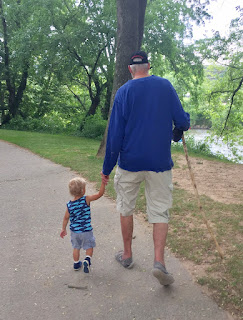 Here's what we did today:
We loved on August.

I think he is happy we're here. Every time we leave his sight and enter it again, he shouts, "Hey MerMer!" or "Hey Boppa!" as if he hasn't seen us for days.
He does the same with his mama and his daddy but it sure does make us feel special.

Vergil keeps trying to think of fun things we can do but honestly, just hanging out with them is precious. We ate breakfast at their house today. August had requested waffles and that's what we had. They were delicious. And we played and read books and then August got sleepy because he gets up early and our breakfast ran late. 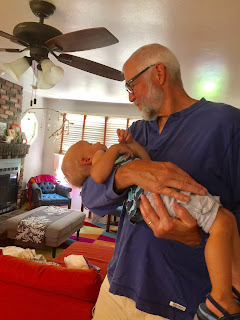 So we just took a little walk through the neighborhood with August in the stroller and he fell asleep and Jessie and I went and got pedicures and when we got back, August was up and happy as he could be with his daddy and his Boppa.
I swear, that boy loves his Boppa to pieces.

After he woke up, we went to a local park on the French Broad River and August ran and ran and Mr. Moon threw a line in the water and August and Jessie and I went to the dog park and visited with the doggies and then it began to blow and thunder and rain so we ran to the car and went to a brewery.
Asheville has more breweries than Lloyd has churches.
And that's a lot. 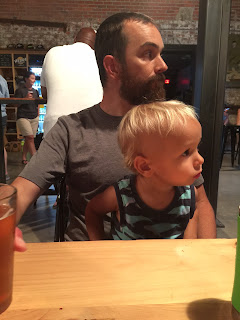 We had a beer and then went on to supper. If there's one thing that Asheville has more of than breweries, it's amazing restaurants.

It's funny. I really don't feel like writing much. I feel quietly and sweetly full of simply being exactly where I am, doing exactly what I'm doing.

Okay, our AirBnB is a little bit...well, I'll write more about it later, but I will say that the backyard is heavenly. A huge park-like lawn where lightening bugs dance at night and there's a creek which runs down the back of it. 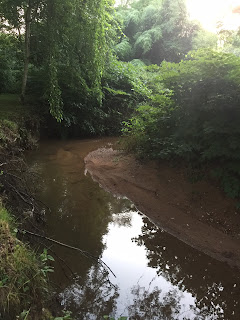 And it's cozy and comfortable and has everything we need.

Tomorrow we're supposed to float down a river.

But if something comes up and that doesn't happen, whatever does happen will be perfect too.
I just have that feeling.